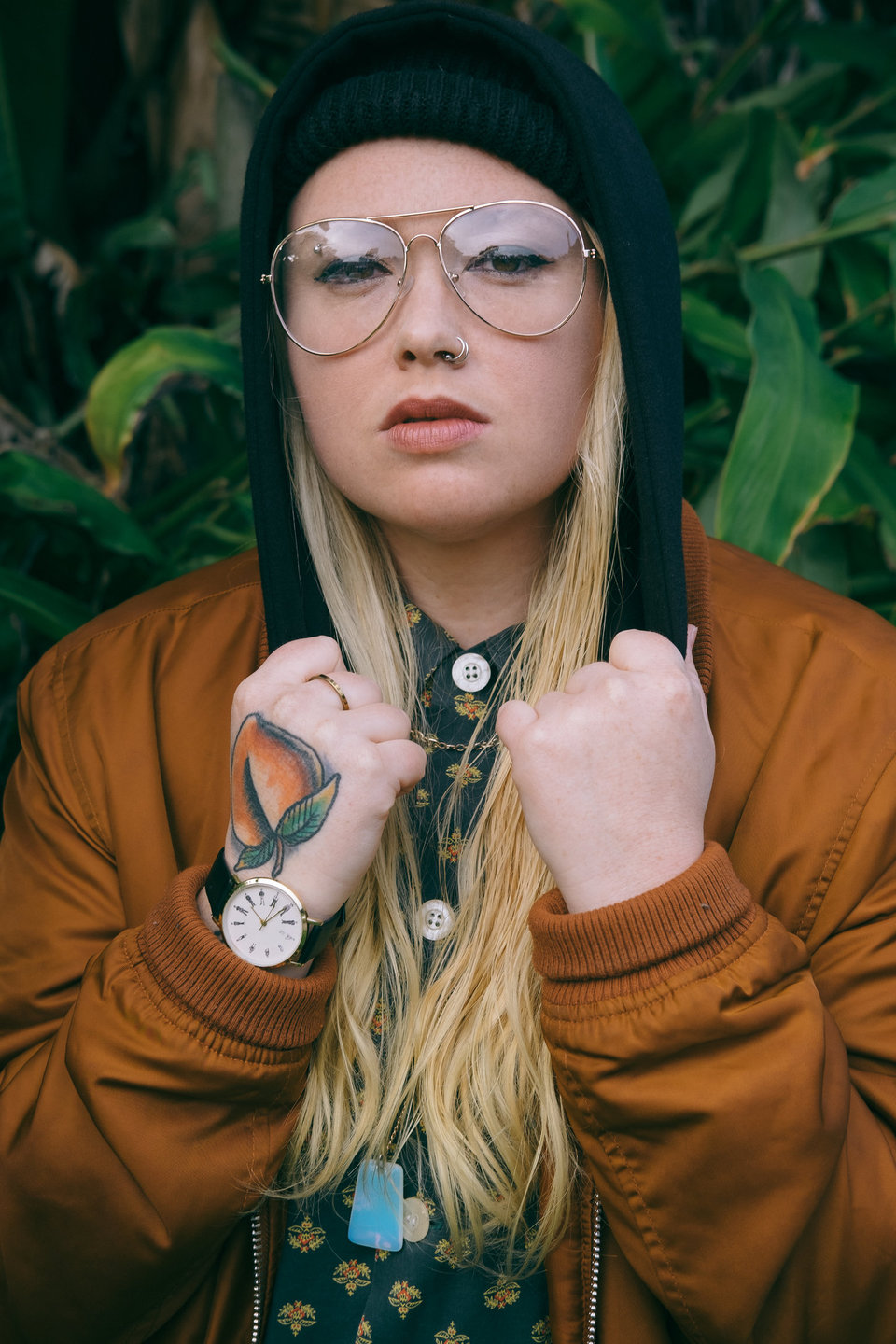 à la Beast’s debut song is tailor-made to delineate those who have been forgotten by the beau monde and their society at large. He’s from Berlin, Germany, but à la Beast travelled to an abandoned old hospital in Woodstock (a suburb of Cape Town, South Africa) with his entire cast and crew to film his video for ‘Justice’. He spoke to Kaltblut Magazine about his experience there:

We learned that during the summer on the ground floor of this 4- story building, a group of people had squatted the place. Due to unaffordable housing for a lot of regular people, they took a stand and moved in – Mothers with kids, individuals, families – they started a political movement, still small. They hold meetings to be transparent and to discuss and form statements about their situation. They were a very engaged group of people. We asked them if we could film the video one day and they let us. We obviously donated to their cause. In our first talk, Patrick, the spokesperson if you will, talked about what they were doing there and explained that this was also about justice for the forgotten. You can imagine how the song and reality collided in that way. I was deeply touched, and this was probably the most meaningful moment music has given me,” says à la Beast.

Two fervent female emcees exchange verses on their co-written song called ‘Come Correct’. Gifted Gab, an emcee from Seattle, Washington, and Blimes Brixton, an emcee from San Francisco, California, released their song on October 29, 2017. This duo has flawless timing. Throughout the song, whenever one emcee finishes off her verse, the other emcee’s right next to her, and she’s jumped in on time to deliver her verse. Gifted Gab and Blimes Brixton are one with their tune’s tempo.

I can take it if you gone dish it. I can break your bitch and give her back, just on some pimp shit,” raps Gifted Gab.

Then, Blimes Brixton comes in “We gone run up, I might hit you with a brick quick. Plus you know I’m with my sister Gab and you know she gifted, click click.”

San Francisco duo, New Spell, released their vivid and thought-provoking video for ‘You Win’ last month. Japhy Riddle and Brandon Bellomo created the visual. In the video, Leanne Kelly finds herself standing inside a phantasmagoric and ramshackle room. She moves into another room.

Now, Kelly’s face to face with a doppelgänger. Her doppelgänger’s dressed in a white dress. It’s holding a classic wooden frame. Through the frame, Kelly begins to see the room alter to a pristine condition, like magic. Some human beings tell white lies. It’s a fact. Some lie to avoid talking about specific topics, or to alleviate and shift blame. Some people lie for sport. Still, despite the knowledge that their lie will without a doubt deceive someone, some people continue to tell lies. I don’t endorse being a two-faced liar.

You can downright mislead, distress and inconvenience someone by being dishonest with them. I have an index full of sentences I could use to describe the consequences of lying to someone. But, I’ll end here with a rhetorical question. Pretend that you’ve just found out that someone has lied to you. Would that change the dynamic between you and the person who’s lied to you? Does it depend on how malicious the lie was? Would you ever forgive them for lying?

Exo Moda has been working on his debut album for the past two years. His debut song, ‘Peyote in the Desert’, features vocals by London, the United Kingdom-based singer JoyAimee. ‘Peyote in the Desert’, was released on February 2, 2018. It’s a preface to the new sound Exo Moda has envisioned and pioneered over the last two years. Using his biography on his Facebook page, Exo Moda describes the sound that he’s developed. He writes,

Chasing the perfect musical trip, Exo Moda makes tracks that could fit well as a soundtrack to a Quentin Tarantino or Sergio Leone movie, filled with Native Americans dancing around campfires, banal futuristic bad guys on mescaline and intense, distorted trip scenes riding a motorcycle through a desert. Analog bass lines, ruffer than ruff breakbeats, beefed-up guitars and a pinch of what-the-fuck lay the foundation for the Nouvelles violences in sound he creates thoughtfully in his studio.

This video, created by Berlin, Germany based animator Trippiesteff, is hallucinatory. I have never used and don’t endorse using hallucinogenic substances carelessly or irresponsibly. But, I imagine that watching this video could help you understand what kind of supernatural baloney you might see after you ingest peyote (Lophophora williamsii or peyote is a small, spineless cactus with psychoactive alkaloids) in the desert.

You can catch a glimpse of an overcast birds-eye view of Toronto, Ontario, Canada at the beginning of Kai Exos’ newest video for ‘Fire & Brew’, directed by Exos and Indrani Pal-Chaudhuri. Indrani is an award-winning internationally renowned director and photographer who is “renowned for her iconic imagery and visionary storytelling, collaborations with Lady Gaga, Beyoncé, Jennifer Lopez, Alicia Keys, Jay-Z, and Kanye West” according to Shinjini Das of Huffington Post. The video for ‘Fire & Brew’, was uploaded to Kai Exos’ Vevo on February 2, 2018. ‘Fire & Brew’, is Kai Exos’ newest song. It was released on May 12, 2017. Exos has a pleasant voice and he’s coquettish when he sings the 2nd verse “Miss you much. Mostly the you-know-what of yes when you press in. Move through the room. See the rise and the fall. Rest your head on my heart. Mister K. A. I., no artificial, eh. Intelligent girl. Shawty won’t you swing my way. One for me, two for you. Black 36, Ivory 52.”

Justin Timberlake released his fifth studio album, called ‘Man of the Woods’, on February 2. Timberlake confirmed that he was labouring on a new album in a radio interview in May 2016. He said,

I think where I grew up in America has a lot of influence – Growing up in Tennessee — very central of the country — Memphis is known as the birthplace of Rock & Roll, but also the home of the blues, but Nashville’s right down the street so there’s a lot of country music.” Before the album came out, Timberlake posted a minute-long teaser trailer for “Man of the Woods.

In the trailer, he talked about the inspiration behind the fifth studio album:

This album is really inspired by my son, my wife, my family, but more so than any other album I’ve ever written, where I’m from”, said Timberlake. He continues, “And it’s personal.” It’s no surprise that Timberlake is living his best life in the Greenwood with his southern frontierswoman sweetheart in his video for ‘Man of the Woods’.

He puts his finesse as a dancer on exhibit here. Timberlake even doo-wops. It’s a romantic video as well. I consider myself a man of the woods. So, to me, a perfect date with a woman looks just like the date Timberlake went on in his video for ‘Man of the Woods’. I’d re-create this date for a loved one, and I’d be so proud of myself for it.