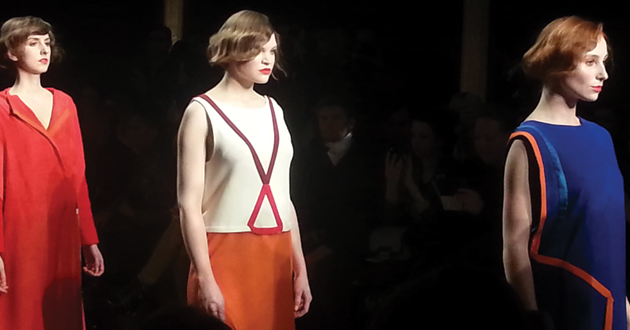 Besides the professional events, Amsterdam Fashion Week “Uptown”, there is also a public programme called Amsterdam Fashion Week “Downtown”. The Downtown events mainly take place in galleries, shops and clubs in the city centre of Amsterdam. The Uptown activities can be found at the Westergasfabriek a former gas factory, where the old gasholder is used for the biggest catwalk shows.

The last week of January the Westergasfabriek hosted the 18th edition of the AFW. In total, 35 catwalk shows took place, including shows by The People of the Labyrinths, Spijkers & Spijkers, Claes Iversen, Dennis Diem, Winde Rienstra, Tony Cohen, Melissa Siegrist and Marga Weimans. Although well-known designers and commercial brands presented their collections, the most important names in Dutch fashion, Viktor & Rolf, were missing. For Viktor & Rolf, the AFW simply isn’t big enough and they prefer to show their collections in Paris where the international fashion buyers can be found.

Also designers Iris van Herpen (popular with Beth Ditto and Björk) and Jan Taminiau (well-known for his futuristic platform shoes worn by Lady Gaga and Beyoncé) seem to have outgrown the AFW and were missing this edition, but they have made way for a new generation of talented designers. GrungeCake attended the AFW for one day to check out some of these talented designers, soak up the atmosphere and visit a couple of shows.

The first show was a combined presentation of the collections of Dido Yland and Allan Vos. Dido Yland studied at ArtEZ in Arnhem, a prominent Dutch institute for Fashion Design, and graduated in 2009. For her women’s collection A/W 13/14 Yland was inspired by the British drama series Downton Abbey, which is set in the roaring twenties. The colourful collection, a 21st century take on art-deco fashion, got the appropriate name “bearcat”, a 1920’s word for a fiery girl.

Allan Vos studied fashion in The Hague and in London and he did an apprenticeship with designer Yoshiki Hishinuma. Vos is well-known for his costume designs and theatrical creations, but he decided to switch to fashion design for men, this was the second menswear collection he showed at the AFW. Vos was also inspired by history, but went back even further in time to the Napoleonic era. The result is a stylish, yet sexy collection, staying true to Vos’ theatrical background.

Next, Sjaak Hullekes showed his menswear collection A/W 13/14. It was not as flamboyant as Vos’ collection, but it will appeal more to a broader audience. Sjaak Hullekes graduated from ArtEZ in 2005, and was introduced during the AFW in 2007. He has participated in the Tranoï and White showrooms in Paris and Milan. Hullekes’ designs looked comfortable and to emphasize the “prêt-à-porter” character of his collection, the models jogged, ran and even cycled on the catwalk, making it a fast-paced show indeed.

Sophie #1234567+ followed next, with their women’s collection A/W 13/14. Behind Sophie #1234567+ are art director Saskia Kruis and general manager Roald van Dijk. They first entered the international high-end women’s fashion market during the A/W 11/12 season. They cater to the modern career woman who wants to combine style with comfort. Their A/W 13/14 collection certainly looked very comfortable, but also stayed on the safe side, regarding both colours and designs.

The most spectacular show of the day was definitely the one by Edwin Oudshoorn. Edwin Oudshoorn is also a former ArtEZ student. His designs are highly haute couture: gorgeous materials, and breathtaking craftsmanship. He absolutely has a sense of drama; he has presented his collections at the Rijksmuseum in Amsterdam, the Teylers Museum in Haarlem and the Musée de la Vie Romantique in Paris during Couture week. His sense of drama was also apparent during the catwalk show of his women’s collection A/W 13/14 “Remembered Colours”. As the decor showed the changing seasons, the most amazing designs were shown. From lovely summer dresses with flowers and butterflies, to dramatic black sequined ball gowns. Oudshoorn really swept us of our feet. What do you think?