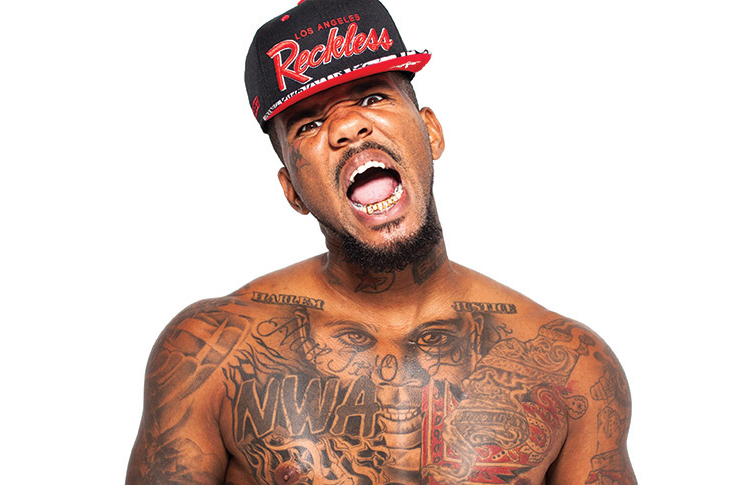 “Just Another Day,” a song on Dr. Dre’s latest and final album ‘Compton’ starts off with a loud whistle and a woman screaming “It’s Muthafuckin’ game time!” And over a bumping beat that serves as a score for a scene in the ‘Straight Outta Compton’ film, The Game raps as if his life depended on it. This was the moment he’s been waiting for all his life: to rap on a Dr. Dre album. That attitude and hunger are carried over to his new double album ‘The Documentary 2’ the sequel to his debut album ten years ago.

I was a little doubtful that this album would match The Game’s classic debut especially with songs like “Ambitionz Of A Rida” released before any other singles. Thankfully that song didn’t make the album and doesn’t reflect this great body of work. Like any Game album, there are a lot of features (Drake, Kanye West, Future, Q-Tip, Ab-Soul, Snoop Dogg, etc). But the huge lists of guests never overshadow the main star.

“On Me” featuring Kendrick Lamar opens up the first half of the double album with the two Compton natives rhyming over a sample of Erykah Badu’s classic song “On & On.” This is the second time The Game featured Kendrick on the opening track to his album (“The City” on ‘The R.E.D. Album’ being the first) but on this collaboration The Game chooses the right flow to attack the track not allowing K. Dot to outshine him. “Step Up” featuring Dej Loaf and Sha Sha is high energy. The track uses a familiar sample used in Tupac’s “I Get Around” but originates from a Pete Rock song entitled by the same name, “Step Up.” Sha Sha sings a beautiful hook borrowing the flow on Brandy’s classic “I Want To Be Down” to channel the gangsta mind state of The Game.

“Don’t Trip” features Ice Cube, Dr. Dre and will.i.am rhyming over an old school beat, with Game claiming he’s ‘Boo like that’ referencing Digable Planet’s “Rebirth Of Slick (Cool Like That), replacing B for Blood instead of C for Crypt (for the slow people). “Standing On Ferraris” features Diddy ad-libbing while Game spits over a sample of Jay Hawkins “I Put A Spell On You’ but most of us will recognize the sample as Biggie’s “Kick In The Door.” There’s a serious golden age vibe with the first four songs, but shortly the album takes a few different turns sonically with West Coast bangers and soul samples.

The second half of the double album starts off somber on “Magnus Carlsen” with Anderson .Paak singing a verse that goes into a chorus asking “What’s Happnin?”

Game goes further asking more questions molding the song into an updated version of Marvin Gaye’s “What’s Going On?” Then like a switching flipping “Crenshaw/80s and Cocaine” featuring Anderson .Paak and Sonyae plays and The Game gets back in ruthless mode. “Gang Bang Anyway” featuring Jay Rock and Schoolboy Q has the three detailing the mind state of Los Angeles gang members.

“The Ghetto” featuring Nas and will.i.am specifies the different ghettos around America and the world. Lil Wayne croons on “From Adam” providing the hook while the Game gets emotional over a lost friend. Now in the middle of this album there’s a section of five songs that lighten up: “Quiks Groove” featuring DJ Quik, “Outside” featuring E-40, Mvrcus Blvck and Lil E, “Up on the Wall” featuring Problem, Ty Dolla $ign and YG, produced by Battlecat, and “My Flag/Da Homies” featuring Skeme, Jay305, Mitchy Slick, Joe Moses, AD and Ty Dolla $ign produced by Dj Mustard. The posse cuts maybe the weakest part of the project, but to be clear the songs aren’t bad. The songs just may cater more to West Coast enthusiast than the casual listener.

One of the sweet moments comes from “Like Father, Like Son 2” featuring Busta Rhymes and Game’s two oldest sons. The same two boys who were on the album covers lend their voices to their father’s ode to them.

The Game dropped the double album as separate discs one week after the other. And even though the albums go together they could actually stand as separate projects. This album is actually one of the best double albums in a long time serving as The Game’s best work to date. Many times when artists make sequels to their classic albums they could either turn out being strong as the predecessor or weaker leaving fans scratching their heads. The results could lead to a ‘Stillmatic’ or a ‘The Marshall Mathers LP 2.’ For Game, the former is the result.

‘The Documentary 2’ is similar to the original in tone, having a West Coast, East Coast universal vibe. The themes, subject matter, production, and guests are similar. Even “New York, New York” is dedicated to Stephanie Mosely who was killed in 2014 by an old friend of The Game mirrors him dedicating “Dreams” from his debut to Yetunde Price, the sister to Venus and Serena Williams, who was killed during a gang shootout in Compton. ‘The Documentary 2.5’ sounds similar to ‘Doctors Advocate’ (Game’s second album) in tone sounding darker with a West Coast sound from top to bottom. And again the themes, subject matter and production are all recognizable in a fresh new way.

It’s important to remember The Game held down the West Coast before we had this resurgence of artists like TDE, Odd Future and hundreds of others. With this project and ten years in the game, his spot is surely solidified.

The Documentary 2The Game