Being a ‘broke’ artist is a lifestyle that most creatives know all too well. We also understand that you can’t pay for taste, even if you have a money machine to print the shit. Additionally, I don’t care what anyone says: Parking in a spot and taking up two spaces is just an asshole thing to do. It’s funny as hell when it is happening to others, but a bitch when it’s happening to you. I guess, the name ‘Screwface’ is apt, then. With that sort of attitude, you’re bound to catch a case or a plane ticket out of town for aggravated assault.

Some days before wrapping up the bill for GRUNGECAKE’s official SXSW artist showcase in Austin in 2017, I learned about F L A C O, the Indiana-native recording artist with an attractive Rap/Punk flair that I enjoy. I added him to my bill because his flow and look are interesting.

Ending with an audio clip about entrepreneurship mirroring pimping, San Diego-native recording artist Herb Sims unleashed a wonderfully produced track entitled, ‘Blackwell Lane’. With a flow and sound reminiscent to fellow Californian Blu, the talented musician raps about “chasing profit” and “fighting off the demons”. Listening to countless release is a pastime for me, but there’s something about the way musicians, who also produce and are on the technical side of the music, sounds like when they rap. Additionally and unfortunately, hoping that the police doesn’t come to get him is a harsh reality that most, if not all, African-American and Latin men face in America. Some of the track’s topics are heavy, but the euphoric production balances it out. Play this one loud when you’re chilling with friends or on a car ride. It’s a banger.

We all go through life, but not all of us work hard enough to earn a ring. In the grand scheme of things, other people will hold you in higher regard when you do. Hey, I don’t make these things up. Some years ago, I had a friend in Connecticut who used to call me and would say that people should kiss my metal collectables—figuratively because of all the things that I was secretly working on, then. The thing is, no one could kiss my ass, or rings, because I intended to remain private. I don’t know where he is now, but this song reminds me of him.

I learned about the Trap track by way of my partner-in-crime, Two. My favourite parts of the record are when he says the “only place we be together is in your dreams, bitch, and the only way we gon’ be seen is not be seen, bitch” and the hook, of course. I’m here to tell you, it is a rough world. I have had some of the craziest relationships with men. I won’t get into detail, but here’s what I will share. Ironically, if you treat them (broken men) like what he described, it’s likely they will want to hold onto you forever. I’ve been proposed to and I’ve moved in with a man behind that behaviour. (We’ll get into that another day.) Furthermore, I don’t know if RaRa plans to make a music video for this song, but he should.

Keeping it on the West Coast, the bass line on the song bearing the name of The Golden State is like an advertisement for why you should plan your next vacation there. In California, the weather is warmer. It’s sunny all year, and pretty. I used to visit once or twice a year for business. On a personal note, it has been quite some time since I’ve been to California, but there’s nothing like that scenery—or the people. You ought to have the greatest self-control to deal with select humans in Hollywood/DTLA. Without further ado, stream the catchy record below.

Yesterday, one of my friends, DJ Chophead sent over a video by a South Philly artist named YOG JP. I’ll be honest. When it arrived, I was on the move, so I couldn’t give it the attention it needed. Nonetheless, I shared it. According to DJ Chophead, ‘MIRACLE’ isn’t from a full project, but I think it should be. Recently, he released a seven-track EP entitled, ‘Halftime’. I’ll admit. Figuratively, it didn’t pop off of the page, but with the addition of a visual, it’s different. Most importantly, within the lyrics of the song, he admits to thoughts of suicide. If you’ve been paying attention to the news cycle, it has been common lately.

For some of us, music and purpose are what help us to cope with difficulties in our lives. Whatever is your escapism, embrace it and hold on for as long as you can.

NomaD – King of the Jungle (Submission)

How many times could you listen to the same rhythm without wanting to end it all? If you came up with a number, multiply it by any protracted number you know. That’s a smidgeon of what it’s like to listen to music that fits the mould, all the time. With a glimmer of hope, comes a record that revives older music, giving them new meaning. Specifically, in Dancehall, it is welcome. That tradition carries with NomaD’s on the classic ‘Dangerous’ rhythm by Conroy Smith. On the track, he talks about everyone wanting to be the leader, seldom wanting to help the one in charge.

I think the concept for this video is genius. Having four different realities, or perspectives is unique. What you want to happen is usually based on what you’ve experienced mixed with your fantasies. What you feel inside is what you’d like to play out, hoping that the other person feels how you feel. I’ll speak for myself here. When I am in my head, I work things out from extreme ends for mental balance. To be frank, it is a defence mechanism. Lastly, the reality is the conscious space that I believe many people have the hardest time. Experimental at best, TRUVONNE allows her viewers to connect based on their experience to come to their judgement.

If you are a fan of Alicia Keys, you might like TRUVONNE. The Phoenix, Arizona-based artist has an intimate visual for ‘CRAZY LOVE’. You should watch it below. 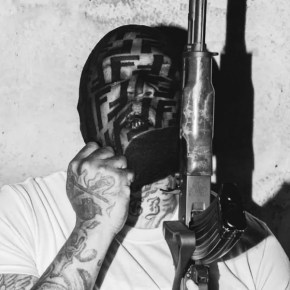