A Post-SXSW list because it’s never too late to discover new artists. 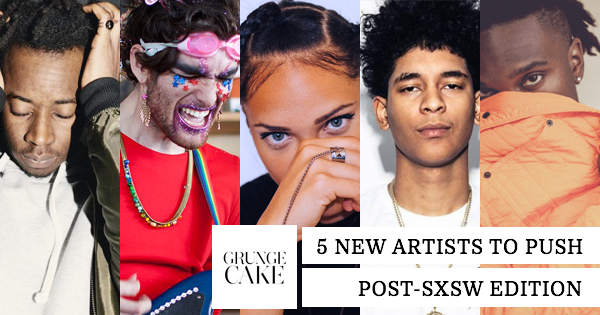 Anticipating SXSW 2017 and all that we have in the works, I visited the film, interactive media, and music festival’s website. Looking for fresh faces to admire, and artists to observe when we’re in Austin, here’s a list of artists that piqued my interest.

My intention was to publish this article at the start of the SXSW Music concerts, but one thing led to another. Suddenly a group effort became a one-woman show. At some point, I want to see the artists live. Until then, check out my top five artists to push and support: Saint, PWR BTTM, Tasha the Amazon, Trill Sammy, and Lil Rarri (formerly WhyJae).

For someone so young, he sure encapsulates the essence of early Hip-Hop as if he was 25-30 years older. (Listen to “LeFunkyIntro.”) As I listened to his 10-track project “The New Funky Dread,” I was happy to hear worldly influences and multigenre implementations. Delving into his personal life, I learned that Mohammed Sillah was born in Serekunda, Gambia. He was a teenage refugee who fled his country with what he wore and a backpack. He was not granted permanent residency in Sweden until after he released his debut single, “Chillin.” Saint is also a student majoring in music production. Is this the kind of project that I would listen to all the time? Probably not. However, I think he would be fun to see in a live performance setting.

In the past, we covered a fellow Gambian rapper named Say’hu on GrungeCake. Now we have Saint to add to that list.

Before losing Alex Ghassan in the Oakland Warehouse Fire and listening to “New Hampshire” by Brooklyn-based duo PWR BTTM, I didn’t think about where I’d like the living to bury me. If whoever is in charge of me when I’m gone—the lucky person I marry, my children, someone in my immediate family, or close friends—I would like to be buried in a place where aspiring professionals could visit me for inspiration. People would come to my burial grounds to meditate and find themselves. Maybe it would be a school or place for artists to go on sabbatical. Who knows?

However, I loved the lyrics to “Dairy Queen.” It made me feel good when they played it live for NPR Music Tiny Desk Concert.

There are a lot of women into the arts. A countless number of women make rap music, but not all of them pique my interest. A sucker for a good beat and a decent flow, Tasha the Amazon is one of the newest artists to stun jaded music journalists. Riding instrumentals like her male counterparts, the Downtown Toronto-native rapper is one to keep tabs on because of her roll-out consistency, upcoming shows, and the companies and institutions that are cosigning her budding career.

As trill as you think he is, Houston’s 19-year-old upstart makes music influenced by local dance records. I’ve been told “Hip-Hop is a young man’s game,” and the sentiment remains with Trill Sammy. For someone who started putting music out in 2015, he’s accumulated millions of plays. Recently, the artist (cosigned by Kirko Bangs and Slim Thug) worked with Maxo Kream on “Rich Shit.” Trill Sammy’s line on “Hot Like Houston,” a remake of Lil Yachty’s “Minnesota,” about riding down Westheimer Road with a bad bitch in some designer (clothing) brought back happy memories. I love Houston too much.

It is important to know (before you get any weird or wild ideas) that you cannot finesse a hustler. The artist, Lil Rarri, formerly known as WhyJae, said the following on “New 30.” When the Houston rapper isn’t working on music, he’s worried about his family. According to Billboard, Lil Rarri has opened up for fellow artists like Dom Kennedy, Tory Lanez, A$AP Ferg and Joey Bada$$.

What did you think of my Post-SXSW list? If you have a city or region that you’d like for us to consider, leave the name of the area and the artists below in the comments section.