They can’t stop his shine.

Today, Laycon, the great Nigeria-based rapper making waves worldwide and charting on Billboard, released his second album. ‘Shall We Begin’ opens with a prayer in Yoruba, a sweet addition I’ve heard on African projects in the past. I think it is the perfect prelude to the next track, ‘God Body’, which finds the artist acknowledging God and likening himself to the Almighty with the opening line like “Listen good, this is God talking” and “I’m on the throne with the white beard”. Its production is big and winsome. Laycon’s difference in vocal pitch reminds me of the signature characters that Kendrick Lamar and Nicki Minaj are best known for when tapping into Kungfu Kenny and Roman. The next song, ‘Verified’ with Davido’s protégé Mayorkun enters the sizzling hot Afrobeats sound currently pumping out of Lagos and beyond.

Keeping the theme of love and the infectious Afrobeats sound, ‘All Over Me’ embodies the essence of wanting to give your whole body and soul to a partner. The Billboard-charting single ‘Wagwan’ follows, continuing the uptempo production style. In this song, we experience a more braggadocious Laycon within the lyrics and onomatopoeia—or the part where he kisses his teeth. Bringing the vibes to a slower BPM, the Joeboy-featured ‘Kele’ doesn’t lose the bragging, but this time it is on behalf of his lady. He describes a fine, hardworking woman who doesn’t seem to mind spending a little doe on herself. Everything about his lady is “pass yours”, in case you’re wondering.

‘Jeje’, featuring Terri, remains in the smooth and romantic space, as the record before it. Kicking it up a notch, the “sexual enthusiast” Laycon gets explicit on ‘Bam Bam’, painting the picture of what happens behind closed doors with the accomplished artist. I guess that’s the next order of business when your woman is hot and accomplished (‘Jeje’).

Fellow Nigerian artist Teni joins him on ‘Want You Back’, which is about relationships and the issues most people face with their partners. He wears his lack of trust on his chest, she tries to explain what she was up to when they weren’t together, and he still doesn’t believe her. It is an exciting perspective, as most times, we listen to songs about men cheating and being dishonest in their relationships. As we come to the end of the project, his featured track with YKB ‘Fall for Me’ makes even more sense when it is in the context of a full tracklisting. He’s over love, and he warns that you should not fall for him—after going through what he goes through with his love interest in the previous song (‘Want You Back’).

‘My Lane’ reenters the God-like mentality from the start of the album on ‘God Body’, but it details his rise to fame as a musician. It hasn’t been easy for Laycon, but he didn’t allow naysayers in his life to stop the “bush boy who can rap” from accelerating. His album, this album I’m writing about right now, is currently trending at #1 in Nigeria.

And last but not least, ‘And So They Spoke’ brings the album to an end with singing in American-English or Yoruba. The lyrics are about being worthy of a promise from God, stating that when a thousand forms against you, a thousand should fall. I think the overall messaging of the album is strong, allows us to get to know Laycon more, and share in his faith in God.

Listen to the well-made twelve-track Hip-Hop/Afrobeats album below. Each musical genre organically falls and mesh where they may and best fit. 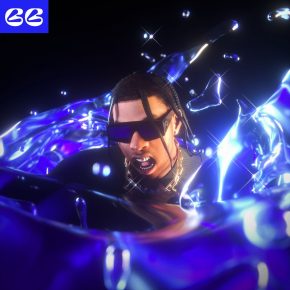