Billboard announced Billboard MusicCon, a first-of-its-kind event that will celebrate the past year in music while setting the tone for what artists, trends, and songs will dominate the music landscape in the year to come. Leading up to the Billboard Music Awards (BBMAs), Billboard MusicCon will take place Friday, May 13 thru Saturday, May 14 at Las Vegas’ newest immersive entertainment venue, AREA15. The two-day event will expand the legacy and cultural footprint of the bespoke awards show, featuring engaging conversations, consumer-facing experiences, and unforgettable headlining performances.

We are so thrilled to be back in person for the first c in two years, said Julian Holguin, President of Billboard. “We couldn’t think of a better time to launch Billboard MusicCon, two robust days of world-class programming with one-of-kind access to artists, creators, and industry leaders discussing and celebrating the ever-evolving music industry. We felt the timing was right and these discussions are the perfect note to kick off such a special weekend in music.

Billboard MusicCon will host thought leaders, artists, and executives for a series of intimate conversations on the evolving music scene that continues to shift across genres and cultures. Confirmed panels and participants include: “Women on the Rise – Management 101” with top industry managers Dina Sahim (Swedish House Mafia, French Montana), Alex DePersia (Pharrell Williams, Gracie Abrams), and Nelly Ortiz (DJ Khaled); “Don’t F*ck with Ukraine!” with Ukrainian artist Max Barskih; “The Explosion of Afro-Fusion” with Burna Boy; “The Future of Hip-Hop” with Latto; “The Future of Reggaeton” with Rauw Alejandro; and “A Decade of Touring” with Machine Gun Kelly; additional panels, participants, and performers to be announced soon.

Presenting sponsor Smirnoff will kick things off with a one-of-a-kind experience, featuring the new Smirnoff Neon Lemonades Seltzer and Ice Variety Packs, where MusicCon attendees can sip on all the bold new flavours. These are not your average lemonades, so get ready to take in the excitement we’ve all been craving. 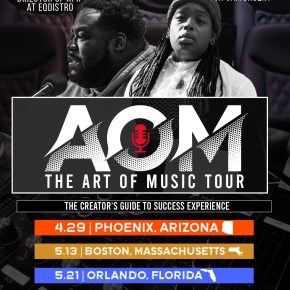