A Hiero Day to remember. 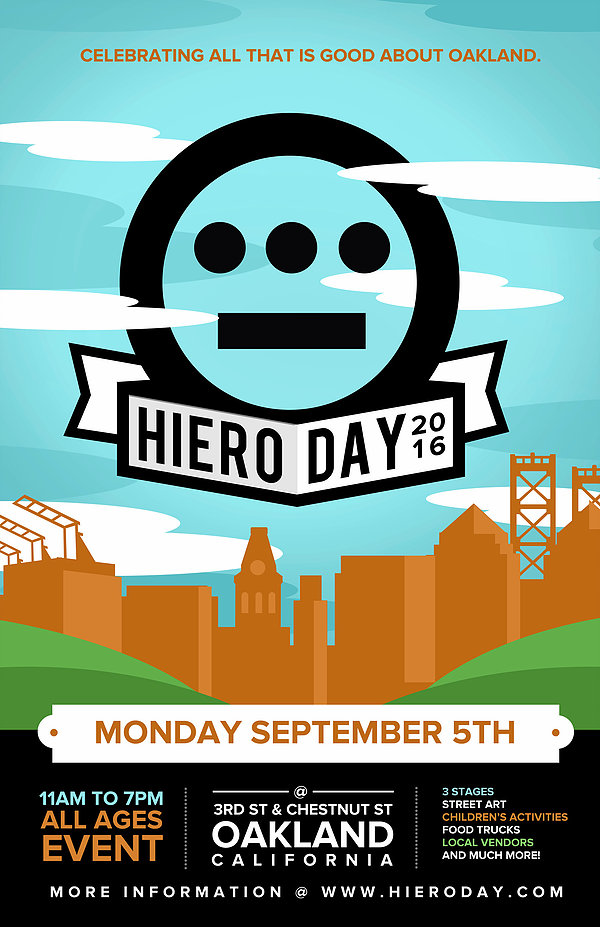 I must say the ticket pricing isn’t bad either. General admission is less than $20. Pit passes are $50 and “gives you general admission as well as preferred viewing for all stages”. VIP Access will cost you 70 cents less than $200. For $199.30 you can enter the festival at the VIP entrance, have access to VIP only areas with cash bars and restrooms. You will also indulge in the Artist Meet & Greet and have access to the front stage pit where photographers usually stand to take pictures of performing talents.

The all-day festival is kid-friendly. There is a designated area with bounce houses. Face painting is also on site. It is encouraged to take the BART to Hiero Day because there is limited parking. Local vendors, street art, and food trucks will be on the premises. If you’re in Oakland, you can purchase tickets at Beastmode in Downtown Oakland. Beastmode’s address is 811 Broadway. If not, buy your tickets online via this link.

We’ve included links to projects (or songs) by our top five artists on the Hiero Day 2016 lineup. Download or stream the music and share what you’ve heard with a friend. That’s how fans are born.

It has been awhile since I’ve seen, listened to, or shared anything about Blu & Exile. The same goes for Sahtyre, whom you will read about in a blurb beneath Rocky Rivera’s. Nonetheless, the Lord knows that I love musicians from Los Angeles. Since 2007 the pair has released two albums — “Below the Heavens” and “Give Me My Flowers While I Can Still Smell Them” — which featured the budding talents of singers Miguel [Jontel] and Aloe Blacc. In 2009, we interviewed Blu in Los Angeles. Watch the early interview via this link, and stream some new music by Blu and friends.

Perhaps, twice or three times now, in New York, I’ve watched G.L.A.M (newly known as “Colbie”) perform live. Twice for a show, GrungeCake was involved in — a CMJ 2015 showcase with !llmind and an event with Cheeba Cruz that was underattended but great on the talent booking end — and once for the first all-female festival in the City of New York. Skilled and feminine with a tomboyish edge, Sway protégé tends to visit her sources of inspiration during her live performances by sharing reworks of popular songs from the early 00s.

When she’s onstage, Hi-Tek and Talib Kweli’s hit record “The Blast” gets a remake, where the twenty-something producer-rapper speeds up the instrumentals and lays down fast-paced lyrics.

G.L.A.M stands for “Good Lyrics and Music,” and her parents (Nic Nac is her mother) are also rappers. Need I say more?

San Franciscan recording artist Larry June is one of the smoothest, pristine talented individuals on the block that is the music industry. He comes from a musical upbringing. His mother was a singer. His father owned an independent record label.

It was through Atlanta’s it boy OG Maco, his frequent collaborator and high school friend, that I learned about Larry June’s music. Less than a month ago, he released “Orange Season,” a 6-track project featuring G-Eazy, Chuck Inglish, and Zacari. Before that, in 2015, he released a total of 7 mixtapes; subsequently, taking him on the road to perform as a headlining artist. According to his biography, Larry June is a rapping nutritionist. The young entertainer gives ripe oranges to fans at his shows, but only if they deserve them.

Bay Area-native rapper Rocky Rivera, a journalist who decided to take the high road of becoming a rapper, is one of the names mentioned with Hopie [Spitshard] since the early 10s. To date, she has released several mixtapes and earned coverage from reputable websites like 2DBZ, Refinery29, VIBE and more. Opening for Macklemore and Dead Prez are no easy feat, so we’re looking forward to hearing about her set at Hiero Day. In the meantime, hear “Pussy Kills” below, my top pick from the GRLGNG members’ catalogue.

Back, during my bi-coastal adventures, I met Sahtyre, the Swim Team member. At the time, he was on the underground battle rap circuit in Los Angeles, California. “GrungeCake Buzz” was a thing and I’d write about him frequently. For as long as I’ve known him, he’s on a mainstage or performing to a small intimate, kneaded crowd of people. Known for his signature raspy voice (similar to that of Nipsey Hussle’s), weed smoking, comedic and satirical lyrical punches, Sahtyre is one of those down-to-earth stars with an immense talent that he has to release into the atmosphere and share with the world. Stream the infectious track “Mona Lisa” featuring Derek Pope & Xavier. The hook is beautiful.