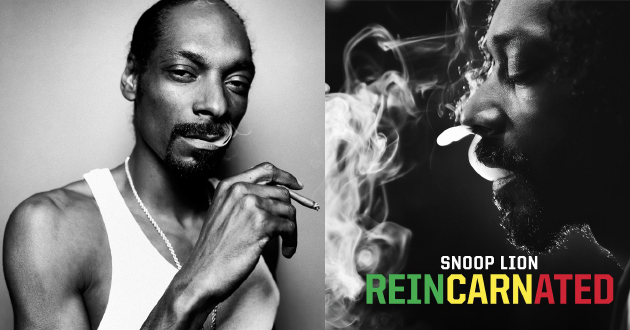 During the Summer of 2012, Snoop Dogg introduced a new stage name “Snoop Lion” that left his new fans and loyal supporters perplexed. Months later, a film documentary produced by Vice materialized and made an effort to fill in the blanks. Unfortunately, aside from Vice’s attempt to present a personal perspective or a closer look into his mind and why he might have made such a transformation, noticeably, not many followed suit. In fact, no one has really touched it with a 10-foot pole and here’s why.

As a genuine fan of Snoop Dogg and a loyal consumer and avid listener of Reggae / Dancehall music, I have to admit I was downright confused about his name change / alter ego / mid-life crisis that manifested itself as Snoop Lion. Amidst all of the alleged rumors of a Rastafari-beatdown in Jamaica, I didn’t have much else to go on. It turns out, Snoop Lion wasn’t just in Jamaica “faking” it, he was “making” a life changing album. Initially, I was uninterested and nervous to listen to it and that was mostly because we haven’t heard much about the album since its initial release. Then, I thought: Sometimes when artists venture outside of their genre, it’s not always a disaster. I.e.: Take Nas and Damian Marley’s collaboration Distant Relatives released in 2010. However, their album was exceptional and they still didn’t get any mainstream love. While Snoop’s venture into Reggae is much less of an eye-opening experience for the masses, it is clearly a display of personal growth for the artist. He had to do it. From an artists’ perspective, it’s just the space he was in. When you are in that space, naturally you have to bring forth the product of those experiences.

*Shall we mention that the video above has only successfully garnered 285K views? This is Snoop Dogg for crying out loud.

Here’s What I Liked

I am happy that Snoop collaborated with popular Reggae artists like Movado, Popcaan, Mr. Vegas, Collie Buddz and many more. He also had features with Busta Rhymes, Akon, Chris Brown, Rita Ora, and Miley Cyrus on this album. Objectively, the album Reincarnated is not a complete disaster, even with his alter ego “Snoop Lion” at play. The best tracks are definitely the ones where the true Reggae legends represented for him and he did what he knows best: Rap. When he let the Reggae artists lace the tracks with authentic Jamaican Patois, it worked well. Also, Snoop’s vibe and flow stayed consistent to his style of laid back rapping and occasional harmonizing despite the genre fusion / change. Songs like “Lighter’s Up” and “Smoke the Weed” are hits, and the other tracks where he did more singing like “Here Comes the King”, “Rebel Way” are good as well. “So Long”, “Get away”, “Tired of Running”, “Torn Apart” and “Ashtrays and Heartbreaks” are just okay.

Songs like “Harder Times” where Snoop used a wannabe Jamaican accent was definitely among the worst of the track listing. “The Good Good” left you feeling bad, and while we think his daughter Cori B. is adorable “No Guns Allowed” made us want to die. Sorry Snoop, sorry Drake. It is what it is. “Fruit Juice” quite frankly pissed me off because Snoop’s fake accent killed what could have been a hit with a traditional Reggae riddim. He should have let Mr. Vegas hold that hook and keep it, as well as, anything else that required any kind of accent. Faking an accent is never cool, unless you are an actor, and sometimes even that can be an epic fail. It’s better that you don’t do it. People who originate from the islands know when it’s fake and they are usually either offended or you end up being a laughingstock. If Snoop Lion plans to do a follow-up to this album —when in Jamaica— go hard or go home! Collaborations with artists that embody and personify the sound you are looking to achieve is a must. Also, if you bring them in, allow their input and you should trust that they know what sounds good when it comes to Reggae music. Let them help you arrange the track listing according to the tempo and please allow them to sing the authentic hooks, and do what you do best: Rap. Harmonizing is good, just lose the accent. We love Drake, Miley Cyrus, and everyone else but because they were all out of their element, they didn’t bring their “A” game. Stay true to form, and don’t try to fit a square peg into a circle space.

Why It’s Not That Bad