Superstar Nigerian recording artist Yemi Alade teamed up with African music legend Angélique Kidjo for ‘Shekere’. Off the heels of winning her first GRAMMY Award for ‘Best World Music Album’, the Beninese singer-songwriter and the ‘Johnny’ singer released a visual to celebrate Kenyan culture, which happens to be a coincidence as the beloved President Daniel arap Moi just died. It wasn’t until I watched the 1994 film, ‘The Air Up There’, starring Kevin Bacon, Charles Gitonga Maina, and Yolanda Vazquez that I became enamoured with Kenyan culture. From the beautiful outfits and jewellery showed, to the tribal and choreographed dancing, it may pique the interest of the traveller in you. I wouldn’t be surprised if you booked a trip to ‘NBO’ (Jomo Kenyatta International Airport) today.

We watched the ‘Shekere’ video when it was at 831,542 views some days ago. Now, it is at 1,143,084 views. The Ovie Etseyatse-direction is from her ‘Woman of Steel’ album out now on Effyzzie Music Group. 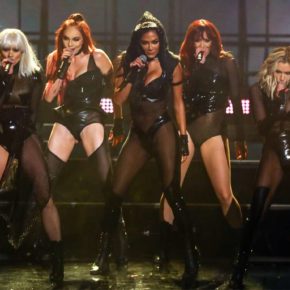