What Happened At The Excision Show - GRUNGECAKE

Eager as ever to cover the Excision show at the Best Buy Theatre in Times Square last Saturday, we prepared ourselves for a night to remember.

From previewing to promoting the show, we were pumped as you could only imagine. After finding a parking space a few blocks away from the venue, we joined this fast-paced line just to get on another line (will call). Mentioning that you were a part of press for the event did not matter much. We get it, but not really. (See clip of us joining the line below)

(We would have filmed more but…)

In short, (when at will call) we learned that we were not on the press list. After being asked to step off of the line, we stood near the entrance in the cold for approximately twenty minutes. We waited for

Finally, we called his publicist and soon we understood the source of the issue. He forgot to put us on the list. Great. He thoroughly apologized for his mistake — in fact, it was endless. Unfortunately, since that show was sold out, we could not be admitted.

During the phone call, we were asked to come back for the Sunday show. We agreed.

One little problem: Sunday’s show was canceled — on Sunday — and I did not receive an email or phone call about it. I found out it was canceled on the way to the canceled show. Something told me to just look on their website. After seeing what you see below, I was irate! 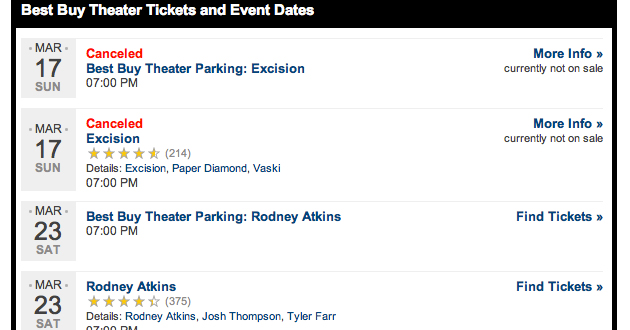 I felt like I was being Punk’d! In any case, he was sincerely apologetic again.

This article is not intended to drag anyone through the mud, but it is to tell the truth and to let fans know we are sincerely sorry about our lack of coverage. We were cooperative and we totally intended on attending. There wasn’t much we could do. We are huge fans and we were looking forward to the experience.