Mya Harrison slides right through record industry history pre-Beyoncé, post-Aaliyah. With relatable lyrics and a personable look, Mya was like the big cousin that made you a little cooler, a little more aware; she made an indelible mark to last your dating lifetime. 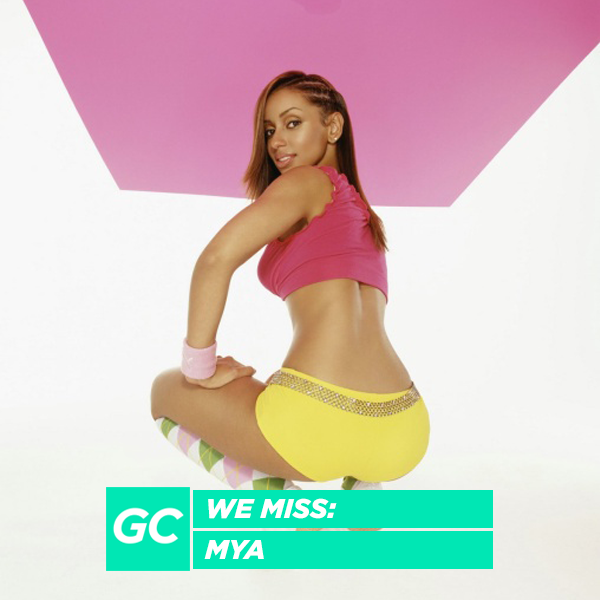 “Whose draws are these?”

Mya came through and busted my 6th grade wide open:

“Baby, hell no! That’s not the way it goes. It’s all about me tonight.”

She straddled that beat. There was no Soundcloud or MySpace. Videos really ruled the last century because it was how you met an artist. Having heard “It’s All About Me” featuring Sisqo on the radio first, I thought she was older. An unleashed dragon and Mya in a red mandarin dress gave me retro chills. Who knew she was only 18? Record industry [is] shady [and] needs to be taken over for real. Her subject matter felt more genuine than Brandy and Monica. It gave her an edge that they avoided.

She created her own lane and “Best of Me” paved it. The Swizz Beat’s produced single hit the block hard. It was blaring out of cars, in bodegas, and was on every mainstream channel. The contrast of her sultriness and Jadakiss’s raspiness conveyed the sexual tension within the track. As big as the song became, it was dwarfed by the remix. Trackmasters produced and beckoned Hov to drop the legendary verse. It’s indubitably the top 3 remixes of that era. The video is a time capsule of bejeweled bandanas, baggy jeans and jersey dresses. It is Summer-personified. DJs still depend on this to get the people going.

Tricky Stewart’s horns and keys adorned “Case of The Ex.” She gave us a title for what we didn’t realize was a common problem. It’s the the point of reference for any girl within that situation. Don’t talk to me about R&B if you can’t grab a broom and start pole the routine. After the success of “Fear of Flying,” Mya was everywhere and became award show royalty, winning a GRAMMY, a VMA and a plethora of others. Known to be a triple threat, she was casted in musical films like Chicago and Havana Nights.

Don’t sleep! Mya is getting that yen. She released two solo albums exclusively in Japan. Earlier this year, Mya teased us with Love Elevation Suite off of her own imprint Planet 9. Mya, stop playing. We miss you.