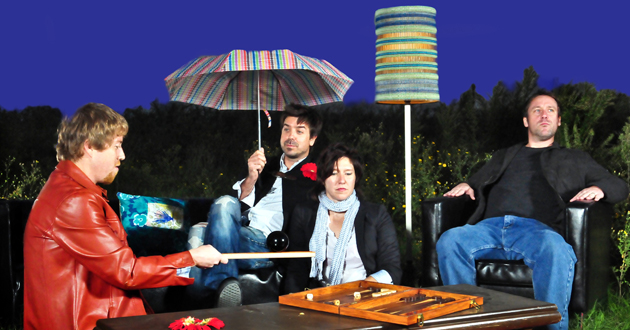 Austin-based band Boy + Kite rustled up a bit of a bang around town upon the release of its debut album “Go Fly” in 2011. The record lodged itself in the charts of the city’s NPR affiliate, and Boy + Kite was picked to tour as opener for favorite sons of Fort Worth, The Toadies. Family life soon called, inflicting constant delays on the production of the video for the band’s popular song “Think In Stereo,” but eventually kids get born and so do paint fight filled films. The “Think In Stereo” video, directed and produced by Daniel Gibbs of Yard Turkey (Coldplay, Dixie Chicks, Blues Traveler, Ben Kweller) is worth the wait.

“This video was absolutely a riot to make,” says guitarist and co-lead vocalist Darvin Jones. “Daniel was such a pleasure to work with, and brave enough to get very messy and with very expensive film equipment! We all gave up some clothes, shoes, and almost our eyesight that day.”

The clip is also a reminder of this band’s pop power as it celebrates its upcoming official South By Southwest showcase with the release of an EP of new songs. Titled “We Can Go Anywhere We Want,” the new Boy + Kite EP was recorded by Nada Surf keyboardist Louie Lino and is scheduled for release on March 19th, four days after the band’s official South By Southwest showcase at The Parish Underground at 8:25 PM. Stay tuned for the first single from the new EP coming soon.