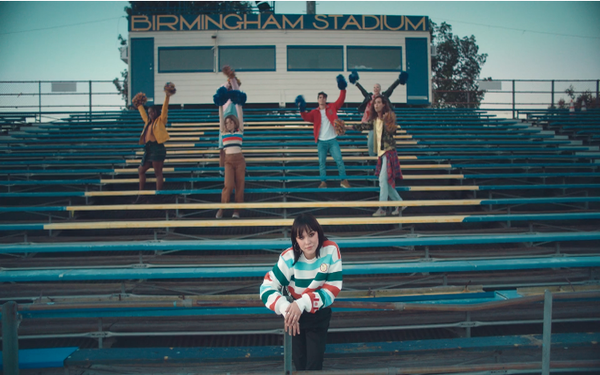 I miss MTV’s programming from the 90s just as much as Kanye West shares his frustration about it, publicly. At the time, the station withheld an apt high standard for music videos, curation was its best, and it’s the stuff we grew up watching. As a result, we have a soft heart for certain things, an ear for what makes a song great, and an eye for creative perfection. I don’t do this all the time, but whenever I do come across anything that reminds me of those times, I can’t help but wonder. UPSAHL, the name of a nineteen-year-old singer that makes me think of UPS and U-HAUL at first glance. Earlier in the month, she announced her signing to the recently relaunched Arista Records. In tandem with the news, she released the official audio of a song called, ‘The Other Team’.

Cleverly written with a term used frequently in the generation before mine, the record is about a boy who seems too good to be true. Or even worse, being into someone you can’t have. And boy, I have had one too many experiences of my own, but I’m alive!

Classically-trained on piano, guitar, and choir every day, UPSAHL graduated from a performing arts school in Phoenix, Arizona. The idea for the song came to her at the end of a month-long writing trip.

“‘The Other Team’ is about unrequited feelings and crushing on people that don’t like you back, so we figured that a high school setting was the perfect place to showcase the feeling that we all know too well. Everyone is always going to be swinging for somebody else’s ‘other team,’ so you’ll be seeing a bunch of missed connections between characters throughout the video, while we all dance and run around a high school. It definitely has some ‘Breakfast Club’ vibes, so it really takes you back to high school and the whirlwind of emotions that go with it; even though I was just in high school, it still felt like a little throwback.”

Now, the official video directed by Ally Pankiw, whose directed for Janelle Monaé and Ariane Grande, is out now. Watch the nostalgic video below.

Be on the lookout for UPSAHL. She will support Max Frost on tour; SXSW is on the schedule. Her self-titled EP will be out in 2019.