The Spanish kid from the East got Grace (Spice’s first name) to bless the Grace Jones original. Fun fact: Both Grace’s were born in Saint Catherine Parish, Jamaica.

UFO FEV, one of the first New York City-native artists to leap from grinding through email pitches to mainstages all over the globe, returns with a potent feature from one of Jamaica’s baddest deejays, Spice. The flawlessly produced ‘Nightclubs’, inspired by Grace Jones’ classic ‘Nightclubbin’ sees the Harlem emcee with the high-grade descriptive lyrics, which plants its listener in the seat or room of his mind. If you weren’t born in the 70s, but you were rocking with Hip-Hop music when Puffy dated J Lo, you know the flip of this beat for Shyne’s debut album was a problem.

The year was 2000: the beginning of a new millennium and a new decade. The Barrington Levy-sampled single was a breath of fresh air. Music fans treated him like he was the second coming of Biggie because of his big baritone voice. ‘Nightclubs’ is a sweet ode to those times, and the classic ‘Nightclubbin’ by Grace Jones from her fifth studio album. Play this one loud, baby. 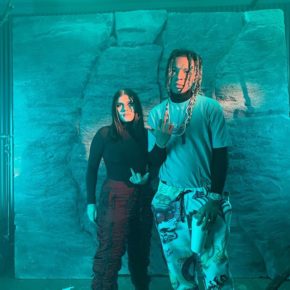