On Valentine’s Day afternoon, South Central-native rapper TF—an abbreviated version of ‘Team Force’—and I got on a call to talk about his debut album, his musical influences and his thoughts on the music today.

If you’re unfamiliar with the recording artist, no fret. After reading our interview, you will have a better sense of who the West Coast artist is. If you’ve been following the career of ScHoolboy Q, it’s a good chance you’ve seen him or heard his voice. He has the third verse on ‘Tookie Knows II’. Shortly after that feature, TF released a song titled, ‘September 7th’. ScHoolboy Q, Danny Brown, G Perico and Traffic make cameos in the black-and-white music video.

As far as ‘ErThangSkanless’ is concerned, the composition and production decisions make sense. TFs musical influences are intact. Based on what the consensus is when it comes to West Coast Rap, then and now, his production choices are traditionally East Coast. I think it is unique. ‘Residential’ picks up the tempo of the album—swinging the sound back to his turf.

“I got a song dedicated to my mom on there, yo. That shit gets a little deep.”

I asked TF if he planned to release a music video for the track. He wasn’t sure, but I think he should at least consider it for a split video. Next, we talked about the importance of keeping everything in-house. When I asked who worked on the video, as far as direction, he said:

“We all come together as a team on the video. We try to keep everything in-house. It’s going to be the same type of party every time.” 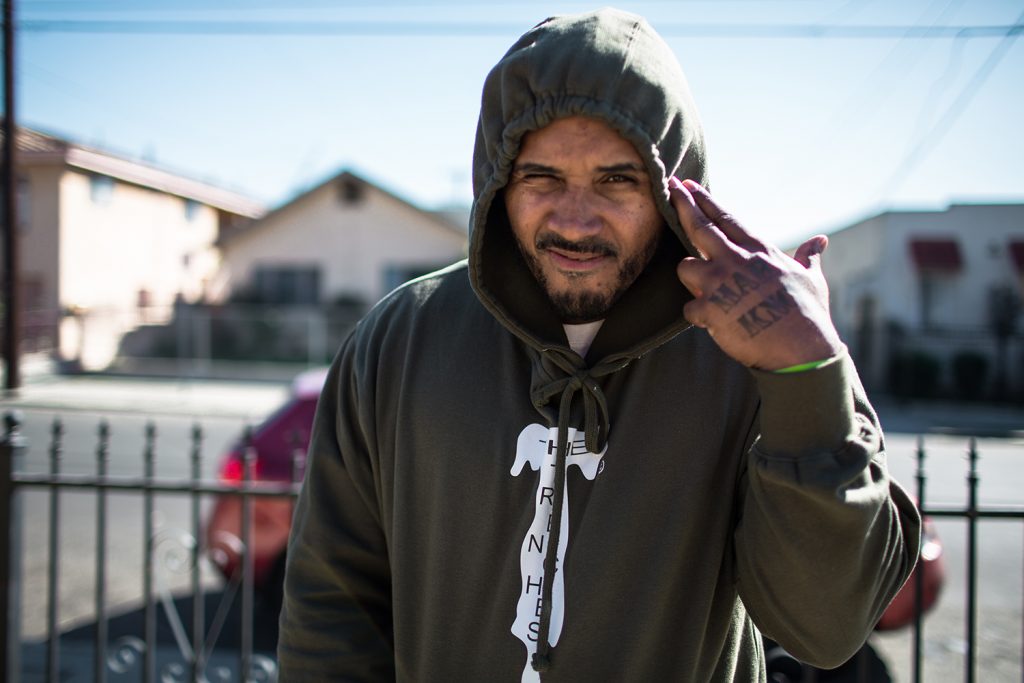 He couldn’t disclose much about his unreleased track with Anderson Paak, but he did reveal how they met. Paak was in the studio with Q—as in ScHoolboy Q—one day. They were listening to “Unprofessional Shit” of the No Hooks. According to TF, after Paak heard the song from his “No Hooks” project, Paak told Q to tell TF he wanted him “in the booth”.

I asked him more questions, specific to his style of music.

LA Gangsta Rap has been prominent for a long time—most especially in the 90s—who are some of the guys or girls that inspired you to make Rap music?

“I mean, I wasn’t’ really inspired by Gangster Rap. It’s just my environment. It’s just the environment. On top of the culture with the music, it goes hand in hand. So, everybody got a story to tell, so I’m going to put mine together like this. So, that’s how that came.”

If not influenced by Gangster Rap, what are some of the things you would listen to? Or songs that you like to listen to in your spare time?

“Right now? Or just coming up?”

Well, we can do both. Let’s do coming up, first. Then, let’s take it to ‘right now’ so we can see if there are any differences.

“Shit, coming up I listened to everything. I’ll listen to Westside Connection. Then, turn around and listen to Mobb Deep. You feel me? So, I was always trying to be on both sides of the shit. Especially, like, living out here and seeing what’s going on, and listening to music that’s from the whole other side of the world. It’s relatable, but it’s different. You know the sounds are different. The beat selections are different. Like, everything is the total opposite.”

Lately, what have you been into?

“Lately, it’s the same shit. I try to listen to everything. You know, it’s a little less variety for me because a lot of this shit just be trash. Motherfuckers [are] doing their thang, but it’s like, everybody sounds the same.”

I love the honesty. I appreciate it.

I usually have these conversations a lot with other music journalist friends. I wonder if it is because we’re getting older, so what we like is what we like—and we don’t really want to bend on what’s new and what’s trending. Do you think it’s like that for you? Or do you just think—I guess what I’m asking you is—admist what’s happening now and what’s trendy, are there any songs that you like? Without it being trash? Do you think the entire sound or movement is trash? Or is it a select few?

What does TF stand for?

Which neighbourhood in Los Angeles are you from?

What was that like? How do you think it has moulded you to be who you are now? Because you’re funny as hell.

“We had to grow up at a young age, just based on the shit that was going around. We always tried to keep laughing and try not to let the shit around us—because it’s easy to get broke[n] out here. You either going to be scared or it’s going to break you or it’s going to make you. I just tried to be humble with all of the shit that I’ve been through and all of the shit I done seen, and not take for granted where I’m at and what I done been through. It could have been worse than it was. Some situations worked out for the best. Even the bad situations, they played out. You know, it worked out. So, I just try to stay humble throughout all [of] that.”

What is your favourite record from your debut album—if you can pick one—or is that not a fair question?

“Well, like I said, it’s a true story, so it’s pieces, yo. Once you hear it, you’ll see what I’m talking about. It goes through the shit that was going on at the time. If I had to pick one, it would be the one about my mom.”

On February 23, TF released ErThangSkanless. It is based on a true story. He also released a video for ‘Residential’. Check it out below.