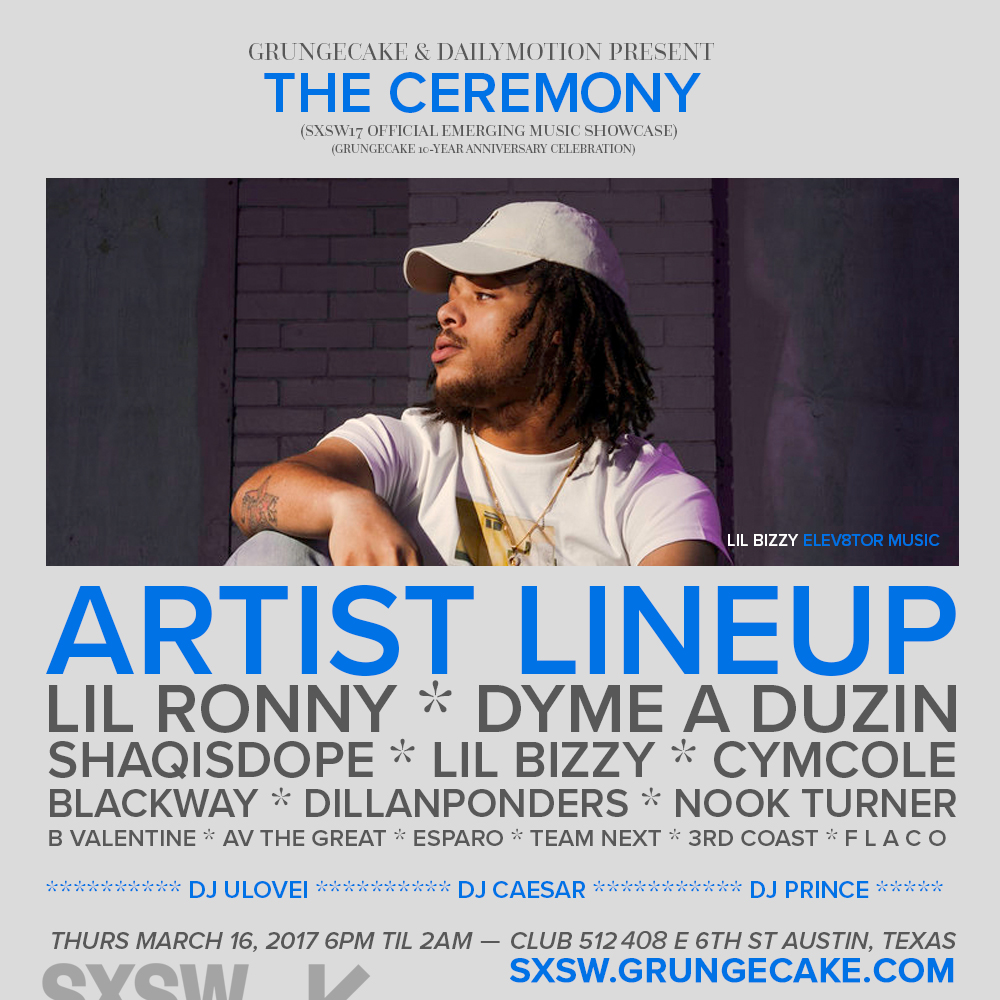 As what comes to us all as a surprise, GrungeCake celebrates its tenth year anniversary with its first official music showcase at SXSW17. In February of 2007, the company launched its print magazine in the Greenwich Village area of Manhattan at Bar 13. Since its founder and editor, Richardine Bartee has enjoyed a lifestyle earned by the groundwork she has laid with her extensive media background. These days, she is writing her first book and handling publicity for celebrities, musicians, and a carousel of professionals. Notably, she has helped to launch the music careers of Marquise Jackson (50 Cent’s eldest son) and Lil Bizzy (Bizzy Bones’ son) during the first quarter of the year.

‘The Ceremony’ is not only a way to celebrate ten years in business but to continue to support new artists (at all levels) and to push quality talent on a mainstage where music lovers from all over the world come together in the name of discovering what’s next.

Our partner, Dailymotion, will live stream the music showcase on its website on the day of the event. Dailymotion is one of the world’s biggest video platforms in the world, offering a mix of content from users, independent creators and premium partners. (GRUNGECAKE is a premium partner.)

If you’ve been a fan, some of the names on the artist lineup are familiar. After you read the short blurbs on some of the artists we’ve supported in the past, search around the website. We usually know when people are going to be famous or popular before they do. (No, we’re serious.)

*If you are a new fan (or a fan of the artists listed), welcome to GRUNGECAKE. Buy a t-shirt, a hat, or another article of clothing. We can’t wait to ship it to you.

If there are artists that you would like to be on our website or considered for live performance opportunities in the future, let us know. We must warn you. We’re not nice, but we are also not rude. We’re honest. If you or your friends can take honesty (or professional critique), email us.

Good luck and see you at SXSW.

Pauliiito & Ceehaze are an energetic rap duo based in San Antonio, TX. Last SXSW, they met Murda Beatz and made a project. “My Side” from the joint project is out now.

Installed as the next princess of R&B-Pop on the scene, CymcoLé’s soft yet edgy lyrics make you want to know more about the Ohio-native singer and dancer. Before she went on tour with Max Bassy, she released the official video for “Bombs Away.”

Modern Day Hippie: Glorified for what he puts in his body and not (always) for what comes out of it, DillanPonders has been on our radar since 2014. Watch Shroom Daddy’s video for MANDEM; See him at the showcase.

Before Tuesday night, six million people weren’t aware of Lil Bizzy. Music is in his DNA, so he can’t run away from what he sounds like, but it’s OK. The people don’t seem to mind. Watch his debut video. Then, hear his debut EP.

Mr Throw-That-Ass-In-A-Circle is best known for his upbeat, danceable anthems. Lil Ronny (Motha F) is bound to make you break a sweat in the Texas heat. Get to know the Dallas-native entertainer.

Easily one of the smoothest recording artists from the Toronto area, ShaqIsDope is slated to become one of the city’s next mainstream artists. Pusha T gave him a nod. It’s only a matter of time…

Add GRUNGECAKE’s first SXSW music showcase to your schedule at www.sxsw.com/schedule. Learn more about Dailymotion via this link.