Aussie singer-songwriter SAYGRACE is worth the search: Watch the visual for ‘Violent Crimes’ – GRUNGECAKE  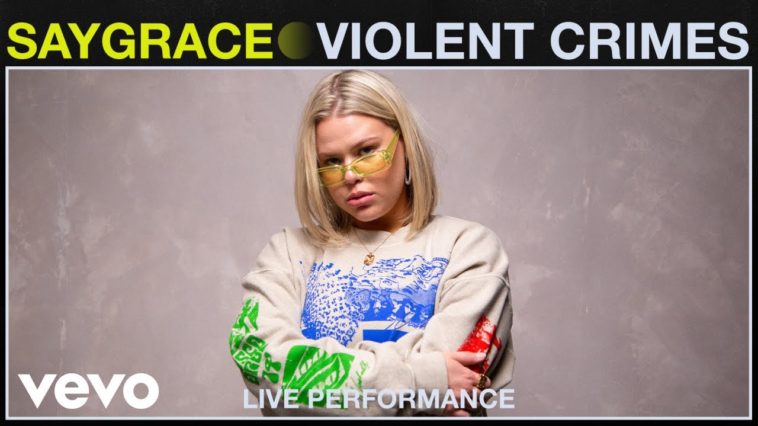 I came into my listening session, not knowing what to expect, and then, I got a little nervous when the thumbnail loaded. I had no idea what direction this performance or video was going with a song titled ‘Violent Crimes’. At first glance, I was pretty excited that the video was a live performance. Let me admit that SAYGRACE is an artist I am just getting acquainted with. What drew me in was when I saw in that thumbnail was that beautiful guitar. After my initial listen, I decided to let the next video play on YouTube, and I was not upset.

I am intrigued by this girl’s vibe. To be very honest, her music feels nostalgic, and her collaborations with other young girls remind you of the early 2000s. That decade, when the girls were actually singing. SAYGRACE, and a few of her associated features, take you back to the styles of Mandy Moore, Jojo, Joss Stone, and Lily Allen. During her live performance, SAYGRACE’s cover of Kanye West’s song from his album titled ‘Ye’, which debuted in 2018, was actually good. When I checked her other videos, I really enjoy the youthfulness of her videos.

She has undergone a rebrand from Grace to SAYGRACE. I am interested in seeing what Miss SAYGRACE does in the future. She is apparently the same Grace who covers ‘You Don’t Own Me’, initially sung by Lesley Gore, and it features G-Eazy.

Last week, I received the YouTube link to SAYGRACE’s music video for ‘Violent Crimes’. I thought it was just another song title—meant to be an attention-grabber. I was utterly taken aback.