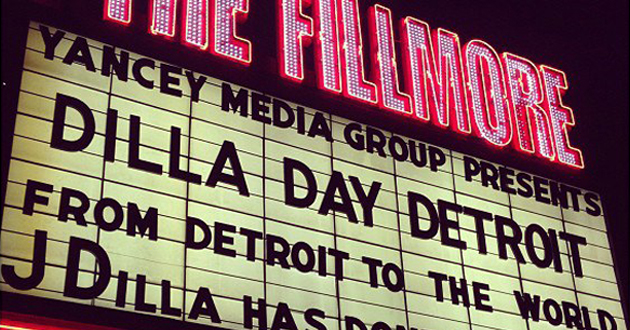 Aside from just waiting in the line prior to the night’s festivities, I found myself roaming the lobby at Dilla Day Detroit and kicking it with the many local organic Detroit street brands whom had set up merchandise posts throughout the front of the venue. After picking through multiple tables of Dilla-dedicated-gold, I found myself back in line anxious to get a grasp on what was already rattling though the walls of The Fillmore Auditorium. Within minutes, it was time. So, I grabbed an ice cold lemonade flavored Vitaminwater from their own post and made my way to the stage. Along my walk towards the floor, I was stopped cold, dead in my tracks, when DJ Sicari played Dilla’s “Won’t Do” and got things cooking when he ordered all B-boys and B-girls to report to the stage pronto to break. I shouldn’t have to tell you what happened next, yes, much self explanatory.

The night was well underway and the audience hype, when the first performers rang. By 8:45PM, the group Clear Soul Forces were already a song in and the energy was bouncing off the walls. I kept reiterating to myself that these fellas have a special sound that will never age.

As their set concluded we were greeted by the nights’ hosts. The legendary Grap Luva and Yo-Yo appeared and introduced J-Rocc. Rocc spun for a couple joints which lead into Frank n Dank crashing the stage mics in hand with “Shut Shit Down” and other joints like “Let’s Go” and “Ma Dukes”, the place erupted with joy.

At this point, my Vitaminwater was on ‘E’, so I cruised back to grab another. Upon my return, Grap and Yo Yo were sharing stories of highlights and their memories of Dilla. The night was just getting warm and who better then little bro Illa J could’ve body slammed they’re set like Illa J. Illa J ripped song after song, Illa then dimmed the lights and had a one on one with Ma Dukes who he had been corresponding with from stage to balcony in which she was standing and had yet to sit the whole tribute. Illa, then, sat behind the keys and lit an intimate fire with the audience “Keep On (Slow It Down)” was the smooth hook, he then grabbed the mic and spit a potent verse to match. (Meanwhile, HouseShoes is creeping through the crowd being nothing more than a fan) A little bit into his set, he broke the Yancey Boys newest anthem “The Throwaway” and Frank Nitt tip toed back on stage and positively crushed his verse. Dilla chants soon rang throughout the scene that I believe; shook the “D”.

After Illa J’s set, Yo Yo took to the stage to bring up the next performer. She had a tough time going down the list of milestones that the next talent upheld. Detroit’s Hip Hop Ambassador HouseShoes. He quickly delivered Madlib produced “The Healing” by Erykah Badu. That quickly led into Luther Grams “To The Other Man” sample which is used on GFK “Fishscale” album.

HouseShoes at this point has The Fillmore on its side shaking. It was pure pandemonium as HouseShoes woke the spirit of James Yancey. I believe that this was my favorite set from the night. HouseShoes didn’t stop there “Baby” then vibrated through the monitors.

After HouseShoes, the multi-talented Miguel Atwood-Ferguson Quintet showcased what it truly meant to be talented. Live instrumentation of classic Jay Dee material.

I kept asking myself, who’s able to play a violin for an hour straight? Miguel Atwood-Ferguson, that’s who.

It was getting late, and I could see some folks getting restless, Grap and Yo Yo had a surprise for us. They brought out Ma Dukes and Big Proof’s mother to share words of inspiration. I recall Ma Dukes saying that “we got this” when talking about the Detroit Hip-Hop scene.

They’re speeches were well-endured and we were geared and ready for Royce da 5’9” and Talib Kweli.

Approximately, 10 minutes passed and Royce was on stage. Royce did what Royce does. Brought us back to ’99 with the DJ Premier laced “Boom” and more. I think a lot of people were upset with his set time of 15 minutes and Kid Vishis’ 5-minute accapella. But life went on and so did the Dilla tribute event and to the stage next needed no introduction. First, a band of musicians walked out and set the tone. People were jamming and at about 1:30am, Kweli ran out on stage and ran down his list of classic joints stemming from work with Dilla, Yasiin Bey (formerly Mos Def) and Kanye West. Before heading off, he gave tribute to the late Baatin (1/3 of the group Slum Village).

Overall, [it was] a phenomenal night of artistry, homage, and light given as well as payed to the mogul; James Dewitt Yancey, Dilla Dawg, Mcnasty, and to most of the world J Dilla.