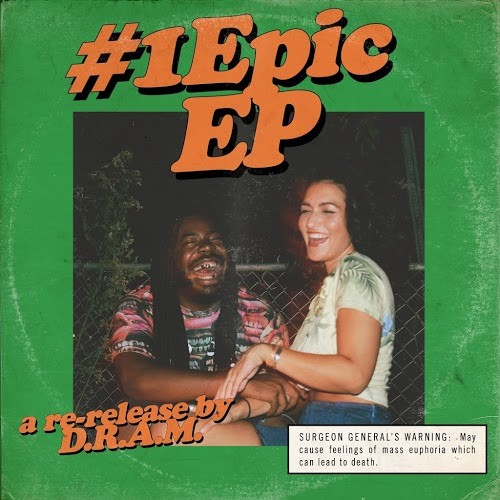 Has there ever been a moment in your life where it felt like everyone was ranting and raving about something new, but you just couldn’t for the life of you understand why? That’s exactly how I feel about the music from new artist, D.R.A.M. The Virginia Beach native first started gaining traction last summer when he released his song, “Cha Cha” which went viral. To be quite honest, I just started hearing about this mini-phenom of a song. Color me late because this artist has garnered the attention of Chance the Rapper, World’s Fair, and even music industry legend, Rick Rubin.

On the heels of dropping the visuals for his viral hit, the Does.Real.Ass.Music artist released his EP, #1EpicEP March 2. The EP features collaborations from such artists as Mass and Sunny & Gabe with production assistance from Gable Niles. No, I have never heard of these names before either, but I’m always down to learn about new artists. To build on that remark, D.R.A.M definitely utilized #1EpicEP as a platform for explorations and experimentation to delve into his craft. The artist goes from giving off this lucid Afroman feel on several tracks throughout the EP to jumping in a time machine on “Erything” saying, “Fuck you, I’m bringing Motown back”, then slinks into the power ballad-sounding track “$”. I do have to say, the finished product does sound a bit jumpy, but since he’s a new artist, I guess D.R.A.M. has that leverage because no ones truly knows what his sound is like yet.

Oddly enough, there isn’t much feedback coming in on the #1EpicEP. Could this possibly be because people don’t know how to digest this piece of work? This EP is so all over the place that you have to wait for it to catch you with a lyric, a beat, or musical composition. You’ll probably want to cut the EP off right before this happens, but when it happened for me on “$”, it was worth it. When the artist sings,

“What the fuck is my purpose…My mama mad I ain’t workin’, I feel worthless/But when I’m on stage I am workin’, I ain’t perfect”,

I feel a connection to D.R.A.M. in that he illustrates the struggle cycle most creatives go through: doubting their craft and fighting the urge to lead a regular life to gain stability, but then feeling validated once again through their craft signaling that they’re on the right path. Wait a minute, do I pick up a subtle “Untitled (How Does It Feel)” sample on “Gotta Go”? I feel my subconscious trying to contribute background vocals to the track to whisper in the missing D’Angelo lyrics. This project may be haphazard and I do not advise anyone to sit straight through it, but ironically like the bible, it’s not meant to be consumed from start to finish.

When it comes to #1EpicEP and D.R.A.M. as an artist overall, I can say I value the mad scientist and his experimentation of an EP. I can’t say D.R.A.M. has won over a new fan in me, but I can say he gained an appreciator. He might grow on me down the line. “Cha Cha” never will, though. Nevertheless, my ears will stay open to hear how this artist grows musically.