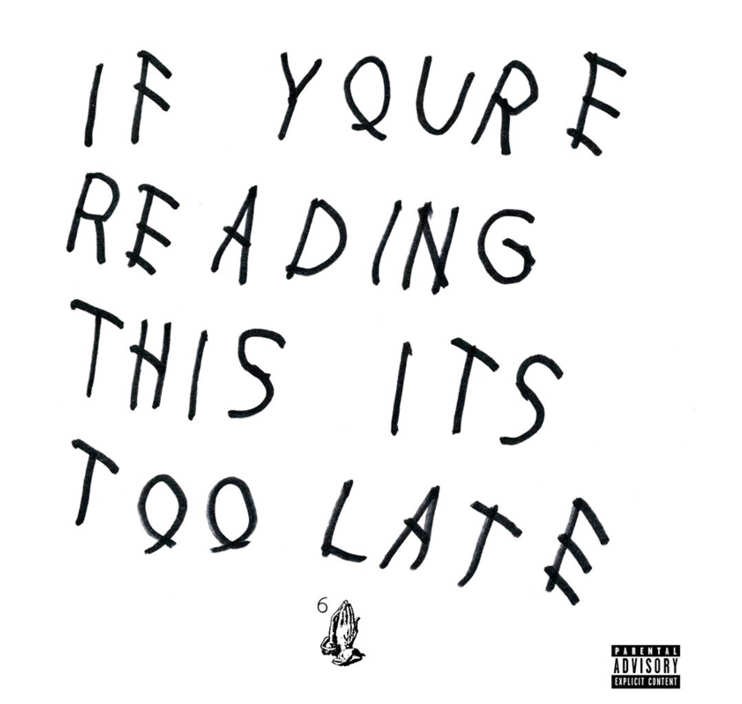 Drake has executed the last 6 days with perfection and I am gonna tell you how: First, Drake releases a “Started From The Bottom” type short film titled “Jungle” directed by Karim Huu Do, and moisten the mouths of critics in hopes of a soon to be mixtape — or something. Second, Drake opened up for Nas at the Sprite’s Obey Your Thirst concert at Irving Plaza and brought out surprise guests like Kanye West, Travi$ Scott, OB OBrien and iLoveMakonnen. Third, Drake Beyoncéd all of us by dropping a “mixtape” out the clear blue sky like — Boom, “If You’re Reading This, It’s Too Late.” Fourth, precipitated individuals with a social media timeline to disperse photos of the album cover on the telling the world about the new music from Drake. Fifth, getting those same individuals to saying: Fuck it, I’ll drop $12.99 on iTunes. Sixth, getting everybody to discuss it and choreograph unique new routines with a hula hoop.

IYRTITL is an awesome approach of another Drake release. I won’t say that it’s his best but with quotable lyrics to text or tweet to everyone from your mother to your ex, you won’t be disappointed. Taking you back to the top of the new millennium, Drake softly samples Ginuwine and Timberland’s 2000 classic “So Anxious” in the opening track, “Legend.” On one of my personal favorite tracks “Energy,” Drake reminds us of the ‘enemies’ that he has, as well as give more than a mustard seed of faith to all of those girls who dance on poles. “I got strippers in my life but they virgins to me.”

“Know Yourself” is a really deep song with a few hidden messages that are deeply patched into the cleverly crafted hook. Although, lyrics to “Know Yourself” are in well-written emo-form Drake vibe, this song has a lot of impacts, as Drake reflects on the past time he spends with his friends, flashy spending habits and mentions of time spent with ex-lovers. The dope hook pairs well with Boi-1da, Vinylz, and SykSense’s production.

Speaking of producers, according to MTV News, Instagram helped Wundagurl, an 18-year-old producer get her beats on IYRTITL and helped to create “Used To” featuring Lil Wayne and “Company” featuring Travi$ Scott. In “Used To,” Drake and Lil Wayne both get a few things off their chests ’bout how stardom has changed their lives. Drake also brings up Kendrick Lamar, “They gon’ say your name on them airwaves, they gon’ hit you up right after like, it’s only rap.” In “Company,” Drake gives quote-worthy options to the girls with Ex Files “You ain’t got the juice like that.”

The arrangement on IYRTITL is a little scatter plot so I would suggest that you shuffle through to get its full range. It’s no secret that Drake is not afraid of showing his vulnerable side. In “Star67,” Drake reveals financial issues he’s been experiencing at label Cash Money Records, “Walk up in my label like, where the check though?” and in “You & The 6,” Drake bares it all by showing a deep conversation between himself and his mother’s concern about his single life. “She said, “I heard you back with you know who”’ and I said “Girl, I am always back with you know who.”

I can honestly say that I am a huge fan Drake’s recent work, “If You’re Reading This, It’s Too Late.” It may be due to the fact that I have been intrigued by Drake since Hazel dumped Jimmy after he was shot and forced to sit in a wheelchair. Or it could be that IYRTITL is a solid listen. Either way, I know what I’ll be listening to while practicing tricks with my hula hoop.