Listen here. There’s not a thing QUIÑ can do that I won’t be intrigued by or willing to give the time of day. If the reasons are not obvious, allow me to list them.

Her look and stare are crippling if you aren’t strong.

Her voice is also as beautiful as a love scene between an unlikely couple that some parts of the world would call an abomination.

Her hair is consistent, whenever you see her.

Just by listening to the lyrics she sings, you can tell she’s deeper than what’s on the surface.

Above all, QUIÑ is going places, whether you like it (now), later, or not. 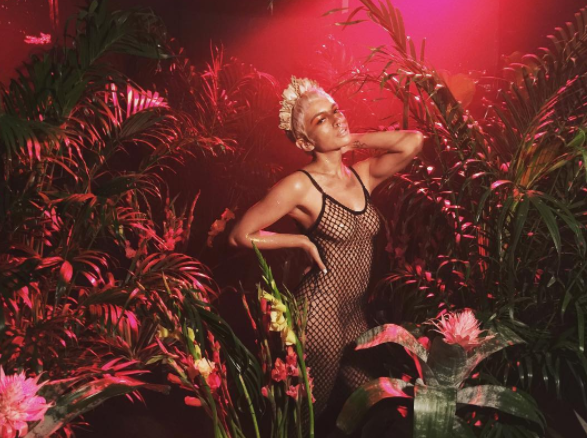 Gaze into your screens and watch the woman as she melts your minds, hearts, and souls. ‘Math’ is a new video directed by Calmatic. Calmatic has directed music videos for fellow Los Angeles artists like The Internet (‘Special Affair/Curse’, she has a cameo,) and Kendrick Lamar. Call it zodiac reasoning or an excuse to hear certain sounds the way that I do, but ‘Math’ is Scorpion. It is sensual, love making music that takes you away when you press play. Any Scorpio, with sense and ears, would tell you that they can see, feel and hear the passion that QUIÑ brings to the table. Somehow, she evokes a response from your entire body. Most people, let alone entertainers, aren’t able to achieve such response.

The song is from QUIÑ’s audibly delectable EP called, ‘GALACTICA’. Accordingly, the extended play released in 2016. QUIÑ will perform live at SXSW this year. If you’re going to be in Austin, Texas in March, follow her so you can get information on the show times and the show dates.