Follow Pierce Fulton as he travels with his fish, Bo. 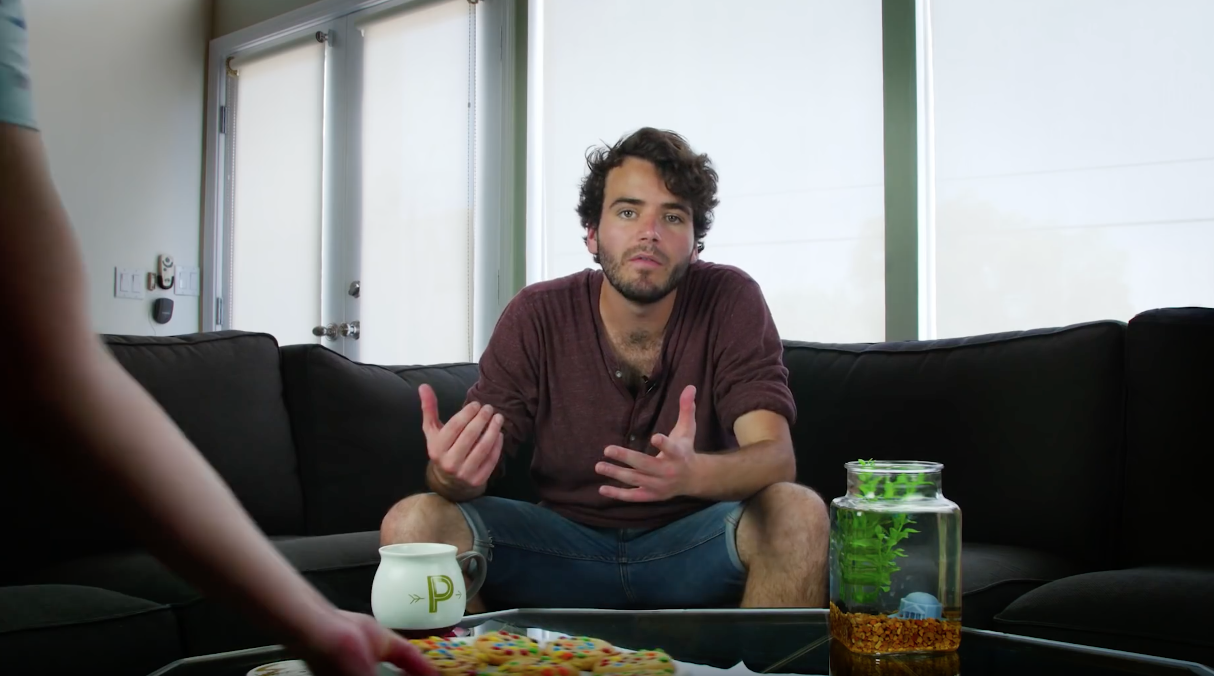 Quirky? Check. Bizarre? Check. Pierce Fulton, a young Los Angeles-based singer-songwriter, released a two-part music video for ‘Borrowed Lives’ from an EP that features original songwriting and vocals. Truthfully speaking, Mr Fulton is high as hell in this video. I don’t want to spoil the experience for you but as you watch the second part, you’ll see him do some questionable things. Watch the entertainer travel from Los Angeles to British Columbia, Canada.

In 1998, cold winds frosted the windows of a small, isolated town in Vermont, and in one particular home, 6-year-old Pierce Fulton sat on a tiny guitar amp, a similarly tiny guitar in hand, and begged his parents and family friends for song requests. None of them could have known he would grow to become an auspicious musician with nearly one million streams on Spotify — but they probably had an inkling. The prodigious youth had a penchant for quickly learning instruments, and soon he could play the drums, piano, trombone, and more, in addition to his guitar. His fascination with taking a concept from one instrument or genre and applying it to something new would later define the core of his music

As he grew older, a formal education in music cemented his immense talents. He properly learned music theory and electronic music production, establishing an understanding for production programs, basic synthesis/sound design, and sampling. Having grown up in such a small town, discovering the rich legacy of electronic music artists from Kraftwerk to Apex Twin was a revelation. Soon, he had his first real breakthrough at age 18: his debut EP, the 3 track Pardon My French, which turned heads through its unconventional sounds.

Pierce Fulton continues to grow and experiment as an artist. His breakout singles include ‘Where We Were’, ‘Runaway’, ‘Kuaga’, and many others. Combined with official remixes for artists ranging from The Killers to Above & Beyond, Pierce has enjoyed promising positions on the charts: #1 twice on Hype Machine, #15 on Billboard Emerging Artists, and #41 on USA Spotify Viral 50. His single ‘Borrowed Lives’ played on Roundhouse Radio in the UK, FluxFM in Germany, KALX, WCLH, WIXQ and more.

I’ve played some sort of music since I was a child, says Pierce. Anywhere from a guitar to just banging sticks on stage as a 5-year-old at my aunt’s wedding, I’ve always ‘done’ something. Electronic music was the first time in my musical lifetime that I stopped playing things and started clicking and dragging. It’s a blast because you can be a one-man band, but over time I realized I lost a lot of what made me a musician. I still can’t even play my guitar as well as I did when I was 14, don’t even get me started about drums or piano. With my songs like Landmines and No More, you can hear the live music sneaking its way back into my life but Borrowed Lives is my first full step back into being a musician again.

Now 24-years-old and based in Los Angeles, Pierce is still subject to the habits of his youth; bouncing between genres and instruments while simultaneously bringing all of these influences into the dance music he’s known for. When he isn’t out on the road, playing shows around the world, not too much has changed about those quiet, cosy nights spent in the studio.