Paper Diamond gears up for a busy New Year as he adds new dates on the 2014 Cold Crush Tour, including the Avalon Hollywood on January 17th and New York City’s Webster Hall on Feburary 7th. Later this month, he’ll be dropping a mix for “Diplo and Friends” on BBC Radio 1 Sunday, January 26th. Tune in to hear exclusive tracks from friends like Zed’s Dead, Two Fresh, Antiserum, Colta, along with some of his unreleased productions. Alex will also be making his debut Las Vegas residency for eight months at the Wynn following with plans to take his unpredictable antics overseas after The Cold Crush Tour‘s North American dates. 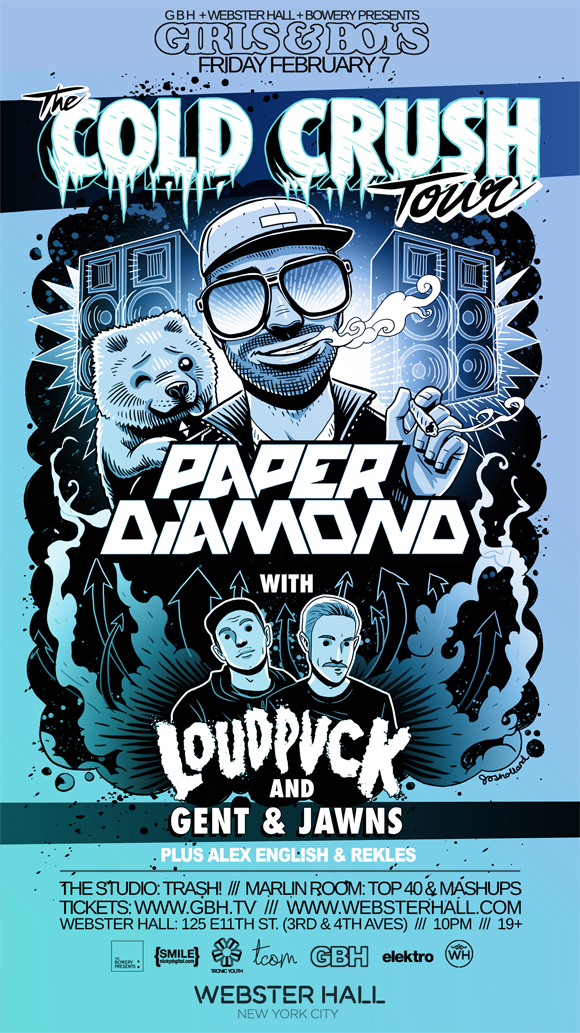 On this tour, Paper Diamond will be experimenting with new gear by incorporating creative beatmaking with an acclaimed sound library on Maschine Studio into his live stage productions. During 2014, fans can expect to hear a plethora of new tunes, some featuring never-before-heard collaborations during his recent LA studio sessions with various writers, producers and singers. On his March LP release Paragon, Paper Diamond featured a wide array of talent including the adored pop indie singer Angela McCluskey, the widely embraced production duo Christian Rich, plus Cherub, Buku, Gavin Turke, J Fresh, and Protohype. His fans will certainly have a lot of new material to discover.

The dynamics of Paper Diamond’s live performance makes every show a unqiue experience. Alex explains how he improvises each set live every night to give his fans a truly unique experience.

[quote]I’m using my iPad on stage to control two computers, one has Ableton to play the music, which then sends a MIDI signal to the second computer, where I can control all of the LEDs and live visuals on stage that will capture the nonstop energy of my set. So basically, I get to represent myself in not just a musical manner, but I get to provide an overall visual experience for my fans as well.[/quote]

Supporting artists playing on tour such as LoudPvck, Branchez, Gent & Jawns, and Manic Focus, were all hand picked by Alex who takes note that they each share a similar philosophy.

[quote]We all love the same things, we like to play great music and have a great time, and I wanted to bring along good music from artists that I personally enjoy and respect.[/quote]

Bursting onto the trap scene in 2012, the Los Angeles based duo, LoudPvak consists of DJ producers Kenny Beats and Ryan Marks, who have been blowing up with their big room bassy style and remixes from the likes of Kill the Noise, AutoErotique and Nervo. Paper Diamond says of LoudPvak‘s style, “The tricks they do with production really intrigues me.”

You can always hear a choice cut from Gent & Jawns‘ during Paper Diamond’s sets, who have become an unstoppable force in the world of club music. The release of their now classic Moombahton anthem “Vibrate” landed them remixes for Datsik, Bare, and Muffler, as well as collaborations with Nadastrom, Torro Torro and JWLS. Playing on the tour’s first leg, is Buzzworthy New York native producer Branchez, who recently bonded with Alex during Zeds Dead Altered States tour and has his own fresh take on blending jazz, slow burning rap beats and synths that oozes soulful timbre. Manic Focus also joins the crew with his energized electro hip-hop filled with deep bass lines and melodious grooves. Stay tuned for more artists and dates to be announced on The Cold Crush Tour.