Read feature
Song Premiere: Nocando’s “All Over A Bitch” - GRUNGECAKE

Oh, the many things you’ll do… all over a brawd.

Just seven days ago, we shared the soon-to-be viral video which candidly documented the recording of the song we have the glory of premiering today.

Best known as a battle rapper with a “chip on his shoulder” who emerged on the Los Angeles Hip-Hop scene in the early 2000s. Currently, he’s the host of weekly music event Low End Theory and the founder of his own record label, Hellfyre Club. Low End Theory occurs every Wednesday at The Airliner located at 2419 N Broadway.

Admittedly, we figured that our female audiences might want to argue or dispute his consistent use of the “B” word and in his defense, we feel it is suitably illustrated here. We have women on our staff and we have played the song for different types of women and what they’ve expressed is their love for his mettlesome delivery. Nocando’s All Over A Bitch is deeper than repetitively repeating a four-word phrase, it is actually the amalgamation of life experiences that moulds human males from a boyhood to a manhood. Stream the song via this link or the player below.

When asked what inspired him to write All Over A Bitch the artist communicated that he was going through something personal in 2007-2009 and if he recorded a song that discussed what happened at that time, “it would have sounded like Eminem trying to kill Kim”. As far as influence of style goes, he cites the “old grime freestyles” donned by British rap artists like Wiley and Tinie Tempah.

They’d end each verse with saying something like “bad man” over the course of 48 bars,” he reflected.

People, especially men going through divorces and in the middle of ending relationships all over the country, can relate to what’s being said in Nocando’s song. We’re fans regardless, but we enjoy All Over A Bitch’s honesty and the mindsets it will challenge in the near future. We are looking forward to his next single from his free album “Tits & Explosions” set to release on May 14th via Hellfyre Club. 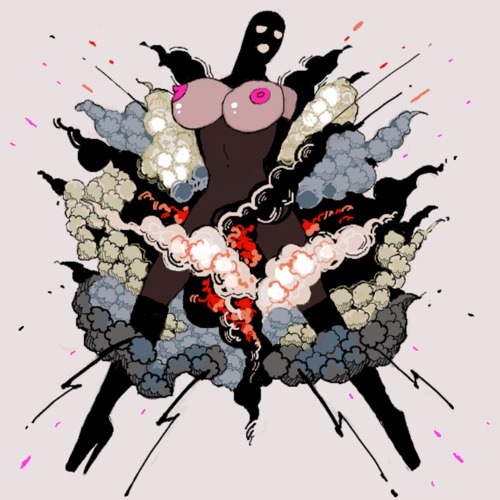 Whilst you wait, pick up Nocando’s debum album Jimmy The Lock on iTunes. Click here to order.