Read feature
Music is good when you can understand It: Nas at 92Y with Anthony DeCurtis - GRUNGECAKE 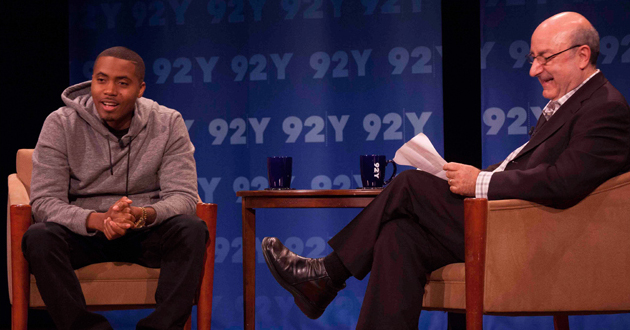 Last night, Nas talked to Rolling Stone’s Anthony DeCurtis and we hung onto every word he said and didn’t say. In songs like ‘Bye Baby’, a song about leaving his wife, he shares raw emotions and complicated feelings and as DeCurtis said, “it almost doesn’t sound like a song. It sounds like you’re talking to a friend.”

The same diction and procedure applies to the rest of his catalogue.

From talks about his daughter being in the next room when he recorded the two-time GRAMMY-nominated Daughters”,’ comparisons to Rakim, taking his wife’s dress on stage at Radio City Musical Hall a week ago and how to wow fans of Hip-Hop today, Nas reaffirmed our thoughts at GrungeCake.

On his process and “Daughters”

“Once I wrote the first word. It flowed. I just wouldn’t stop. I was happy with the record, but I didn’t want to put it out. My daughter was in the studio and she said ‘What did you say?’ Everyone started laughing and she walked out.”

Nas was unsure about using ‘Daughters’. It wasn’t until he saw a girl that he knew crying and exclaiming that “This is just like my life.” When he realized that it was not just about his experiences and that other people (so close) can relate that’s when he knew he was onto something.

DeCurtis and Nas continued to talk about what the song is about.

Later, he mentioned that she garners over 350,000 views from a single statement via social media.

On “Illmatic” and what he was setting out to do

You have one chance to have your one chance. I had to make sure it was right. He mentioned that when he started, the rap game (or a rap career) spanned up to 4 years. He didn’t want to leave any stones unturned. He needed to tell the whole story. Knowing that and having that plan, he knew “New York State of Mind” was going to be the first song on his album. I think we can all agree that it was a perfect introduction. It still feels new, every time I hear it. Timeless and classic.

Relationship of Music and Words:

“If the track speaks to me, then, I will speak to it. I will hear a track that I like and just write something to it. That song winds up being the song that makes it to the album… I gotta lot of criticism for not having the best beats.”

The crowd laughed and so did I. It was funny to me, because when the discussions comes up about who’s the best emcee, his beats are always one of the things that people do not like, therefore counting out or low on the list. Hm, CNN doesn’t seem to think that matters. Honestly, it was a relief to know that he knew!

He thought it was a great compliment, but it was too soon.

“It’s great to compare to this great artist, but I had my own things to say. They (fans) wanted me to remind them of the artists they liked. I lost fans along the way because I came to do me. He didn’t know where it (his career/music) was going, but he knew it was definitely going somewhere and he was right.

He reminisced a bit about Park Jams, liking Stetsasonic, Audio Two, Run DMC. He was into big boombox records. The adults, at the time, listened to stuff that was so far back, that they could keep it. He is a funny individual.

Like many other rappers at his age, he was apart of a group called, The Devastating 7.

He recalled, “Dudes wanted to go solo and we ain’t go nowhere.”

“I was only one that was still taking it seriously.”

On what gave him the confidence

“When I started to record my first demos and putting on the cans and hearing yourself and seeing the different things you could do with your voice. I sound good. I liked the way I sound. I liked my voice. I started to like my voice. When we played it back everybody else liked it.”

On his [writing] style, cramming and rapping across the bars

“I think I just love the writing part. I loved it so much that, I would write a lot. I realized it wasn’t a verse. It was a song. When should this verse end when should the next verse start? It had to be a complete thought.

“There’s so many words right, then I have to perform it on stage.” He shakes his head.

He suffered the consequence of having so much to say. He used to have a bunch of hype men on stage that he performed with.

On bringing his wife’s dress on stage:

Luckily, I went to the Motown Museum last year, so I could understand what he was talking about.

“He had tax problems. I had tax problems. I still do. He helped me to do. I was doing what he is unfortunately can’t do. People tell me I helped them out so much with that record. Whoever was in the audience going through something similar, it was for them. I went to see my ex-wife after the show and she was like, “What are you doing?”

He’s one of a kind. I grew up where a lot of my friends’ parents were drug users. I seen them O.D. on drugs and die. Od’d on heroin. I really appreciated my parents because they were not drug users. My pops smoked weed and I don’t know what [else] he did.”

Dad listened to Fela Kuti, Count Bass, Art Blakey, Miles Davis, John Coltrane. Others in the neighborhood played disco music that he could hear outside. They played “Other young cool, young music.” and in his house “It was an African, Nigerian man singing.”

“Wolfman Jack. Just different stuff I would hear from him. I like Fela now. I get it. I didn’t get it back then. He was always on the road. He wasn’t always there. He would leave musical instruments around. I’d be backstage checking out things. I wanted to leave. I didn’t want to be around it. I appreciate that now, definitely.”

On his guardianship to Hip-Hop music

When Anthony DeCurtis asked him: How do you see things now? (State of Hip-Hop at the moment.) He took a sip from his 92Y cup and it killed me. He is a character.

“I feel like the young guys really want to make a difference. Not all of them. There’s a group of guys that really care about it.”

He went onto say that some rap acts that are from his beginnings “Gave up. [They] Don’t feel appreciated anymore. They stopped making records.”

In reference to the new guys, he noted that there’s “Lots of confusion. They want to start and be at 2Pac’s level.”

I do what I do. I can’t really take my eyes off of where I’m going.

Briefly, he addressed “Hip Hop Is Dead”, “It really showed people that I really care about Hip-Hop.”

“It’s a lot of embarrassing stuff happening right now. But we need it. It’s just entertaining. You need to have the duality. If it gets too serious, it’s not good either. You need someone to break of the monotony of the seriousness.”

Mr DeCurtis points out that Nas is too hood for Hollywood, so he’s past the point of going back to the hood and in response, he says:

“You find yourself being lost. At one point, everyone was on parole. The next moments, mansions and in Hollywood, Bel-Air. But I don’t fit in with those guys. They have characteristics that I don’t understand, so I am back with the guys on parole and I don’t understand some of that stuff either. My favorite time is when I’m not doing nothing. I don’t fit in anywhere anymore. I feel too much at home… that I feel like something bad can happen. And the other guys have models.” And as we all know, Nas loves model chocha!

Concerning pitfalls of the other world

“It all goes back to what you want out of life and what you see as success. Nas asks, ‘What is success to you?’ You can lose yourself in the riches. Too alone. You’re tired of people. You need time for yourself. You don’t really know who likes you. You need space. You want to be around people that really care about you. People who matter.

“It’s great. It’s a great thing. The Grammys are huge. It’s a great achievement and accomplishment. At this point, to still be a Grammy nom is real cool. “Daughters” has two Grammy nominations. I’m not mad.”

“Base off the next record, I’m writing the notes and I’m really excited. I’m in a zone and I love where I’m at. I love where my head’s at.”