THE MAN BEHIND MIIKE SNOW RECORDED HIS FIRST SOLO ALBUM WITH A FULL ORCHESTRA, AND DOESN’T TAKE HIMSELF THE LEAST BIT SERIOUSLY.

Words and interview by Richardine Bartee (originally published on MTV’s IGGY on June 14, 2013)

Andrew Wyatt, lead singer of Swedish indie pop band Miike Snow, has made a completely unserious orchestral pop album on his first outing as a solo artist. He hopes you’ll give it a listen, even though he hasn’t quite gotten his Twitter game together yet.

His debut effort Descender is released on his own label/collective INGRID, a project associated with the likes of Peter Bjorn and John and Lykki Li. The album handsomely strays away from today’s electronic, quantized sounds and embraces instead the warmth and depths of acoustic sounds with a 75-piece orchestra.

During our short interview, he discussed Descender, being kicked out of music school, and confirmed that Miike Snow is thankfully not breaking up. In fact, they are working on their new album now.

What made you take on a solo adventure involving an orchestra?

I was doing something that I couldn’t probably really do inside the context of Miike Snow. I guess like the whole thing with music is — you’re a little bit in control but not fully in control. Which is kind of [the] fun of it. I just started having these ideas for songs and I thought: Well, how can I do them in a way that is going to differentiate what I do from all the music being made now, that sounds the same? What could I do that maybe some kid who just graduated from college couldn’t do? I’ve been studying on my own. I’m not really trained. I went to school for about a year and a half. I never really studied music, but I mean I did. I studied for two years, maybe.

What did you study exactly?

I studied classical music for a year. Then, I studied jazz for a year at the New School and then I got kicked out. You had to go to your class, so I don’t know if that counts as studying. I didn’t study jazz. I was supposed to. What could I do that somebody else couldn’t do? I thought that that was a good way to put it and it also like gave it a sort of color that was very similar from song to song. This golden kind of color that matches the cover of the record.

What made you go with this orchestral sound, in particular, as opposed to what fans would expect?

To be honest, when I made the record, I didn’t know if it was going to be put out on a label other than our own little INGRID label or that people were going think that it was something that they wanted to try to push out there so, I don’t know if I was even thinking that. I mean, I’m sure I knew that some hardcore Miike Snow fans would follow and try to figure out or listen to whatever I was doing. But, I didn’t think there was that many of them. Also, I just felt like I wasn’t really thinking that Miike Snow fans would know about this record. I probably bet a lot of them still don’t.

Is this album for the fans or is it for you?

I mean, of course, it’s for others. In my own life, I’ve been influenced by a bunch of records that were records that sat unnoticed for quite a long time, and are now, considered classics. I’m not saying that that’s going to happen with my record but I know better than to think that just because you make a record and push it into a lot of people’s faces, it’s going to have any meaning to society. So, I decided to just put it out and just make sure there was a record, that it existed — that it was out there — that it could be found. I didn’t really worry about whether it had a big commercial explosion, the way Miike Snow did, for example. Some things just need to sit and simmer for a long time.

Like, I can give an example: Robin Gibb’s solo record (Robin’s Reign). He’s from the Bee Gees, you know? He made a solo record in like 19-I-guess-73 or ’70 even and it’s a fantastic record but for whatever reason, the machine wasn’t in place to pick it up and push it out there.

When hearing any music for the first time, I try to place it in a public space, what setting is appropriate for this music? What would a fan be doing throughout their day when listening to your album?

Now, that you’re saying it. I can picture it in SoHo in houses like Vuitton and Céline.

Yeah, like you’re doing a fitting in a private room.

“Septimus” is upbeat and I like the way you deliver the lyrics on that song. What exactly are you conveying in them?

Are there going to be any Mark Ronson remixes or any other remixes for this album?

There might be. I would say: Gosh, with the remix thing. We had so many. It’s even exhausting for me to think about remixes because there were so many Miike Snow remixes. So, I just thought: Let’s give the people a break. I wanted to spend at least a certain multiple of the amount of time making the music that I would hope people will spend listening to the music.

It’s incredible, the number of bands that we are asked to be giving our attention to and the number of projects we’re being asked to give our attention to. I don’t think [it’s] really possible to take in that much music and have one artist that you sit with and that you really kind of get to know when it starts to feel like a little bit like your family. Which was an important thing for me growing up but I think less and less that’s becoming true and I don’t have any arguments with that. That’s just sort of the way the world is going. We’re becoming like much more of this hive mentality — like we’re — Is there an MTV Hive?

Not that I want to drop trademarks in the middle of my interview but, our attention is all on this thing called the internet and there’s just a bazillion things swirling through it, you know?

Consciously, you’ve chosen to title tracks with weird phrases or words that can only be imagined as inside jokes. For instance, “In Paris They Know How To Build A Monument.” Is there any truth to my thoughts?

Yeah, I mean, that’s obviously a joke. I read one review where it’s like: The only thing that Andrew Wyatt lacks on this album is a sense of humor” and I was like: How can you title a song “In Paris They Know How To Build A Monument,” and be taking yourself really seriously? That’s retarded. So, the whole thing is a little bit of a joke and that song is a little bit of like — there’s a little bit of Graham Greene in it, where it talks about like going out to the country. It’s like imperialism, sort of. Some of the tough douchebags who created the imperialist regime of going to other cultures trying to suppress them and then, extract their natural resources and then, sell it back to them at a much higher price and try to make them feel less than, the whole time.

Some people got it.

When I heard words like “crackheads,” “benches,” and “McDonald’s,” it just made me laugh.

Yes, you just wanna laugh! So, I’m not taking myself super seriously. I think because people hear an orchestra, they associate that with some type of like pretentiousness. It’s because a lot of the people who do listen to classical music are pretentious and are afraid of taking in what’s happening today. That’s not me. I’m the guy from some weird-like band that you’d want to miss at Coachella.

Lastly, as a solo artist, especially in today’s setup, I find that you have to give more of yourself to keep up your momentum. How are you dealing with that?

Not well. I think I need to be a little bit more on it with social media. I find it exhausting actually, and I don’t find it as rewarding as some other things that I find exhausting. I look over my tweets and I think they’re good but I don’t tweet 25 times a day. A lot of people do and I just don’t think I can. Maybe I can morph into that dude that just tweets 25 times a day. I’m gonna tweet right now and we can feel really insecure about it. 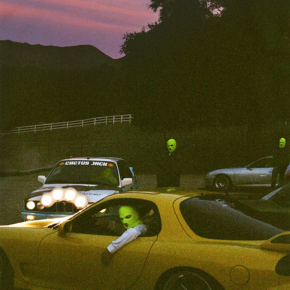