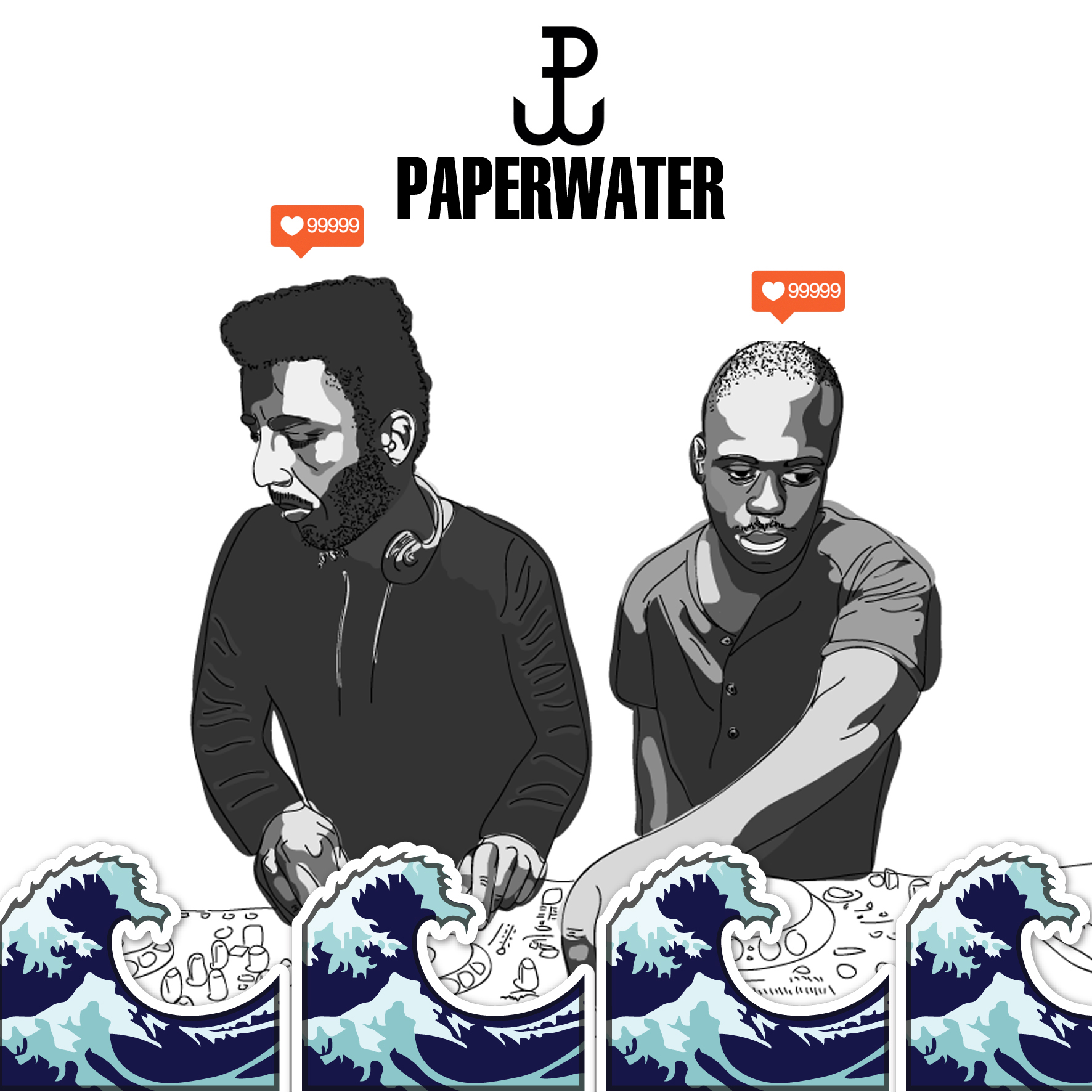 Paperwater is a fine Electronic DJ duo based in Miami, Florida with ambitions to exceed the expectations of others and most importantly, themselves. They’re funny, charismatic and honest and with those characteristics in place, the music can and will truly speak for itself. Learn a little more about the Liberian and Haitian transplants, their creative process and goals.

As a DJ duo, what are the roles for live gigs?

EAS: We kind of feel it out. We switch off depending on the groove’s each other is in. In the future, we would like to incorporate live instruments and performance arts to match some production that we are working on.

Explain the meaning of Paperwater. Tell me more about your individual backgrounds.

EAS: Paperwater was created in front of a Taco Bell. One drunken night, we were coming up with names that would be dope for a group, so we randomly started saying crazy things and one of them was Paperwater. So we were like “Thats it, Paperwater!” and it stuck. Some of our best ideas come from random nights like that. I was born in Haiti and moved to Miami when I was 2-years-old and grew up here. I was always surrounded by music and art. My mom is a painter, and she always blasts music when she’s working so I naturally like both, and connected the two as I grew up.

Daygee: Both of my parents are from Liberia, West Africa. I also grew up in Miami and would go to New Jersey every Summer for 5 years. Because my mom work for the airlines, I was able to fly all over the world. I think because of that, it heavily influenced my creativity.

Why’d you guys choose to remix songs by Mya, Nelly Furtado, and Montell Jordan? They’re bit of a throwback.

EAS: Those songs have a special place in our hearts. Growing up, those songs came on at every party and made you feel some type of way, so it was only natural to incorporate that into our music.

Daygee: The Montell Jordan track was like a personal challenge to create a modern day Electronic version without ruining the original too much. As for the Mya and Nelly Furtado tracks, I just wanted to get closer to fulfilling my teenage dream of sleeping with them. It didn’t make the impact I thought it would.

Daygee sheds a tear, in honesty.

Tell me more about your Half/Full mixes.

EAS: Half/Full is a slogan we like to use and apply to everything we do. We look at life as half full, never half-empty so those mixes are a way to express ourselves through music and just have fun with it. It’s not your typical mix that you’ll hear at your clubs down here, so it’s our chance to break the South Beach mold and kind of do us, and play what we like for people. Although, we love to turn up! We plan on featuring more DJs in future mixes, so anyone reading this that wants to just mix dope things, holla at us.

Daygee: I Love U GrungeCake xoxo

We love you too Daygee.

How did y’alls friendship start? Have you ever had to overcome a big difference in direction of a mix or remix? Creative differences?

EAS: I met Daygee in the 10th grade and hated his guts. He took my position in football. He was faster than me, but then [I] ended being cool with him because he was cool. He always wanted to work hard to get better.

Daygee: Then, we started DJing local parties in high school. I think it lasted more than 6 months. I believe whenever there’s more than one person working on something creatively, there will always be creative differences because our styles are different. The art is bringing something different to the table and creating something new with Paperwater. When it comes to production, we haven’t reached the point that we feel like we [have] found our sound so we are just going to keep creating. As for the the mixes, we never really have any differences. We just go with what we fuck with at the moment.

How has Miami shaped your sound / influences?

Daygee: It hasn’t at all. We fuck with other artists here, but not the city. It shows no love to it’s children.

EAS: This city hasn’t done anything for us, except teach us “how to move in a room full of no’s”. We do have some good people around us now like DJ Sandman who really brought us along and helped us hone our craft and taught us the do’s and don’ts of Miami.

Is original production for other artists apart of the plan?

Daygee: Original production was apart of the plan before we even started djing. Well before we started Paperwater, I was apart of AftertheSmoke and did majority of the production with Soft Glas. Eddy and I also did a bunch of production for local acts and international acts that have gotten released through Dim Mak, Complex, and various outlets. We also have a single called “Pornicopia” with Niko Javan featuring Voila Snow and it already has an animated video done by Niko. I’ll definitely send it early, before it drops, for you guys. We are also working on some dope shit with Fifi Rong. Shout out to Local Tourist.

What are you goals? Personal and for Paperwater?

Daygee: My personal and Paperwater goal is to get great management because we are now completely independent, and get almost everything ourselves. Which can take you away from actually working on music and collabing with artists. I just want to get to the point that I can focus on creating amazing shit and putting it out into the world. [I] want to do some more conceptual shows and events, instead of club gigs.

EAS: Same. I think having a good team is key. I think building that through management and people that actually care for your work, is what you really need.

I saw a photo on Instagram of you guys having a session in an art gallery, what did that setting do for you?

Daygee: If I could work in that space everyday I would. It was a spur of the moment thing and we asked the owner of Macaya Gallery to work in there for the day. If it was possible, I would rather work on music in a museum instead of a studio because I would be surrounded by so much inspiration.

EAS: It definitely puts you in a place like a studio could never do. It’s almost as if you’re really painting on an empty canvas.