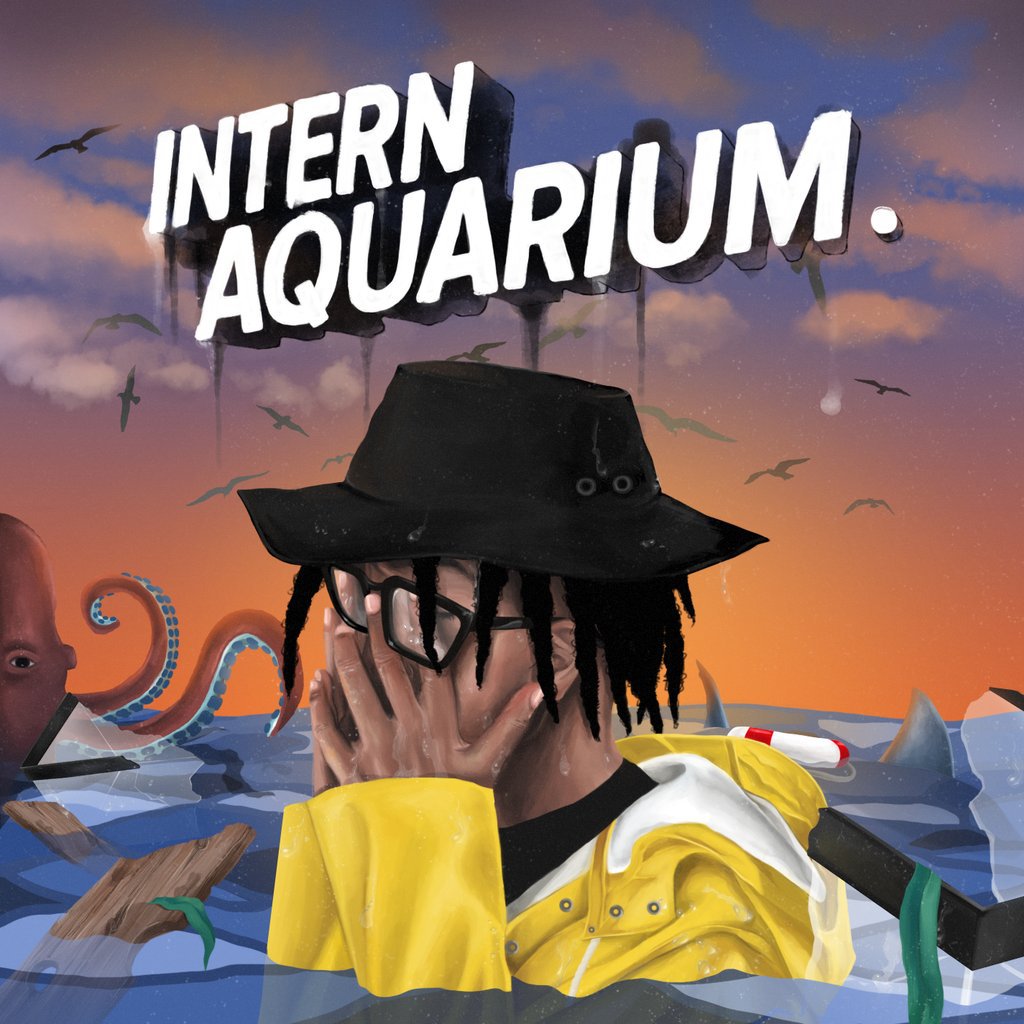 Last month, we were invited to attend Khary’s listening party for “Intern Aquarium” at The FADER in Manhattan. We arrived early, heading straight there from a meeting in the East Village with a good friend. We called the guy who asked us to come, but he wasn’t there nor was he able to answer his phone. He was at work, elsewhere. Don’t you just hate when that happens? When a friend invites you to something, and they aren’t there to facilitate? (Hey, Matos. You’re a good guy.)

In a matter of moments, Khary’s manager Andrew came into the waiting area and opened up the conference room. Picking the side of the room where I used to sit, more than ten years ago, we waited for the artist to arrive. Inaudible, garbled music played as fans and friends sipped on complimentary beers. In walks Khary minutes after 8, making his rounds, thanking us all individually for coming out. Approximately, fifteen minutes later, he started to tell his story.

If my memory serves me right, Khary is from Providence, Rhode Island. He lived there as a child until he had the opportunity to work in New York City at Cornerstone, the parent company of FADER Magazine. Before then, his mother had financial problems, resulting in eviction. Taking the opportunity to move out of Rhode Island was a no-brainer, so he did. Eventually, he found a place to live and now, he is pursuing his dream to be a full-time musician. He enlists various producers for and calls on standup comedian and friend Jermaine Fowler (SHOWTIME’s “Give’Em Hell Kid”) to bring his stories together with the power of humor and words.

“Intern Aquarium,” the unique name for his latest release is a 16-track release that sums up what it’s like to work for someone else, and dealing with the belittlement that often comes with being an intern. At the start of the project, on the “Internlude” featuring Jermaine Fowler, he says that he will never intern again possibly because they are “Never praised for their good work.”

“Intern Aquarium” is deeper than an outstanding, unpaid experience. Anyone who listens to it will learn about Khary’s personal beliefs, how he feels about the female species, drinking spirits to free himself of his insecurities on “60,” and more. He also shares his unpopular thoughts on religion and God, and his relationship with his mother on “60.” Like most underprivileged children in the United States, he remembers a time when his parents weren’t able to afford high-priced sneakers.

For the purists who will eventually make their way to my website and read this review, yes, his flow isn’t unique, but he is relatable. He is an ordinary young man, who admits to wanting to sound deep on “WaterFire,” being low on funds, and the humor of it all. (See: “Guitar Hero” and “2AM Thirst Ballad.”)

Well-crafted tracks are half the battle when looking to be a big musician, so shout out to swell, Tedd Boyd, Latrell James, Mike Irish and all of the others. You all have done a stellar job.

P.S. Khary, I know people are dying, and that you have a passionate outlook on the following, but receipts are necessary too. You’ll see when you start paying “rapper taxes.”