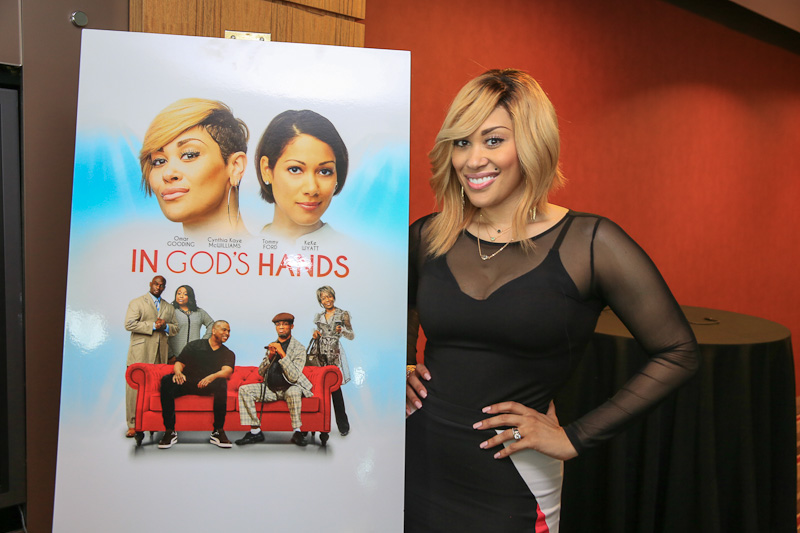 Platinum-selling recording artist and R&B Diva KeKe Wyatt took Atlanta by storm yesterday as she promoted In God’s Hands, a new stage play written and directed by Alvin Moore, Jr. and produced by One Village Entertainment and Swirl Films. In God’s Hands will be available on DVD (Amazon) and digital download (iTunes) on July 15.

Throughout the day, Keke participated in interviews with key media outlets including Fox 5’s “Good Day Atlanta,” Radio One’s Praise 102.5, 11 Alive’s “ATL & CO” and CBS Radio’s V103 and WAOK. The highlight of the day was an exclusive meet and greet at Twelve Hotel in Atlantic Station where local and national press were invited to speak with Keke about her involvement in the play. Attending press included Britt Middleton (BET.com), Dea Winfrey (Freddy-O.com), Kia Kellibrew (Sister 2 Sister), Kim G (Jubilee Magazine), Yvette Caslin (Rolling Out) and many more.

To kick things off for the meet and greet, Nina Henderson Moore, President of RLJ Entertainment – Urban, provided remarks about the RLJ brand, the importance of urban films in today’s culture as well as RLJ’s plans for current and future digital initiatives. Nina also introduced KeKe and stated how inspiring she is to women and how excited she is to have her as part of In God’s Hands.

After the introduction, KeKe participated in a very candid Q&A and kept everyone laughing with her special brand of humor. During the discussion, she shared her thoughts on her involvement in the production of In God’s Hands, how she relates to her character ‘Angie,” and important themes she hopes people take away from watching. She also talked about her career as a music artist and a reality TV star and concluded by sharing inspiring words for women looking to be a part of the entertainment industry.

After the Q&A, Keke took photos with guests and autographed copies of the In God’s Hands DVD. The play features an ensemble cast including Tommy Ford (“Martin,” ”The Parkers”), Omar Gooding (“Hangin’ with Mr. Cooper,” ”Playmakers”) and Cynthia Kaye McWilliams (“Prison Break,” ”Real Husbands of Hollywood”).

In God’s Hands will be available for digital download and on DVD at Amazon, Watch Image and iTunes on July 15. Watch the official trailer below: