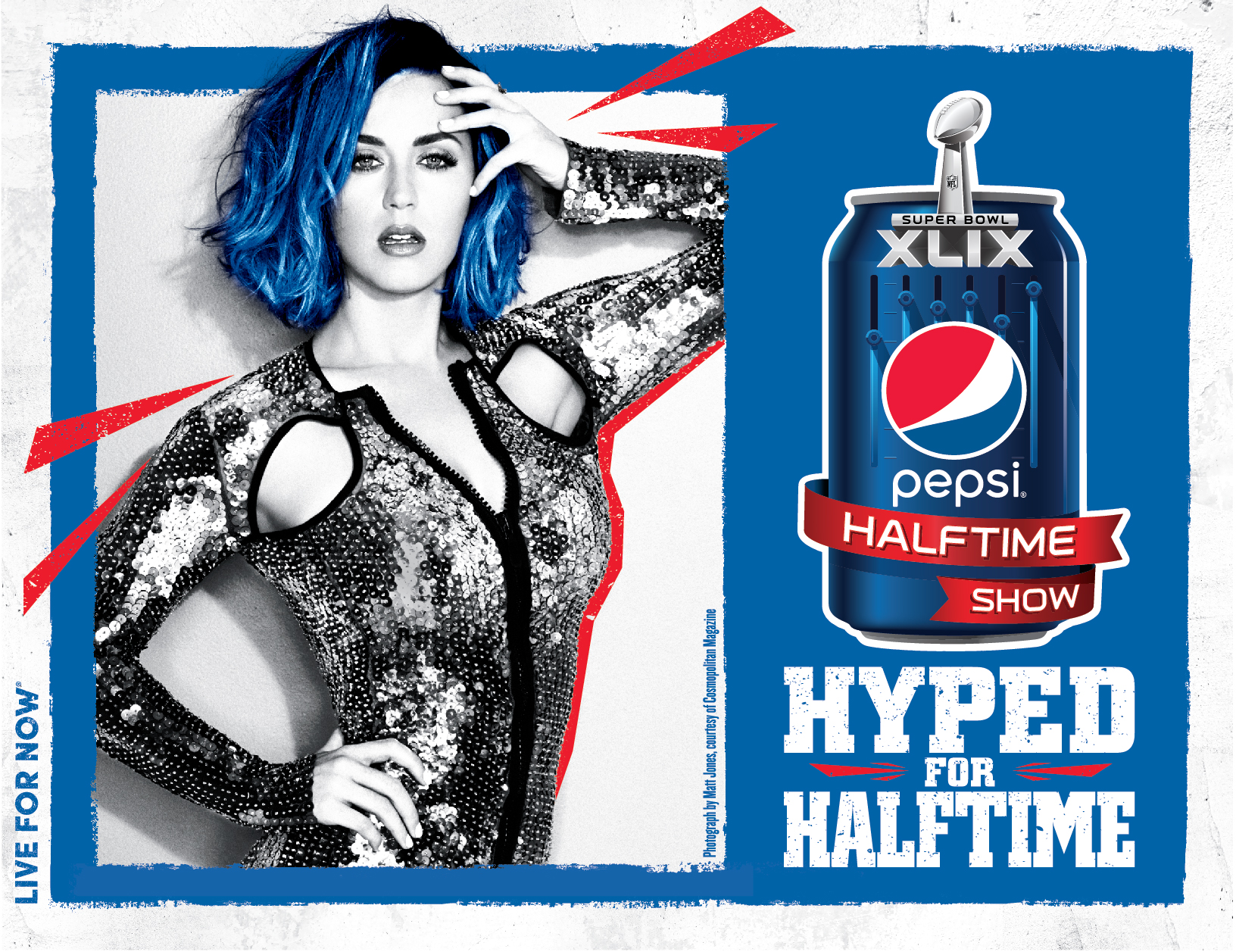 Katy Perry will headline the Pepsi Super Bowl XLIX Halftime Show on NBC in University of Phoenix Stadium in Arizona on Sunday, February 1, 2015, it was confirmed tonight in an unprecedented multi-media, global announcement. Katy acknowledged the performance on Twitter while watching the Dallas Cowboys – New York Giants Sunday Night Football game in Australia where she is currently on her Prismatic World Tour. Bob Costas announced the performance to the television audience at halftime of the Cowboys-Giants game on Sunday Night Football, primetime TV’s #1 show. This triggered the launch of an original digital video featuring Katy produced by Pepsi. Later in the night, Pepsi’s acclaimed commercial “There Since The First #Halftime” re-released to Katy’s award-winning song “Firework” debuted during the telecast.

The Pepsi Super Bowl Halftime Show is the most-watched musical event of the year. More than 115 million viewers in the U.S. watched last year’s show. The Super Bowl and halftime show will be broadcast worldwide.

Katy Perry cemented her status as a best-selling superstar with the global success of three multi-platinum studio albums – her 2008 debut One of the Boys (which generated hit singles “I Kissed A Girl,” “Hot N Cold,” “Thinking of You” and “Waking Up In Vegas”), 2010’s Teenage Dream (which made her the only female artist to have five No. 1 singles from one album on the Billboard Hot 100 chart – “California Gurls,” “Teenage Dream,” “Firework,” “E.T.” and “Last Friday Night”), and her current album, PRISM. “Roar,” the lead single from PRISM became Katy’s 10th No. 1 Top 40 track after debuting at No. 1 on iTunes in 68 countries with 557,024 downloads in its first week of release, the biggest digital song sales week of 2013. Katy set the record at Top 40 for most total weeks (46) at No. 1 in the Billboard airplay chart’s archives with “Dark Horse,” and Mediabase has just recognized the song as #1 Most Played, in addition to awarding Katy the title of #1 Artist across three radio formats – Top 40, Hot AC and AC. She is the first artist to surpass the 75 million digital award threshold, counting digital downloads and on-demand streams – 20 million ahead of any other artist. She is currently touring the world on the Prismatic World Tour, which continues to be a hugely successful global spectacle, with 17 sold out arenas in the UK, 66 sold out arenas in North America and 25 sold out arenas in Australia / New Zealand during this year. The tour continues in 2015 throughout Europe, Asia and South America where Katy will headline Rock In Rio in Brazil on September 25.

This announcement is just the beginning. Fans are encouraged to tune into NBC leading up to Super Bowl XLIX to see what Katy Perry has in store for this historic Halftime Show. Katy Perry joins an esteemed list of recent halftime acts that includes Bruno Mars, Beyoncé, Madonna, The Who, Bruce Springsteen & The E Street Band, Tom Petty and the Heartbreakers, Prince, the Rolling Stones, Paul McCartney and U2.

PepsiCo continues to leverage its diverse multi-brand portfolio – including Pepsi, Frito-Lay, Gatorade, Quaker and Tropicana – with the NFL to connect with fans and enhance their NFL experience. Pepsi returns for a third year as the title sponsor of the Pepsi Super Bowl Halftime Show, bringing the brand’s Live for Now mind-set and one-of-a-kind consumer engagement platforms to provide fans a halftime experience worthy of pop-culture’s biggest stage. This year, Pepsi continues its steadfast focus on the fan with its “Hyped For Halftime” campaign, which will culminate at the Super Bowl.

The Pepsi Super Bowl XLIX Halftime Show is an NFL Network Production and will be executive produced by Ricky Kirshner and directed by Hamish Hamilton.

Immediately following the Super Bowl Halftime Show announcement, Pepsi aired its “There Since The First #Halftime” commercial featuring Katy Perry’s award-winning single “Firework”, which can be found below: