Last week, I talked to Nia (Karen Obilom) from BET’s new show ‘Games People Play’ to discuss her role as a reporter and friend to Vanessa (Lauren London) on the show, her Hollywood experience, Nollywood movies, and what else she’s been working on. As someone who has been in love with writing since I was a child, I couldn’t help but wonder if journalism was a personal interest of hers, so I asked. 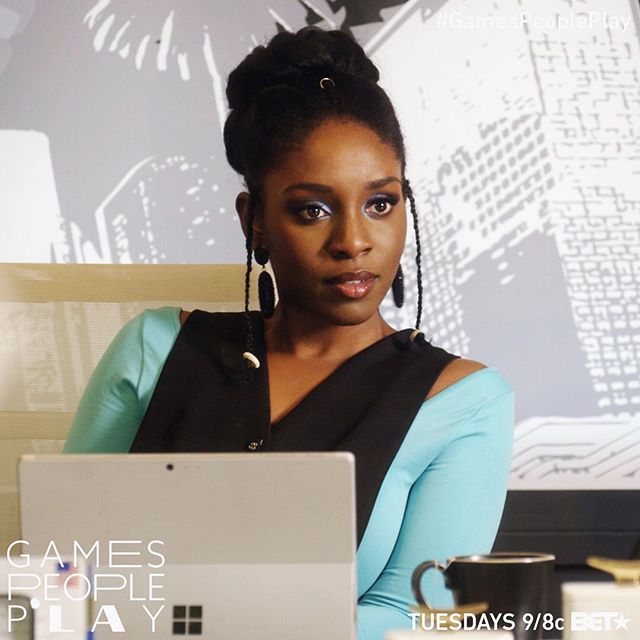 “Journalistic… I’m a writer for scripts. I am currently writing a movie. I think that’s the extent of my journalistic pursuit. I’m writing right now for film and TV.”

Next, I followed with a question about her understanding of the neutral position of a journalist or reporter.

“I understood it before. I think I’m always in awe of journalists and news reporters and stuff because they always… like when Gayle did an interview with R. Kelly that was so brilliant because she was just staying so calm and neutral. Honestly, I need to be like that in my everyday life, so I always thought they were very…just I always looked up to them because they’re always so neutral and grounded.”

Naturally, I wanted to know if we—the viewers—would get an in-depth explanation of her relationship with Vanessa (Lauren London) over time.

“I think it’s the first episode in the season, she is conflicted because her boss wants her to write about Vanessa–her situation. And I know things that the public doesn’t know. [Nia] knows the juicy stuff, so if it gets out their whole family can be pretty much ruined, so she’s conflicted because it’s like her job or her friendship, and so that’s her navigating that, and she’s navigating that throughout the season.

“It hasn’t been too Hollywood actually. I’m not someone that goes out a lot or party and stuff. I do, sometimes. It has to be with my close friends. My Hollywood experience has been trying to find a good tribe of friends. I’ve found that. I’ve been very grounded throughout the years that I’ve been here. Honestly, I’ve had a great time. I’ve had the time of my life here. It’s not too bougie. It’s not too materialistic here. It is there, but I don’t really attract that I would say. I just have a good time here.”

For anyone of colour who wants to act, direct or produce like you, what kind of advice would you give them?

“It’s like all one big industry with writing, acting and producing. I would say you can do all of it, but just make sure you put as much energy into one thing as the other. You can’t just half-ass things because so many people are doing the same thing, so you have to do the best that you can do, so you can stand out and always be yourself because no one else is going to be like you. No one is going to write like you. No one has your point of view, so you don’t shy away from it. Just use who you are already because you’re interesting enough to write a script or play this character, or etcetera.”

And you are Nigerian, yeah?

I have a Nollywood question for you. Are you a fan of Nollywood films and if so, what is your favourite?

“Like, honestly, you can’t watch Nollywood without being a fan. It’s not like you’re going to watch it to see an award-winning movie, but you’re going to be entertained. That’s for damned sure. Like, when I was growing up I never sought out to watch it, but I was always watching it because my parents always had it on and I was glued to the TV. I loved it. I love them, but they’re so fun to watch.”

I remember watching one and one of the character’s names was Beyoncé.

Oh, my goodness! I remember. I think there was one called ‘Rihanna vs. Beyoncé’, and there were like Nigerian girls with like blonde wigs on. Like, what is this nonsense? I don’t want to deal with Nigerians right now. No! No! No! No! They’re hilarious, honestly. You can’t be mad at them.

As a pro-Black Lives Matter and Black Girl Magic person, what do those two movements mean to you?

Everything. At the end of the day, I am a Black woman, and without knowing me, that’s what you could see that I am. So, the first thing you see is me being a Black woman. And I mean, some people live in that, and some people don’t, and I choose to live in that. And I choose to be proud of it because there was a time I wasn’t–it wasn’t like a big thing for me. Now, I’m like ‘Oh, it’s lit being Black. I’m so thankful and so grateful for my skin colour, for my culture, for heritage and my community around me. How can I not be proud of this? So, I’m an advocate of Black Lives Matter. I’m an advocate of Black Girl Magic. I’m rooting for everybody Black. Period! You’re not going to catch me slipping. Like, that’s just me. So, that’s who I am. Yeah!

Before the end of our conversation, I learned that her boyfriend and she have worked on a play. They’re sending out the tape for donations, so they can fund their film. It’s a high comedy based on two African-American women. The next step is to make the trailer for it. She’s going to begin shadow directing. Don’t forget to tune into the show on BET every Tuesday night at 9 PM EST. So far, we enjoy the way the story is unravelling.