“If you’re a fan of me, you’re really just a fan yourself!” — Kanye West

Kanye West is one of those artists that you either come to understand more, or less as his career builds into the ‘monster’ that it has become. He’s polarizing to say the least, but there’s no denying what an impactful role he has in the current scope of the music scene and he was slated to close out the opening night of San Francisco’s Outside Lands Festival on the main stage. The festival itself, has become Northern California’s largest and is growing quickly to Coachella-like size every year. I stayed posted on the main stage after Disclosure’s dance-inducing effort to be as close up for Kanye as comfortably possible…after all, there’s something to be said about watching him perform in the flesh instead of just on festival jumbo screens. 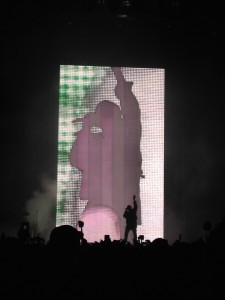 Daylight had disappeared and out trotted ‘Ye, wearing what’s become his signature ornate mask. Before we could breathe, the harrowing drums of “Black Skinhead” started pounding and the crowd let the musical energy pulsate through their veins, making their bodies move however that energy told them to. THAT was exactly what he wanted to happen. He wanted us to start losing control and giving in to his audial output. Shit… EVERYONE around me was feelin’ the vibe. 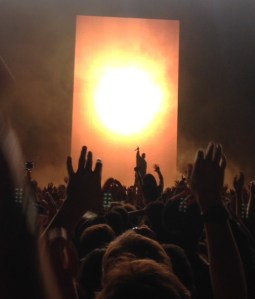 Four songs in, Yeezy went in to his first rant, which was tame in comparison to “big idea” diatribes in the past, but it led right into “Clique” and what eventually became the theme of his set. One of empowerment, connection to his fans and giving props to peeps for supporting him from one album to the next. But it seemed like this theme was lost on a lot of people. You see…the response from many festival-goers throughout the weekend (most of whom admitted that they weren’t very close for the set) was “Yeah…he was ok…” and largely cited how Kanye kept waxing on one of his rants or  stopped the music to get sections of the crowd to “make a circle!”.  But to me, it was just Kanye being Kanye and I think that this is where the lovers and the haters differ. Cause this is what he does…and you just gotta laugh with it and hold tight to see what he’s gonna do next.

The thing you have to understand about Kanye, is that he believes everything he says. He has well-formed ideas in his head and nothing that comes out of his mouth is ridiculous to him. THIS is what makes him not only a unique artist, but a unique superstar. There’s certain artists (no names) who are…how shall i say this lightly…full of shit. But this Kanye dude? Nah. He believes in the art of what he does. He believes (and knows tbh) that his words speak volumes to his audience and every sentence carries a lot of weight. He knows how to command 100% of a crowd’s attention and at one point, went from “Heartless” to “Jesus Walks” to “All Falls Down” to “Touch The Sky” and climaxing with “All Of The Lights”…You think he had everyone’s attention then??

When i worked at Rap Genius, we followed seemingly every breath of Kanye West and i came to appreciate him for the artist that he is. One that cares deeply and passionately about the impact he has on music, art and the people that listen to his music. “I promote self-confidence!” he said at the show. Think about that…Kanye wants YOU to feel empowered and good about yourself when you listen to his tunes; Lose yourself in it and forget about who you are or aren’t, if only for a moment. Just like the mask he wears for most of his set, his music is like a mask over your face…It doesn’t matter who you are or where you come from…It’s your time to FEEL and when we let go of our notions about who’s around us and soak in this incredible music he’s created, it’s empowering. 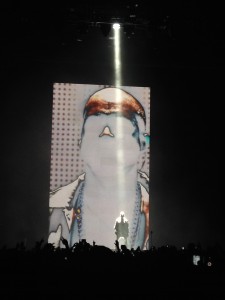 I shall end my own rant there and go back to talking about his setlist. How when he played “Jesus Walks” it took on an entirely different meaning than when that song dropped 10 years ago. Look what he has become in that time span! How “All of the Lights” was the highlight of the set and everyone was hanging on every lyric. How he played “Blood on the Leaves” not once, not twice, but THREE times! Who else can pull that off? Probably the same guy that enlightened our youth to the beauty of Nina Simone. The encore was two different takes on that jam and i laughed and loved it. You gotta laugh at a dude who plays the same song three times to get it.

This was the kind of set that made you wanna go home and fall in love with My Beautiful Dark Twisted Fantasy again. It was the kind of set that when Yeezy likened his intentions to those of Andy Warhol, you just had to nod and smile and bounce. Cause they’ve both been under the pop culture microscope and here we were absorbing it with ‘Ye. To fully appreciate Kanye, you gotta remove your preconceptions and consider how the world looks through his eyes. Look at where he’s sitting…and i’ll re-iterate, he’s NOT full of shit. Quite the contrary, he aims to build you up, the listener, and look at how many followers he’s garnered.

Yeezy taught me. [Puts diamond in the sky]

Can’t Tell Me Nothing

Blood On The Leaves (multiple false starts; abandoned for finale)

All of the Lights

Blood On The Leaves

Blood On The Leaves (Reprise)