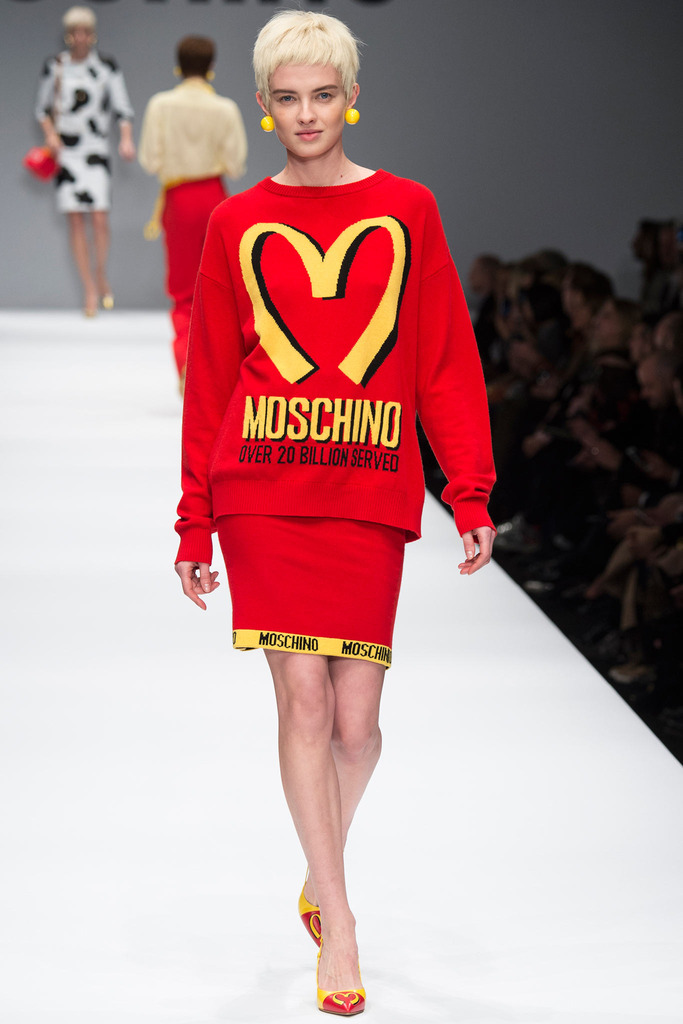 During Milan Fashion Week (MFW) Moschino premiered it’s Fall 2014 RTW Collection to much controversy and polarizing reviews. Whether you’ve heard all the mixed reviews or not, or are still wondering why, let me sum up the reason for all the hype in two words. Jeremy Scott. Amidst all the talk of celebrities arriving fashionably late and getting booed, as Katy Perry did, you may have seen pieces from Moschino’s Fall 2014 collection – thee collection that has fashion connoisseurs abuzz. Since the onset of his career Jeremy Scott was infamous for creations that most “thought” no one would wear. While Scott has had some controversy in the past with a shoe designed for Adidas, a minor snag in this fruitful collaboration – Many complained the JS Roundhouse Mids, alluded to slavery (given the shackles) but Scott credited the shoe design to that of My Pet Monster. In the end Adidas decided to scrap it. If you know who Scott is, and you are familiar with his aesthetic, then it is easy to understand his vision, although during the process of creating sometimes lines get blurred. Overall Scott’s collections, and his collaboration with Adidas always brings a fun, lighthearted energy and childish, cartoonist perspective to the largely serious, tailored and sometimes stuck up industry that we call Fashion. He is the Michael Jackson of the fashion industry, living out his childhood, wildly talented and largely misunderstood. 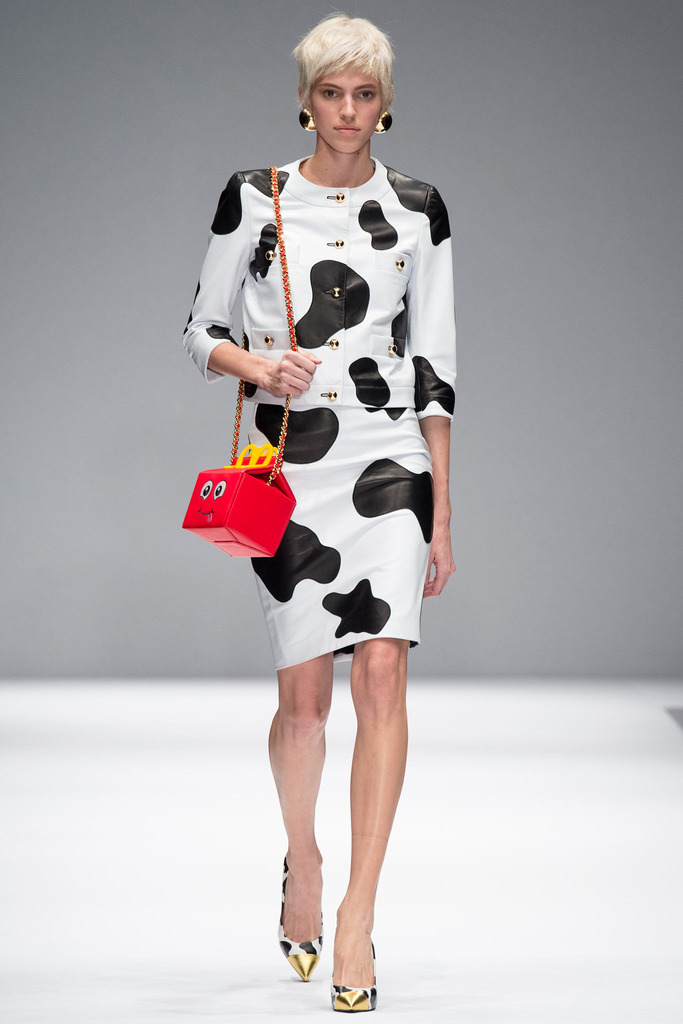 Enter Moschino. Also, known for their controversial take on fashion, Moschino celebrated it’s 30th anniversary in 2013 and amidst the celebration made a significant change and hired Jeremy Scott as the new Creative Director. Scott replaced Rossella Jardini, who held the Creative Director role since 1994, at the time when founder, Franco Moschino passed. MFW debuted Moschino’s ready-to-wear collection with Scott at the helm to rave reviews from attending show-goers. One thing is for sure. You either loved it or hated it. There really was no in-between.

Why We’re Lovin’ it

Moschino’s collection was a play on junk food and consumerism from a fashion perspective. While at times the looks were literal and borderline infringing on copyrights and trademarks, Scott played along the edge of creativity very well. The first items to grace the runway were that of Bold complementary hues of red and yellow. Drawing memories from our Ronald McDonald, Golden Arches, and happy meal childhoods. Of course. The imagery made us laugh out loud. In fact, it’s Scott’s humor that made this collection so enjoyable that you wanted to see what else he would spin ingeniously, and he did not disappoint. 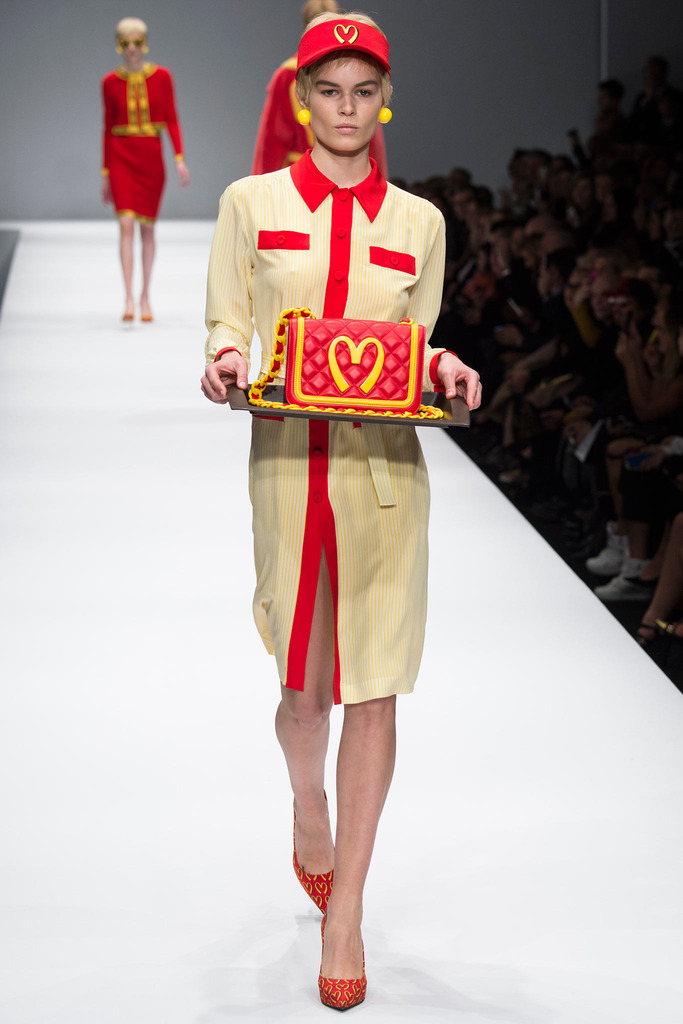 My favorites are the Coco Chanel inspired suits, done every which way, along with the many pieces infused with leather, denim, quilting and over the top golden hardware, buckles, logos and accessories. These looks were fun, over-the-top and badass. 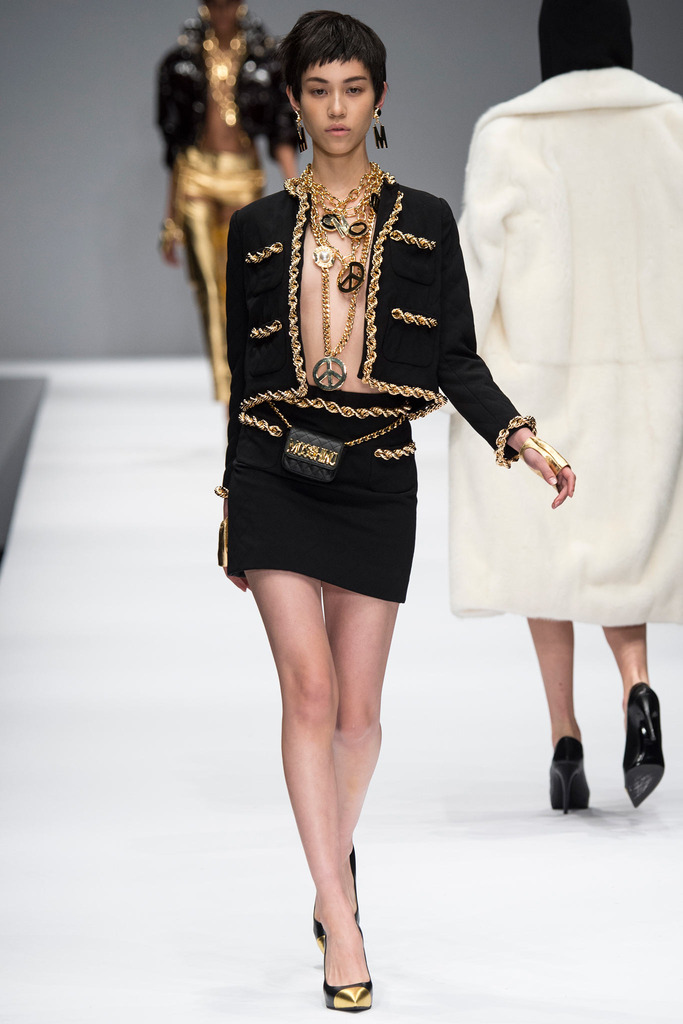 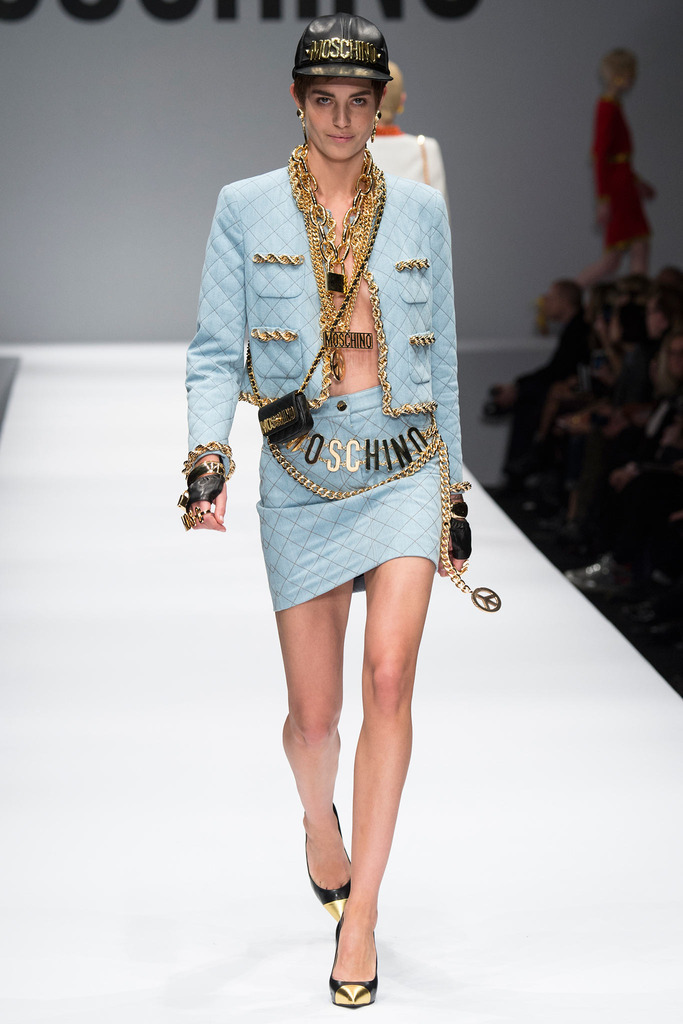 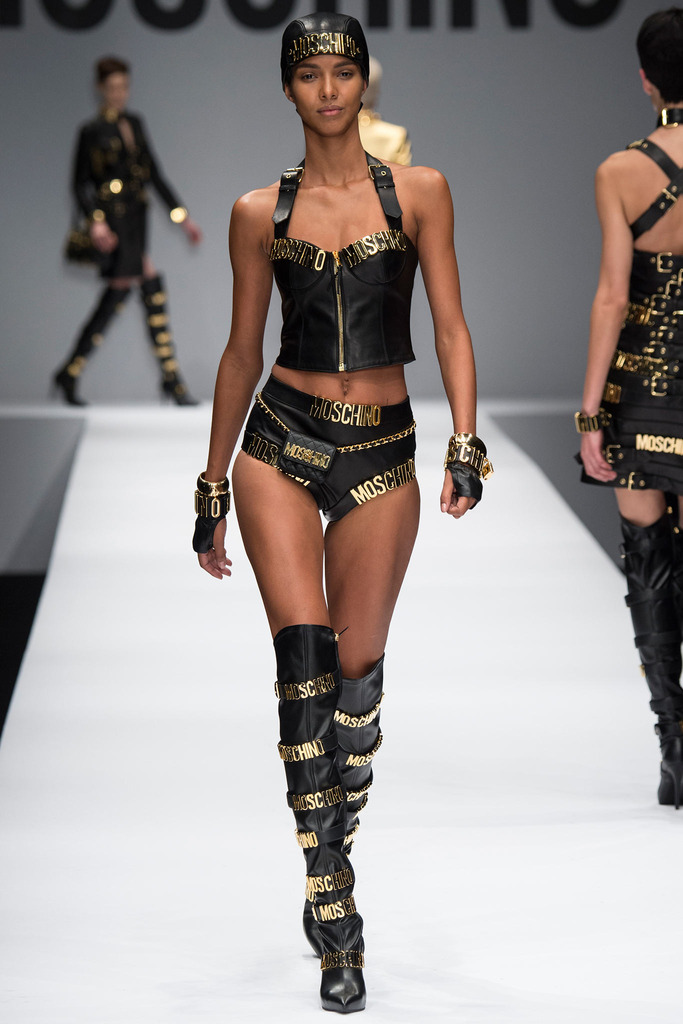 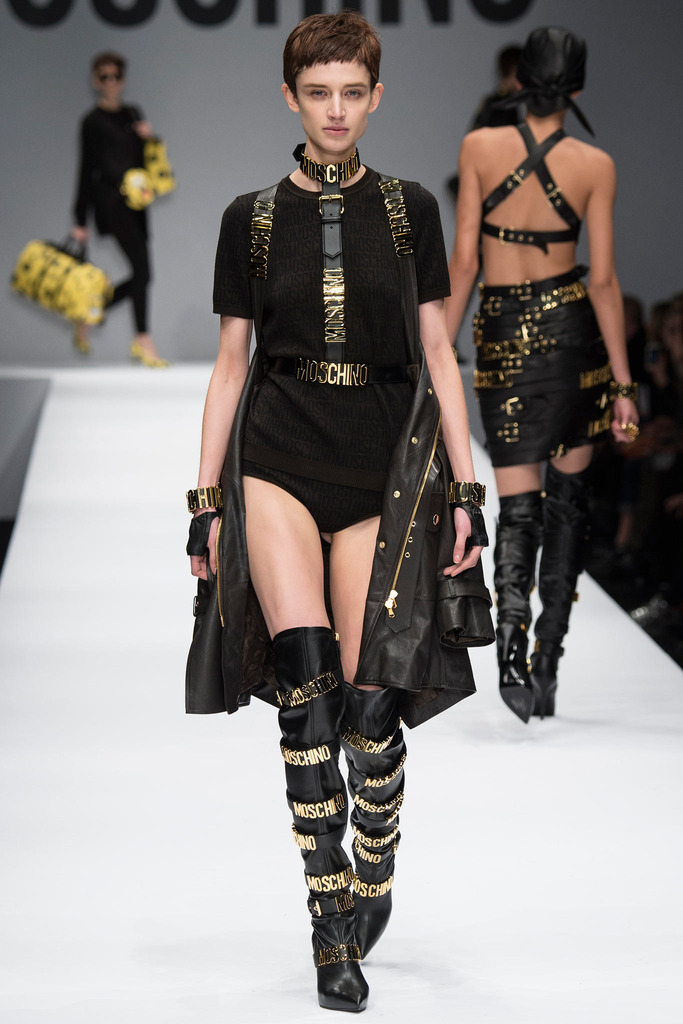 Character in a Front Row Seat

Spongebob made a brief appearance and that was to be expected given his playful spirit, and love of cartoons. I’m happy it wasn’t overdone and he kept these items to a minimum of 7 looks with only 3 or 4 looks being obvious. 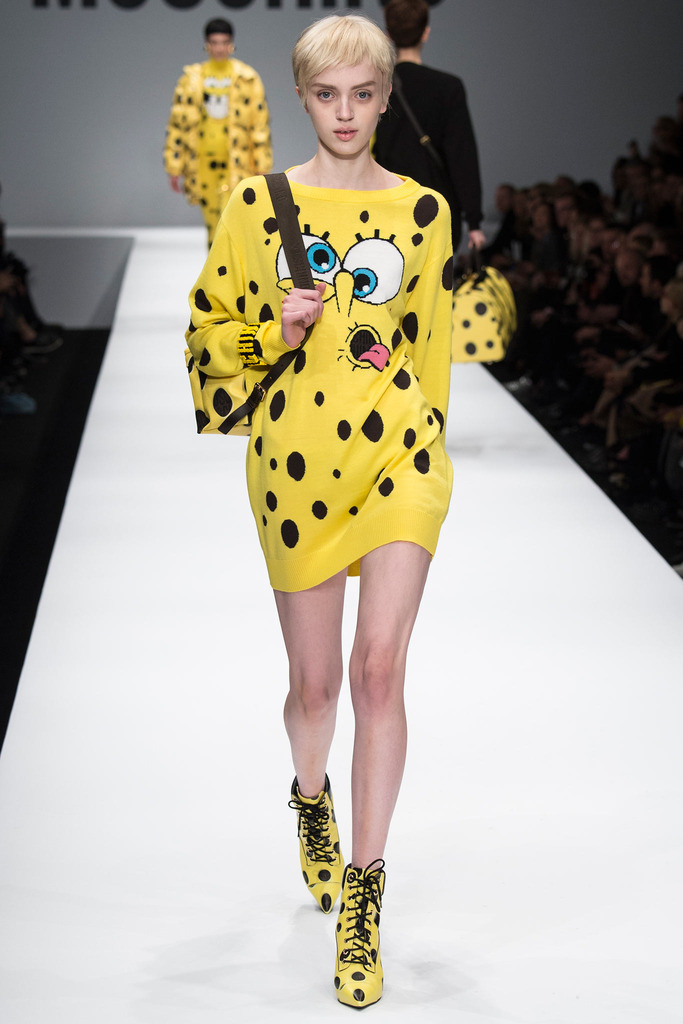 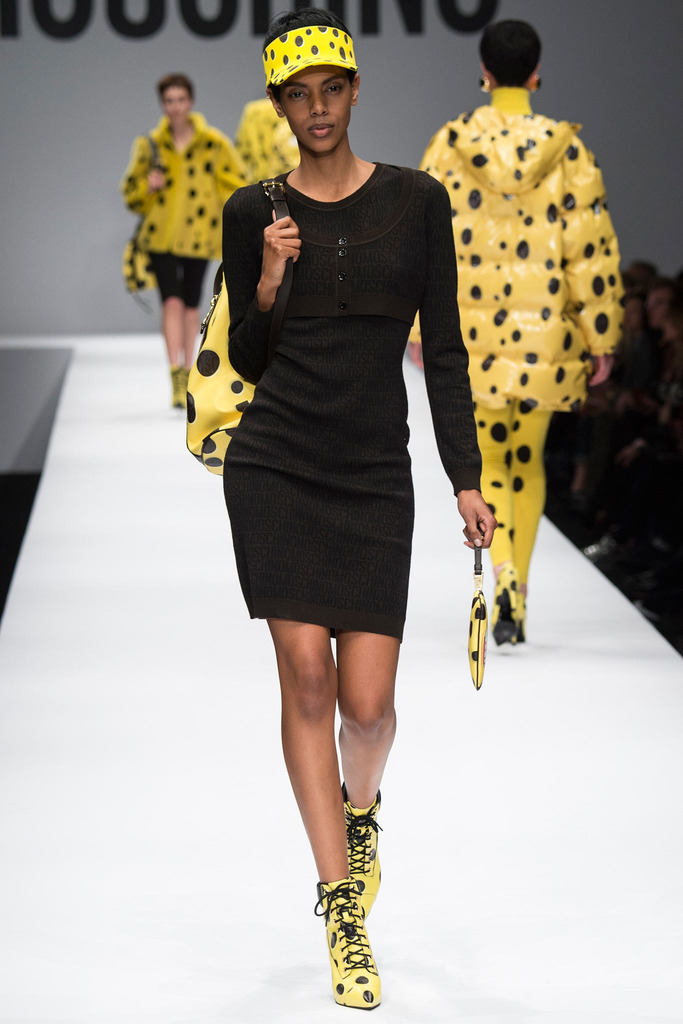 You wear what you eat

The finale was very tongue-in-cheek, pulling graphic consumer and packaging images from Beer, Cereal, Hershey’s chocolate, Gummy Bears and why not? Nutrition Facts, no frills included. Scott didn’t just give fashion the proverbial finger, he came for us as well, the consumers, and we are in fact eating it up! 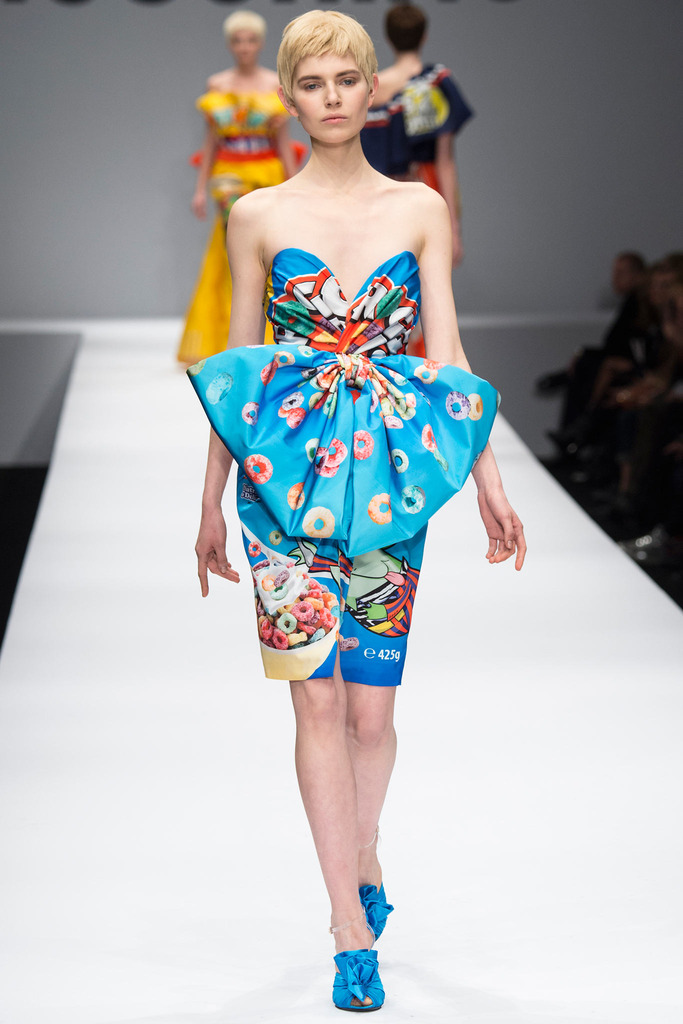 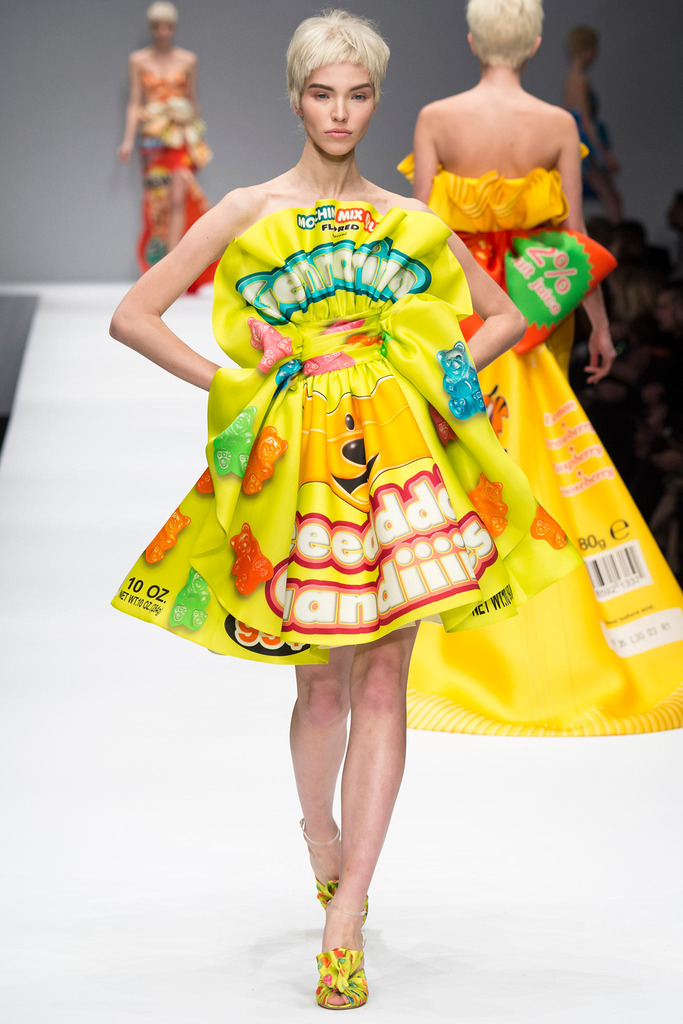 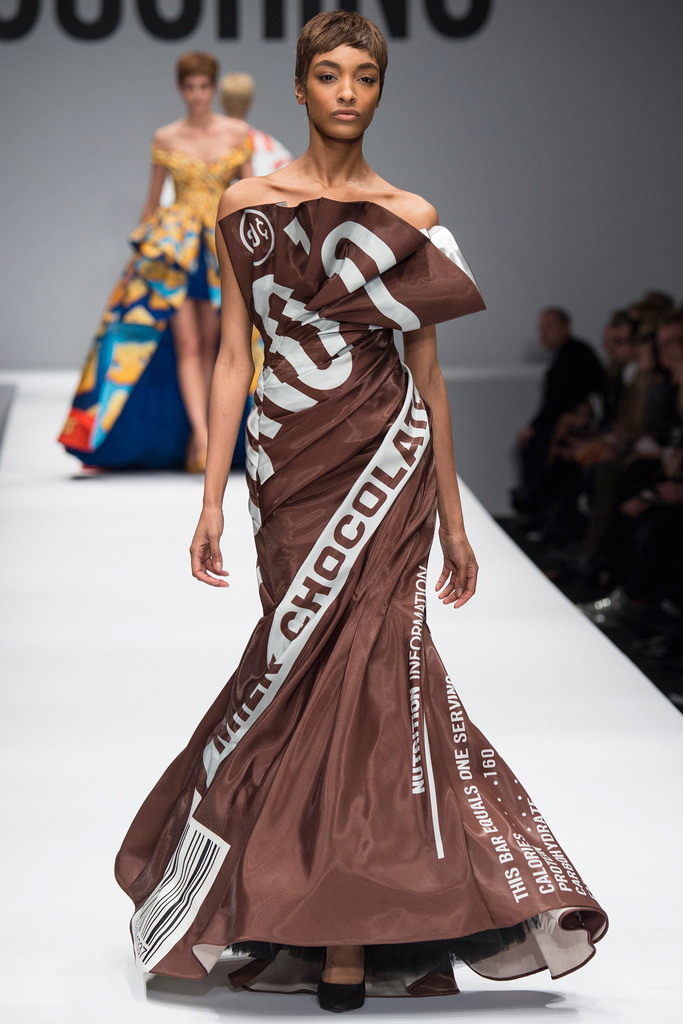 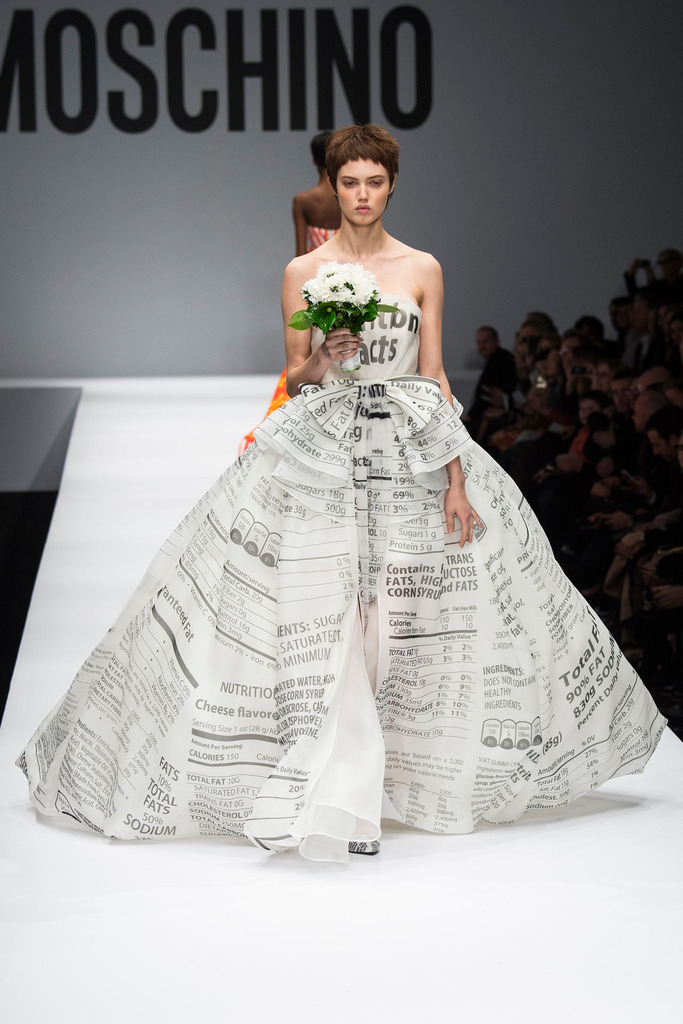 Kudos to Scott for staying true to himself, knowing what we like, shoving it in our faces, capitalizing on it with a Major brand and of course making us laugh about it! If you are upset by this collection, just remember, Fashion is subjective. You may not wear it but you probably eat it, albeit in secret. Moschino knew what they were getting with the decision to bring him on board and no doubt they are “Lovin'” the attention right now!