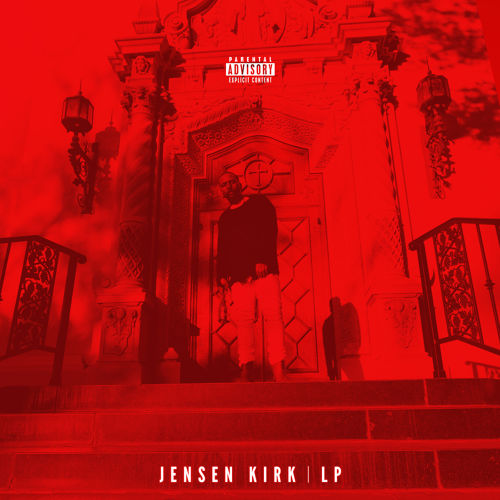 Jensen Kirk is a South Central, Los Angeles rapper who has been working hard to break through in the game. In 2008, he was previously known as Jay K and scored a Summer hit on the radio called, “California Girl.” Since then, Jensen Kirk continued releasing music and building a following.

With his new self-titled LP, Jensen opens up the project with “Life & Times,” sounding confident as ever. A few tracks into the LP, he could remind listeners of West Coast artists The Game, Nipsey Hussle and Skeme. In no way is he copying any of them, he just has that Real-Nigga-Attitude the way he approaches tracks. He’s real straight-forward. “Born Killas,” where he talks about how America views black youth, starts off with him saying

“Fuck the police / I’ma scream that shit until I D.I.E. / My people hate they own kind cause that’s all we ever seen / Shoot a nigga in front of his momma, welcome to the streets.”

No witty wordplay to get his message across, just passion.

“The Beginning” details his struggles in the industry over the years while claiming he’s just getting started. “Wit It Tho’” featuring Polyester The Saint has the two getting at beautiful women and gives off the vibe of something you would probably hear on a Dom Kennedy or OverDoz. project. “The Dogg (Interlude)” featuring Sean Auguste is a greatly appreciated tribute to the late Nate Dogg, referencing songs of the West Coast legend throughout the verse.

Super Miles, Medi, and G Rocka who individual and collectively, along with Tariq Beats and PJ Escobar, provide a nice variety of beats that flow perfectly together for Jensen Kirk to express himself. He’s able to speak about his personal life, his ambitions, social and street issues, women and more on this LP. There is a song “A Million,” where Jensen seems to be singing on the hook and in the verses that come off corny. The hook is too generic and sounds like an attempt of making a radio record while the “Light Show” seems like the obvious choice for the radio without sounding forced.

This is a very strong LP. The only thing it could’ve used was a real creative track that would make Jensen stand out against the likes of Kedrick Lamar, Big Sean or any current rapper. Compared to some of his earlier work, he’s made a drastic change so I believe by his next album he will be even better.