Like your average surfboarding theme song, ‘SOL’ by Shotski embodies the nuances that make you feel danger is ahead. Whether it is a wipeout or a large-finned sea creature, it is coming closer; decision-making needs to occur right now.

Detroit’s own Guilty Simpson takes to a SonikCuts beat to give thanks and acknowledge the people he loves. The late nineties-style production evokes nostalgia and shines a light on fellow Detroit legends. As I listen to the record, I cannot help but wish J Dilla was alive to make an appearance as a rapper or MF DOOM. Rest in peace, Jay Dee.

If you’ve ever watched a high-intensity soundtracked television commercial, this is the kind of song that would play for an All-American brand collection debut during back-to-school time.

‘Sedona’ has the kind of tongue-in-cheekiness that happens to be right up my alley. If you’re a fan of music made for large spaces or My Chemical Romance, Houston-based trio JunkBunny may suit your needs.

‘Sedona’ was a song that we wrote early on, once we started to write our own music. It’s really cool to see the end product of an idea that started with a simple vision of a road trip vibe. We are super thankful for the hardworking and supportive crew that helped make our vision for the video a reality.

How beautiful is their debut music video? How nice are the waves in that hair?

Everything shouldn’t be complicated or laced with words, and for moments like that, there’s Canadian-made music like ‘GA FFA’ to explore and enjoy. Here’s the twenty-three-year-old producer’s latest release.

We keep saying this EP feels like a confectionery, mentions Nadia Garofalo (keys, vocals), which can be misunderstood in that a confection is often seen as lacking in nutritional value or substance. However, they can hold significant symbolism, seen as a more precious sustenance, celebratory, comforting or a show of gratitude. We assign moral weight to them and to ourselves for consuming them, ‘I’ve been so bad’ or ‘I shouldn’t.’

To be completely honest, the vision behind the music video and its execution is what made me like ‘Buio’. It’s from the Chicago-based band Ganser’s forthcoming EP: You Must Be New Here (out November 18).

If you are often stressed out like the people I know and surround myself with, you know how much we adore anything that aids in calming us down. From the production, vocals and the visual, ‘Someone’s Mistake’ is the perfect concoction for calmness.

I’ve heard that if you haven’t gone through anything, the music you make won’t “feel” like it. Either your imagination has to be vivid, you’re around someone who greatly influences your writing, or you’re just great at understanding what people want; give it to them. The ‘Jetfuel’ singer has experienced a tragic experience, which left him unable to fulfil his promising career as an athlete. Now, he’s making songs.

Jelani Aryeh said, “I think of ‘Where We Go’ as being The Godfather and ‘Jetfuel’ as being The Godfather Part Two, where it’s the sequel/follow up to the original, but also the prequel. I presented a story of what I was feeling at a particular moment in time but not really talking about what lead me to those feelings in the first place. ‘Where We Go’ is the actual release of the pent up feelings that were building up and the confronted in this song ‘Jetfuel.’

Listen to the nineteen-year-old recording artist to learn something.

It’s odd because it’s produced like one of those high-intensity EDM tracks, but the vocals are subtle and calming. You can totally either play this in your headphones on your way to bed or jump on the dance floor to the instrumental version.

Ever spent an afternoon in the Summer at Maison Kayser? ‘Lilac Moon’ seems like the style of song that would get heavy rotation on the store’s musical playlist. Atmospheric and stylistically similar to that of Capital Cities, which happens to be a musical duo that I love, Paco Versailles is for music aficionados who don’t mind brunching on any given day, just for the jams. 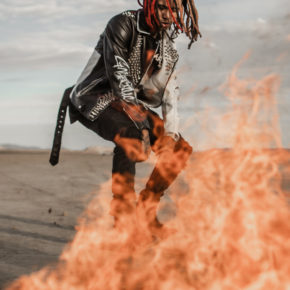