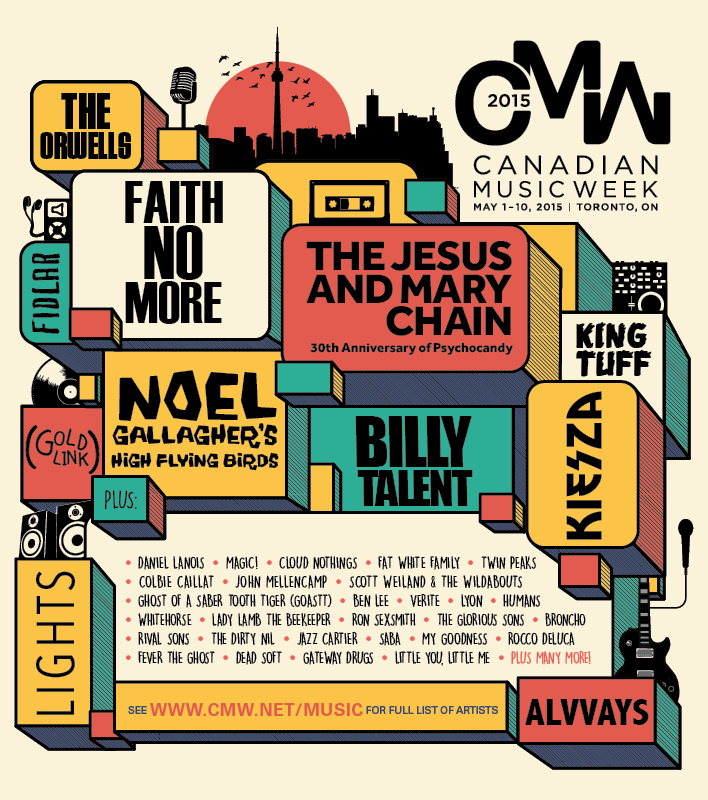 Canadian Music Week (CMW) announces a stellar list of headlining artists as part of its 2015 festival programming including The Jesus and Mary Chain: 30th Anniversary of Psychocandy, Kiesza, GoldLink, LIGHTS, FIDLAR, King Tuff, Billy Talent, Noel Gallagher’s High Flying Birds, Cloud Nothings, Daniel Lanois and more (see full list below). This year will once again feature The Concert Lottery. Offering CMW wristband holders the chance to guarantee a spot at some of the larger shows during the festival, and the opportunity to optimize their time during festival. Now spanning 10 days CMW will showcase over 1000 bands at more than 60 live music venues in downtown Toronto, May 1-10.

To see full list of artists performing at CMW please via this link. Stay tuned for more programming announcements!

10-day festival wristbands are available at the early bird rate until February 4th! Wristbands allow access to all showcases throughout the week. Fans can purchase them via this link. Tickets for guaranteed entry to Canadian Music Week events are now available for purchase via this link.

** Tickets for The Jesus and Mary Chain: 30th Anniversary of Psychocandy will be available Friday, January 30.

The CMW Concert Lottery is back again this year. It offers CMW wristband holders the chance to guarantee a spot at some of the larger shows during the festival, and the opportunity to optimize their time during festival. The Concert Lottery will be announced via CMW’s social platforms: Twitter, Facebook, and the CMW website along with an RSVP link for fans to follow. To view further details via this link.