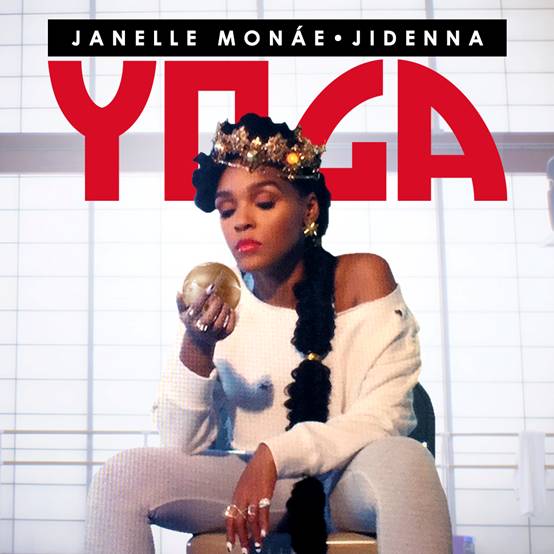 Get ready to ‘flex it’ with Janelle Monáe and Jidenna’s visual for their Wondaland hit, ‘Yoga’. The video starts off with an opening scene reminiscent of the chill session in Janet Jackson’s ‘That’s The Way Love Goes’ video, sans the men. The usually fully clad Janelle Monáe is donned in a more casual look, wearing loose boyfriend jeans, a black cropped halter, and some heels to boot while strutting her stuff in the mirror and dancing her little ass off with her girls. The crooner goes on to crash a yoga class as the gold-crowned yogi, conducting the class with her gold cuff embellished braid swangin’. As Jidenna’s verse rolls in, we see him about to partake in a candlelit dinner of waffles ushered in by two waitresses who seem to be in heat for the artist. I can’t lie, I was looking forward to seeing Jidenna partake in some yoga to some degree, even if he was just playing the instructor. Moving right along, Janelle, along with her crew, rejoins the scene by bombarding the diner to turn it into a hype, late-night after-hours spot. Who knew yoga could inspire such festivities?