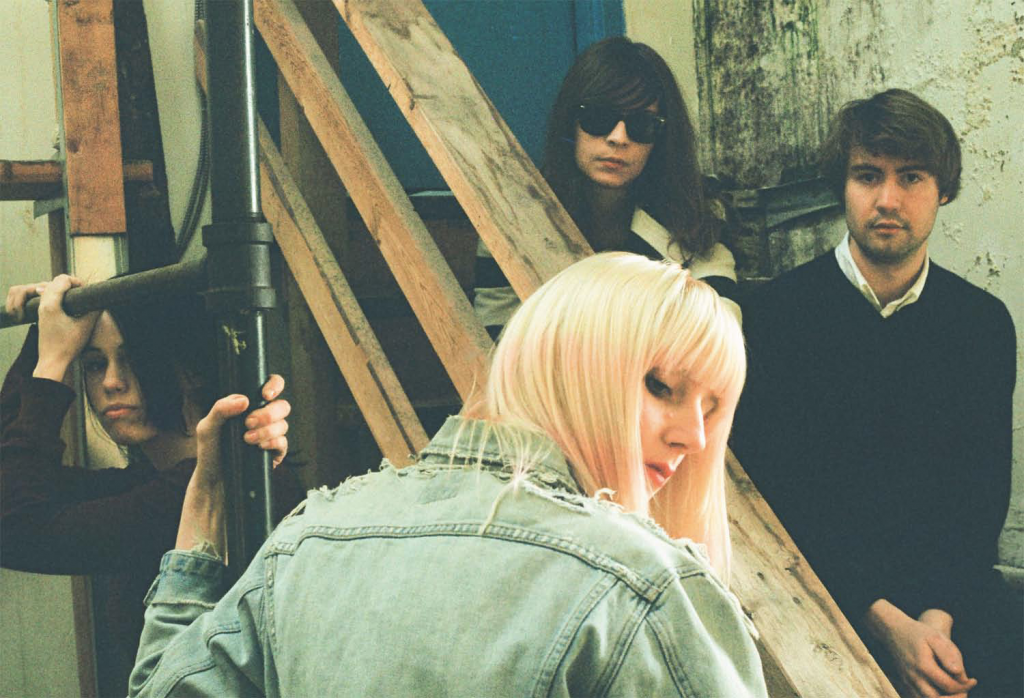 Perhaps, they White Lung was tired and ready to go is all I can come up with. Not nearly as high-spirited as they were on stage, White Lung, the stupefying four-piece Canadian Punk Rock band from Vancouver joins us for a quickie at Village Voice’s 4Knots Festival.

Today, it was warm and sunny weather on South Street Seaport, so taking full advantage of the open bar on 4Knot’s VIP Peking Ship was rightfully managed. Upon arrival, Hunters just started their dear set at Pier 17 Stage and Fat Tony, an emerging Hip-Hop act from Houston was next to dispatch lyrics. From the bow, we all watched, danced and listened to Fat Tony as he told us about obese rappers from Houston, that’s he’s Nigerian and (if my memory serves me right) that White people are going to like his songs. In addition, he probably propelled more vulgarity than anyone under 5-years-old needed to hear. After all, it was an all ages event.

[highlight]Just to be clear: That’s no scorning or disdain against the only Hip-Hop act on the bill. I’ve known Punk rockers to say the words “fuck” and “bitch” more than Jenna Jameson’s been fucked in the ’90s. However, the time of day and the tone of the evening wasn’t a great match.[/highlight]

Two minutes after 3PM, I finished my melonade drink and headed to the stage where White Lung performed. It was my first time seeing them live, so I didn’t expect much. However, I was hoping they would blow me away, and that’s pretty much what happened. Before then, I’d only listen to their albums at the office but we all know there’s nothing like live music. Quite vividly, I remember watching Mish Way’s bootymeat jiggle in animal print pants whilst belting some mean and steely vocals. In between lines, she elegantly terminated bottles of water. You should have seen her. Kenneth (guitarist) and Grady (bass) were cranking the tunes and Anne-Marie (drummer) was in the back killing the Ludwig drums. It was amazing.

Two hours later, I found myself asking Mish about the origin of the band’s name and today’s set. She explained that “white lung” is what bakers get due to inhaling particles of flour or sugar in a bakery. It is another term for “bakers lung” or formally known as “occupational asthma,” a lung disease. The name was given by a friend and because it is pretty much an all-girl band, she didn’t want to come with something soft — like Dandelion Pussy, perhaps. Their 4Knots set list was arranged exclusively by the band.

Since the occasion is what brought us together, I decided to ask about their impressions of 4Knots and if they were pleased with their crowd:

What did you think about the show and the crowd? Were they like your usual crowds?

K: It was a lot of people here. It was fun. I haven’t had the chance to hang out on a boat but, I’m really excited to do that afterwards. I like that it’s right on the water.

M: That it didn’t rain and I get to watch the men and Kurt Vile perform and I got to see Izzy from Hunters and her boyfriend Derek was very happy to see us… and the hotel!

K: I think they covered it all. Good bands. It’s fantastic!

M: GrungeCake? Like a cake that’s dirty on the floor. A dirty cake.

A: Well, when I think about it more, I think: Long hair, like grunge dudes eating cake.

K: I just imagine a cake that doesn’t take really good. Kinda like chalky. Just not put together very well. Ingredients didn’t go right with each other. A big mess.

White Lung is not coming back to New York until next year when the new record is released. The upcoming record is untitled as of now because a fellow band from Vancouver named their record the same thing, so now, they have to come up with a new name.

“It sucks because it was a really good name! She (Anne-Marie) made it up. It was really good. Too bad!”, says Mish.

We wonder what it was, and if we can recommend any “GrungeCake” is never off-limits. Good luck guys! For more White Lung, visit their Tumblr. It’s full of images of the band and pop culture princesses like Kim Kardashian, Amanda Bynes, Lindsay Lohan, and other blondes.