Profoundly influenced by many styles of music and its eras, the huge hybrid sound that uhlife mentions in this interview stands present in the debut free mixtape “(barely)uhlive”. Hovering over beats produced by our [underground] industry’s favourites, the baleful ghoul tells a dark story of torment and irretrievability that surprisingly lightens up at the end of the project with lines like “trying to leave a dark past in my hindsight” on “(barely)uhlive” and “My eyes to the new dawn / If you ain’t making moves with me, let me move on / I’m on my grind like I should be.” on “dear whoever,”.

After being briefed on the correct pronunciation of this buoyant soul’s name, “a life” like “get a life of luxury”, the child of darkness shares a first memory of recording and how important music it is.

When a juvenile rascal, the rogue rap spitter moved around alot and recalls the dark and grim sound being a reflection of life.

“I was going through some really dark grimy times… just really fucked up. A lot of emotional rollercoasters, a lot detachment, a lot of pain, a lot of betrayal, a lot of loss… Just crazy stuff. All the content you hear on the record, how dark it is, is pretty much the story… It’s very much about my life.”

Music is one of the first things that touched this vital force and it hasn’t left yet. Sitting on a floor with a recorder and being taught which buttons to press on the boombox is the rapper’s first memory. Swiftly, the 6-year-old recorded first rap lyrics. Arguably, an undiscovered child prodigy of sorts. For uhlife, music is not a new idea or guidance.

Other than style and choice of delivery, the disobedient figure is truly admirable. Because of loves ones who would not be able to identify with the music, the use of derogatory words like “fag” or “nigger” is nixed.

Uncommonly detailed when replying to inquisition and seemingly victorious over recurring adversaries, somehow, it does not leave unattractive dimples. In fact, the faceless is very attractive. As proudly stated in my favourite song “Side chatter doesn’t matter / I’m moving straight.”

Listen to my favourite song on the free mixtape “bowser” produced by Jonwayne. 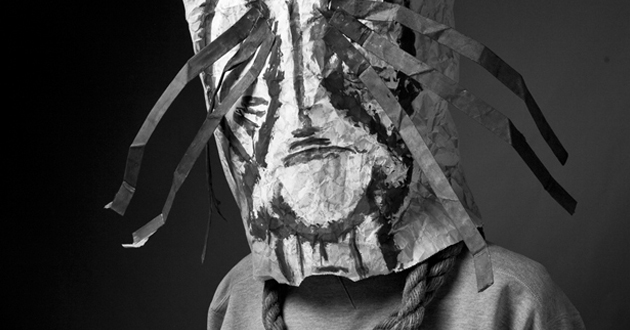 “I never made it a point to try and sound ‘up-to-date’. The only thing I tried to do — which took me years to get to — is fuse all the music that most heavily inspired me into my raps, into what I do. And I guess that’s what creates this huge hybrid sound that I guess everyone is saying that’s ‘up-to-date’. I think moreso, we’re in this new globalized era where everything is connected and music isn’t so specific anymore. I am definitely apart of that era. I came up in this era.

On why he covers or hides his face

“RAJA, other than Absent Avery, is the only producer I know personally on that project. The rest is all free mixtape fashion, but RAJA I know personally. It’s a funny story with RAJA, how we linked up. It was this one Summer I was out beat digging. There was this one blog that I followed that only promoted producers. Being a rapper who wanted to rap on beats, I am very very into production. I follow producers like I follow any other type of musician and I just love listening to instrumental music period…

I loved the tape. I just fell in love with it from the get go.

I had no clue who this person was and then, I ended up meeting him that Fall. I believe in fate. I don’t believe in it 100%, but I believe in fate in this universe. I remember I was in this place getting some food and I bumped into somebody I knew and I was wearing a Dilla shirt.

And they were like, “Aye, what’s up? How you been?” and I just started catching up with them.

Just being polite, I said what up to everyone at the table and then, this one person at the end of the table was like, “Hey, I like your shirt, man!”

That’s one of my biggest inspirations.

And I was like, “Nah, I don’t produce. I rap, but I’m obsessed with production. I love production.” and at that point, I had just started getting into producing. Trying to teach myself.

And I was like, “Oh, for real? What do you go under?” and he looked at me and said “InfinitiRock” and I just looked at him real real hard for a second.”

Listen to the full interview now.

About the name: Keep it lowercase, it’s just a belief system. It isn’t that important. Do not put so much emphasis on it or the ego. However, people can spell it however they want.

Listen to the full project below.