Before your minds wander, the group is still together. Taboo is just on a journey of his own like his fellow band members Fergie and will.i.am. This is his first introduction to the world as a solo artist and as you’ll learn by reading this interview, he’s always dreamt of being able to speak to his community, and to make a song that best represents his upbringing. Wait until you read about what inspired “Zumbao” and what he has planned for the song.

“This is my first initial introduction to the community that I’m from. I’m Mexican-American and I’ve always dreamed about being able to speak to my community and to make a song that best represented my upbringing. I actually grew up watching Spanish television,” Taboo says. “So, I wanted to implement Spanish idols that I grew up on. From El Chavo del Ocho to Pitufos. When I grew up, I didn’t know about The Smurfs. I knew about Pitufos. So to me, growing up, I knew about these people: Don Fransciso and El Gordo y la Flaca.”

For the readers not familiar with Spanish television programming, El Chavo del Ocho is the equivalent to Sesame Street or Reading Rainbow. Pitufos is the Spanish translation of The Smurfs. As a young boy, Taboo used to watch these cultural icons with his abuela (grandmother).

He recalls of his childhood heroes, “I dreamt of being apart of these iconic Latino shows and Don Francisco”, a 73-year-old Chilean television host and a popular personality on the Univision network, “is a very symbolic person in our community because of Sábado Gigante and just remembering those shows and all these things as a child. I wanted to implement that in the song. The music itself is very catchy and very infectious. Yes, it’s all in Spanish but it’s so infectious that even if you don’t speak Spanish, it’s going to gravitate to you and it’s gonna pull you in like Gangnam Style, We No Speak Americano by Yolanda Be Cool. You didn’t know what they were saying but they’re speaking Italian but for some reason — sings the hook — it’s infectious and it pulls you in and that’s the type of song ‘Zumbao’ is.”

I agree. So, this is your first time being solo?

“Yes but for the record, we’re still a group. It’s my first time doing an individual project. There’s misconception that when you do an individual project, you left the group or the group is disbanded. That’s not true. Fergie and will.i.am were very successful on their own and we came back and created the biggest selling album in our career which was ‘The E•N•D’ with dance singles like “I Gotta Feeling” and “Boom Boom Pow”. It goes to show you that, even if we work on individual side projects, when we come back, it’s still going to be a big reunion and a humongous impact.”

That’s kind of like Andrew Wyatt from Miike Snow.

Miike Snow, do you know the Swedish pop group Miike Snow? They did the song “Animal”?

He released a solo project too and they’re still in a group so I completely understand what you’re saying. I get it.

I kind of look at like how Wu-Tang Clan — they had the [Enter the] Wu-Tang: 36 Chambers and Ol’ Dirty Bastard came out, and Method Man came out and Raekwon and they all had individual hits but it was still ‘Wu-Tang’. [It] was always representative of each individual and each chamber. That’s how I feel Black Eyed Peas is. alp.de.ap does a solo project. He’s doing it for the Philippines because he’s Filipino. I’m doing a solo project. I’m going to direct it to the Latin market but it’s going to bleed into international markets because of where I come from.

Very nice. You also have a very unique sense of style and you’re originally from L.A., right?

Can you talk about how that’s influenced your style, if at all?

Well, I’ve been a sneakerhead since I was like 12-years-old. My fashion starts with my sneakers. I’m a collector. I’ve been a hypebeast or a sneakerhead for a while. Whatever flavour I’m feeling with my sneakers, that’s how I dictate my outfit and my style comes from Hip-Hop culture. I’m inspired by people like Kwamé with the polkadots from the ’89-90. I’m inspired by the old Big Daddy Kane dope gold chains to the De La Soul D.A.I.S.Y. Age to the funkadelic type of afrocentric attire. That’s the world that I come from. De La Soul to A Tribe Called Quest, Boogie Down Productions, Big Daddy Kane as far as Hip-Hop. Then, as far as like style goes, I’m very influenced by streetwear couture. For example, you’ve got brands like D9 Reserve and brands like Damn Pigeon and Crooks & Castles who incorporate a little bit of streetwear but they’re also high-end minded with their cut and sew pieces. I’m all about that. Mixing a little bit of Zara in there but having like dope Yeezy’s or a dope YSL jacket or a Rick Owens jacket. Just to mix up the flavor and let people know that there’s no boundaries on fashion. That separates people that are willing to take a chance and just experiment. And that’s why I like to mix and match my clothing with high-end mixed with a little bit of streetwear.”

It looks good. You’re truly multitalented. I think before the uprise of millennials and everyone doing things themselves, you’ve always done multiple things like singing, rapping, acting and the list goes on. Is there any other skills that you’ve been honing in on?

I would probably have to say showcasing me as an individual. I haven’t proven myself yet. This is my first initial single and I can’t say that with it only a week out that it really hasn’t made a huge impact. I want to start it small. It’s about growing this brand or the movement. It’s what the brand is about. It’s about something that best represent a song and it’s also a dance that goes along with it. Merchandising. It’s all about “Zumbao”. It’s not about me. I would never take credit for what I’m creating on my own because it’s a whole team that’s making this happen for me. So I would say, really prove myself as an individual so I can brand Taboo as an individual. I come from a big mothership but the reality is that I still have the yearning to be able to kind of create my own individualism outside of my mothership. It’s very important for me. Especially in my community, the Latino community. I want to be a hero in my Latin community. Alot of people don’t know that I’m Mexican. People think I’m Asian. Some people think I’m Filipino. I’m like ‘I’m not Asian. I’m Latino. I’m Mexican. That’s why I wrote this song in Spanish so people can know, ‘Yo, this dude speaks Spanish.’ His upbringing is authentic. He’s genuine. He’s not trying to pretend to be a Spanish-speaking artist. Like I do I can speak Spanish. I am fluent and I’m just proud and honored to be able to represent my community.

And then just speaking on being Mexican, and also Native American, yeah? 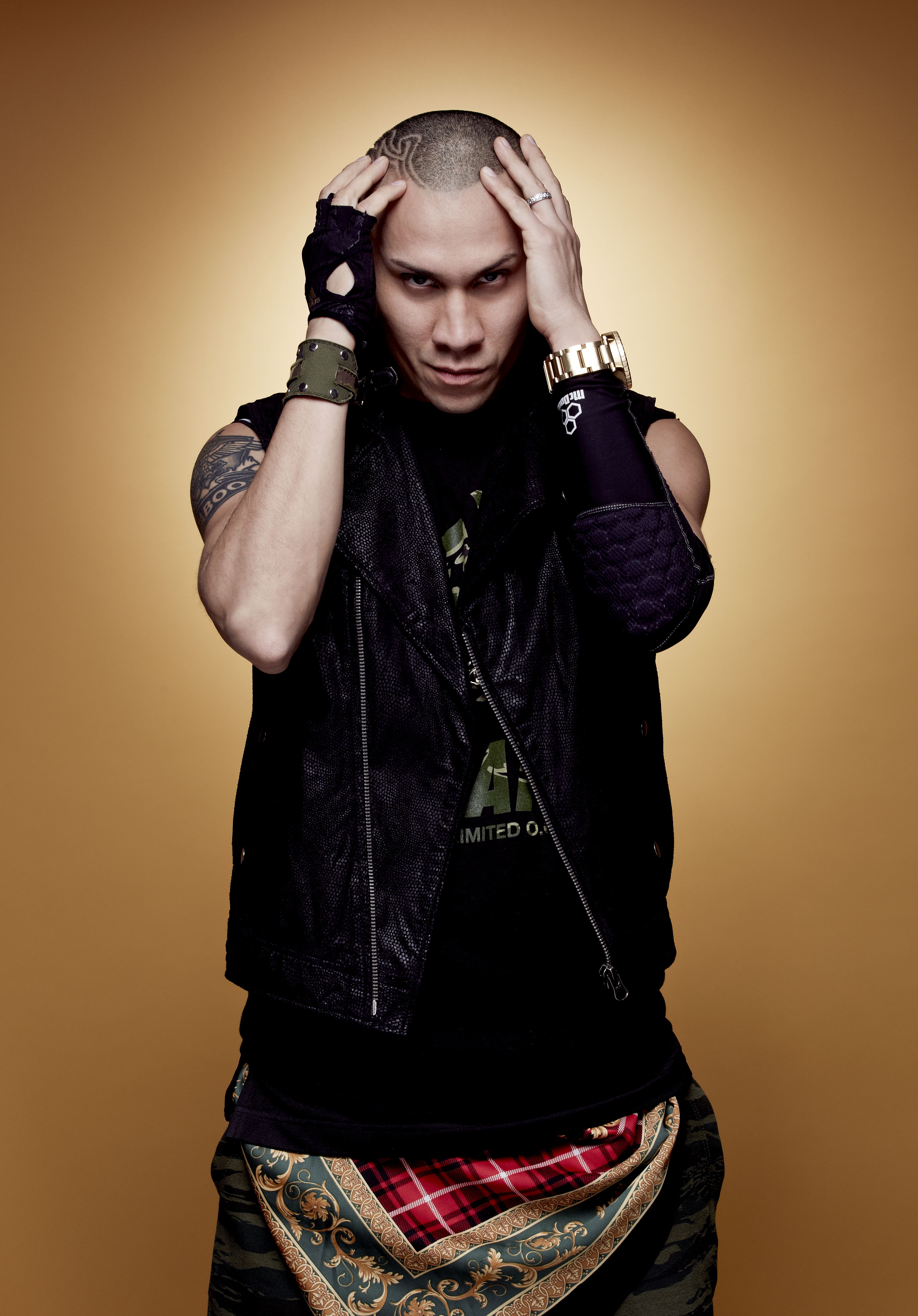 Well, I read that you were the first Mexican-American to perform at the Super Bowl halftime show.

Yeah, that was amazing. As a kid from East L.A., you never imagine being the headlining act at the Super Bowl. You know, the biggest stage for us Americans. The NFL is like the crème de la crème when it comes to American sport more than any sport, and to do that was just a great chapter in my career as a Mexican-American but also as an Entertainer.

Congratulations on that. That’s amazing. Can we look forward to an official music video for the single?

Yes, as a matter of fact. I’m editing it this week. It’s going to be out within the next two weeks. I’m very blessed to have Kathryn Burns who did the “Happy” video with Pharrell. She helped direct it. So, it’s going to be really fun, exciting. It’s the first time that I really dove into cold choreography. Me as a dancer, I’ve always just danced but now I’ve got the opportunity to come up with cool dance steps. We created the Zumbao dance. The Lor Brothers helped me come up with the “Zumbao” dance.

The name of my magazine is called GrungeCake — like Kurt Cobain, Nirvana and birthday cake — when you first hear the name what comes to mind?

GrungeCake? I would say: Stage-diving in a mosh pit.

That’s amazing. Okay, thank you so much.

*Update (May 16, 2014): We’ve learned that Carlos Santana﻿ is actually the first Mexican-American to perform at a Super Bowl halftime show. Mr. Santana was naturalized in 1965. One of our readers pointed it out. Thank you.