QUIÑ has been on an upward incline.

QUIÑ is working. Kylie Jenner played her song in a Snapchat story last week. Before that, she sang on G-Eazy’s song ‘Think About You’. Then, QUIÑ appeared in The Internet’s ‘Special Affair/Curse‘ video. Fellow Californian G-Eazy returned the favor and appeared on ‘Over Again’.

Not much makes me more excited than women who work for their positions in the industry, so when asked to interview her, I saw it as a privilege and a way to support another young woman. Originally I was supposed to talk to QUIÑ on the telephone. However, my phone was low on battery. My artist and I went to the Starbucks on Delancey Street in the Lower East Side to charge my phone. That didn’t work to my advantage, so my questions were sent through an email. QUIÑ answered the questions with lengthy responses as if we sat together and talked. She’s my favourite kind of interviewee. 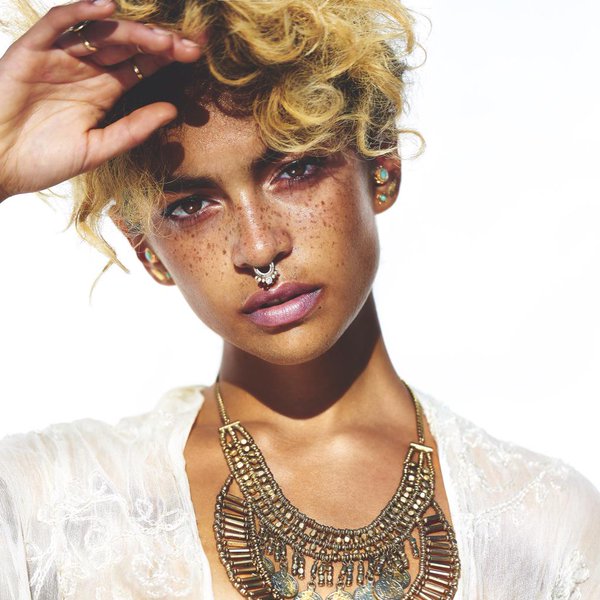 Young lady, are you in The Internet’s ‘Special Affair/Curse‘ video? If you aren’t, it sure looks like you.

Now that we’ve got that out of the way, your project is synonymous to warm cinnamon on baked goods. How long have you been working on this great body of music? What was your most memorable moment when creating “GALACTICA”?

Hey, thanks! I think it’s yummy. ‘GALACTICA’ is one of those things with a definite mind of its own. I never planned a home for them. The songs did that on their own. I made most of the songs earlier this year with the exception of “Over Again” and ‘Solo’ which I made a couple years ago… and after a good collection I felt like I was writing this book that I finally had to start putting page numbers on, so I created a story based on them. The most memorable moment was when NASA and Apple Music sent song “Lightspeed” to Planet Jupiter via Mission Juno.

For anyone who hasn’t the pleasure of hearing your speaking voice, how would you describe it? Is it anything like your singing voice?

No one likes their speaking voice. I barely ever hear it so I would have to ask about it. (QUIÑ smiles) To me, it sounds wild… I love my singing voice.

Where does the name QUIÑ derive? There’s a tilde above the ‘n’ in your name. Are you of Latin decent?

This is what QUIÑ is all about. My full name is Bianca Leonor Quiñones. I simplified it to QUIÑ, on my superhero tip but I’ll always be ‘B.’ I’m all of it. Quiñones is Puerto Rican. I’m all mixed up on my dad’s side, and my mother is Mexican.

What prompted you to want to be a musician? Do you have any formal training? Do you play any musical instruments? If not, would you like to learn? If so, which instrument?

I was in choir my whole life since I was 4 to 5-years-old. My mom went to an Episcopal church in Pasadena, CA called ‘All Saints’ so that’s where it started; All falsetto stuff and xylophones. After that, I sang in my high school gospel choir. I’ve been singing forever but I was too shy to consider a solo option. I’ve always been a great writer but I stayed in my bubble with all that. Then I went to college, moved to Oakland, and realized it would be way too selfish of me to not share my gifts with the world, so I changed my mind and moved back to Los Angeles.

Can we look forward to any new videos in support of your extended play? Which song? Famously, you’ve collaborated with G-Eazy. Any future collaborations you can share with us? Perhaps a remix for one of your current songs?

Videos are coming really soon! Collaboration wise, I’m just down to make conscious music with everyone, whose contributing towards the evolution of what’s poppin’ right now. Whoever that may be, we’ll soon see.

What do you like most about the recording industry? What is your least favourite thing?

I just love the ability to have a platform to share my creations. I would say the business part is my least favourite. Even still, it’s cool to be aware and learn new things about the career I chose, aside from what comes naturally. It’s all good, learning on how to be an ultimate boss.

Lastly, I enjoyed every song on your 7-track EP. These days, it is rare for me to enjoy all songs by new artists. Specifically, I replayed “Sea of Space.” What are you referencing in that song?

Thank you! When I first wrote it, I thought I knew what it was about. I’m always leaving lessons for myself, and singing to myself, in every song. When I say ‘Show me what you got God, I opened the door and fell into ya’, I was talking about this dream I had where I actually left my dream. I opened a door and landed in space with this lifejacket on (Hence, the “swimming”). That’s what the story was based on, in my head, when I initially wrote it. Then, I realized after listening later that I was talking about the truth landing in my lap, the whole time, and how I’d rather keep the truth with me because with that truth, it leaves me with eyes to see; I need them with me forever.

The truth is the ball of flames, and the big monster wave in the second verse. I pictured all these wild alien sea monsters coming to swim with me. I kept them as the truths I found along the way to keep me safe. (QUIÑ smiles)

@KylieJenner spreading the love around ✨ pic.twitter.com/bXvx9ekpbh