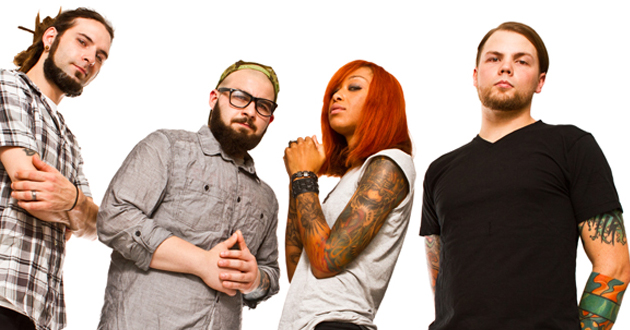 In June of 2008, while watching the band Lamb of God’s episode of “Headbangers Ball” on MTV, I was introduced to a band that would soon become one of my favorites, Straight Line Stitch. SLS is a metal / hardcore band that hails from Tennessee with a unique sound and a flair of their own. When listening to Straight Line Stitch genre goes out the window. Listen to one track and get heavy, chest rattling, head banging metal and the next could be a melodic ballad, this band touches on a bit of everything. Alexis Brown, the beautiful vocalist of the band, sat down and had a chat with GrungeCake about what’s been going on with SLS.

This time around I wanted to do my interview a little differently, so I took to the readers of GrungeCake and asked “What would they want to ask Straight Line Stitch, if given the chance? “ One lucky reader was picked. Continue reading to find out what the fans really want to know:

Who is Straight Line Stitch?

What would you categorize your style / sound / genre(s)?

Actually, we have no idea! We would rather not classify our sound. As a band and as a unit we don’t sit around and talk about what type of music we’re going to make. It’s really about getting together and feeding off one another. Producing whatever sounds good to us regardless how the tune comes out… soft, hard, or whatever. Our sound is very eclectic because we all have different backgrounds / influences, so we like to bring that to the table while writing. I like that because it keeps us from being pigeonholed as just one type of band that can’t do anything else. If it sounds good to all of us, then that’s what it is pretty much.

At what point in your life did you know that you wanted to make a career out of making music? Was there an event, person or thing, etc.?

Speaking for myself, I knew very early as a child that I wanted to be a performer, which is very odd considering that I’m the shyest person on the planet. I guess even back then I wanted to push myself out of my comfort zone and do something bigger than myself.

What do you enjoy more: Being on tour or recording in the studio?

I like them both about the same. I get excited and frustrated when recording because (on one hand) I get stoked to introduce new music to the world, but then again tracking and recording the final product can be extremely taxing because everything has to sound great and be perfect. With touring, it’s the same thing. I absolutely love being on the road; visiting and revisiting places and living the life of the road but again like anything else it definitely takes it toll on you. Mind, your health, and your stress level. Things happen when you’re on the road: family members get sick, your pet dies, you break up with your loved one. I mean all types of things happen when you’re away and it can be difficult to deal with. But that’s life, you have to take the good with the bad.

What has been the most memorable moment for you so far?

Being in a band can have its uncertainties and given the lineup changes that you’ve endured over the years, how do you maintain a will to persist and keep going?

It’s all I ever wanted to do and all I know how to do! So, that keeps me pretty focused on this path. I’ve put so much into this life that I just couldn’t walk away. It’s who I am and I don’t know how to be anyone else. We’ve all worked super hard, but I’m not gonna stop until I get to where I ultimately want to be. But that’s just me. I’m not a quitter.

As an African American as well as being a woman fronting a metal band, how do you feel you’ve been received in the metal community amongst your fans as well as your peers?

I think I’ve been received rather well especially by our fans and that’s because I’m not trying to be anybody other than me. I’m not up on stage or making records trying to emulate someone else’s career and I believe people can see that I’m genuine and that our band is genuine. To me, it’s not about the color of my skin or my genitalia. It might be about that to some people but not to me and our band. It’s about music and saying what I need to say. We’re not a super huge band or anything and maybe that could be attributed to my race or sex from our peers or by our peers but whatever, it’s their loss because I think we have a lot to offer as a band and as people in general regardless of me being a Black chick in metal band.