An infection worth getting. 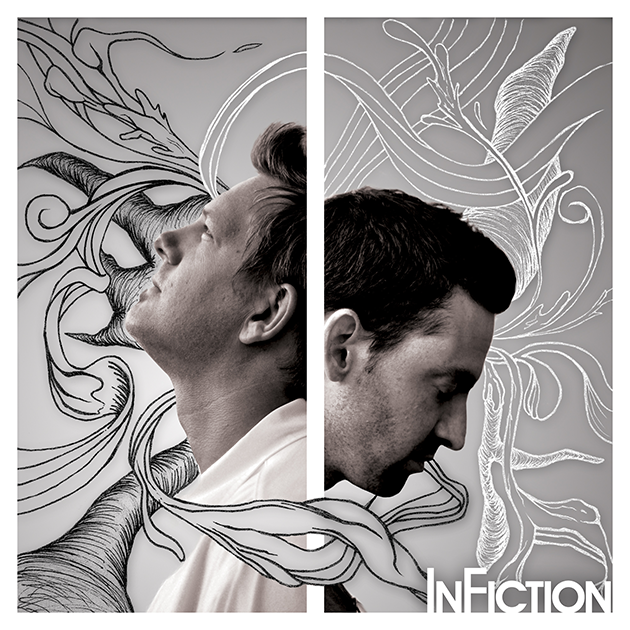 Creating their own path with a whole new sound and vibe, InFiction, the Los Angeles based EDM duo creates a sound that is described as stage theatrics mixed with a touch of trance, and a side of bass. Mood creators Dan Asma and Doran Oppenheimer are seasoned professionals who’s had their music featured on Paul Oakenfold‘s Planet Perfecto and have composed music for films such as The Mist, The Last Exorcism, Disturbia, Halloween and Black Swan to name a few. The style of music created by this power duo is unlike any other, turn on one of their tracks and it will teleport you to a place where you can feel the energy and what is going on without ever leaving your spot. If you’re looking to hear to something to help you break away from the norm and make you experience the music versus just listening to a track, Infiction’s experimental progressive sound will do just the trick.

Your name InFiction, how and why was that chosen?

Both of us originally come from a background in film so, storytelling and the art of storytelling has always been an integral part of our make up. I think whether it be the creation of a 30 second TV spot or the composition of a new dance track, our main goal is to create some kind of emotional response within the viewer or listener. By creating the right moments, by telling the right story, our aim is to take the listener on a journey, which by the end they will hopefully take something from it, whatever that might be.

Reading up on you, we have learned that you both have previously worked as producers / film editors. What are the major influences that changed you from producing films to creating music?

We’re still very much involved in the film side of things. Producing and editing trailers for films has really benefited us in the production of music as music itself is the driving force behind many of the trailers and tv spots we produce. The music in those trailers defines the tone, mood and pacing for the kind of story the editor wants to tell and has to do it all in a limited amount of time, sometimes as little as ten seconds. As editors, it helps to understand music, how to manipulate it and cut it to create the desired effect. Because we can’t always find the right piece of music, we started creating our own music beds for the edit. Learning the software to be able to do that just became another tool for creativity and thus a creative outlet for something other than film.

How was this union created? Give us a little history lesson on InFiction.

Growing up in South Africa during the 90’s my friends were all DJ’s at the time so I literally grew up on EDM which was in full force garnering international acts for a rave scene that would come alive weekly in cities across the country, pulling in thousands of people and creating a culture of love and unity. Something that we are only seeing in the Untied States today. When I first arrived in the States, the scene was very underground and was something people were not interested in. I wasn’t sure it would ever find a large audience here. I still followed it but my passion slowly wained.

Dan and I met 8 years ago when he opened a film advertising company and hired me to work for him. We connected immediately as we had the same sensibilities when it came to editing and music. Over the years Dan and I would discuss music and little by little I would introduce him to different EDM artists and music. His passion for it grew as did mine with the sudden explosion of EDM in the U.S.

One day he called me up to his office and told me he wanted to play me something. It was a composition of a progressive house song with a vocal he had put together and I was just blown away. So we sat together for a few days and tweaked it here and there and it became our first track.

Do you remember the first song you ever created? The very first one?

Yeah. It was called I Saw You. That’s the one he asked me to listen to. I think we’re to afraid to go back and listen to it now. We’ll just keep that one under wraps!

We listened to your latest album and we’re utterly impressed by the type of craftsmanship you have with your music. In the creation of this album, was there a particular theme or element you are creating?

Thanks so much for the compliment. I don’t think there is a particular theme we are exploring in “Io” (Like the Jupiter moon, not “Lo”.)

I think it has more to do with with simply bringing more dramatic elements to dance beats. I think that’s what makes it challenging to assign a genre to many of our tracks. A lot of Dance music is feel good and energetic, which it should be. People listen to dance music to release and let go of the drama in their life. But we like to split the difference. Meaning, bring a dramatic and theatrical element to solid, energetic beats.

Any touring plans for you?

As of now we have nothing planned. Our main focus right now is staying in the studio and perfecting our craft.

Since the music you create does not exactly have its own genre, how would you explain the style of music that you create?

We don’t really want to put a specific label on our music. It’s kind of like when we sit down to write a track, we don’t generally have a specific genre in mind. When starting, we try to stay open and allow the process to be the guide. Doing so allows us to make mistakes and sometimes that is where the magic and inspiration comes from. Those ideas will usually evolve into a sound that could be progressive or deep or even a hybrid of both. The moment usually defines it for us.

InFiction both creates its own music and remixes other tracks, which one do you enjoy the most?

Sometimes doing a remix is a great way to get the creative juices flowing. It give you a springboard from which to leap into the unknown. Doing a remix and an original track are both very rewarding but an original mix that get the hands pumping definitely wins by a hair!

Are there any dream collaborations, specifically with relevant touring artists like yourselves?

That’s a tough one. There are so many influential and talented producers out there. It would be an honor to collaborate with any of the big names, just for the learning experience itself. I think what would be great is if we could collaborate with up and coming artists such as ourselves, whether it be vocalists, musicians, producers. Try to help each other on this ever evolving journey.

In terms of what’s next, what should we be on the lookout for?

We hope to spend more time in the studio in the upcoming months. Probably release another single or two that didn’t make it onto the album. I guess you’ll just have to wait for our next “story”.

Any departing words for our readers?