When I read about Elliphant for the first time, it was by way of a Red Bulletin editorial, and as I’ve learned: She hates it. We’ll get into that in a moment but first, if you’re not familiar with the Red Bulletin, it is the 5-year-old sports focused magazine produced by Red Bull® Energy Drink. I have a free subscription. Klout hooked me up. On a positive note: Since then, in October, Elliphant’s music has surfaced on the commercial front quite literally. It was featured in a Sprint television commercial and in a 2014 motion picture called That Awkward Moment. Her Glasslands performance was amazing and the Swedish-born rising star was full of stamina and energy. She rocked for an hour straight and I don’t think I remember seeing her drink gallons of water to sustain either. From that moment, I knew I wanted to talk to her but ‘What would be the first thing to ask or tell Elliphant?’, I thought. I figured I’d let her know where I learned about her and this is what she had to say:

[quote]I was really disgusted with the photography,” Elliphant shared. “[It] Didn’t really show who I am but it was a really good interview. It was amazing but the guy who did the photography was terrible… almost like an American Apparel commercial.[/quote]

With a response like that, I knew I was talking to a rare, lionhearted talent. I was intrigued.

When I bring on people to do videos or different artwork that’s connected to my music, I always try to keep an open mind. Usually, I have an idea but I keep a very open space so that their creativity can be explored as much as possible and in this video, I wasn’t involved so much at all in that process. I was just interviewed — sort of — by the guy.

I think what he wanted to show was his idea like first of all just build the song colorful and crazy. She really wanted to show that you can change who you are as an artist. You can be who you want to be.

I think the video was well done and a very good representation of me but I don’t want to take the credit for it. I wasn’t there when they planned it. I was home.

What do you think is the most unconventional thing about you? Outside of your music?

I don’t think people think about it so much but if you come from like a broken home or if you come from something that you knew that you had to work around, you needed to make some changes, it wasn’t natural for you to go with your nature and you had to change yourself and you had to change your nature and your pattern, I think most people that have been through that knows there’s so much going on inside a human being. The only thing that I want to represent as a human being is the fact that I am a person who will change constantly. I will never put myself in a box and my albums will never sound the same. I will always be a roller coaster because I want to represent reality. I want to be wrong and I want to be free to speculate about things and think something one day and regret it the next. [I want to] be open with that to my fans, and like show a good example to all my people out there who give up on themselves. I really want to stand up for nature and animals in my career, in whatever I do, I would focus on that. I actually believe it’s a really important thing. There’s not so many musicians, especially in the pop world, looking in that direction. It’s not so much credit to be good. The record labels usually don’t really like when people stand for world peace and stuff like that. They’d rather bling-bling, clubbing, money-money and stuff like that.

Your music has a very heavy reggae influence and I think it’s easy for anyone to just throw a genre in there and say what it is that they think you’re influenced by but how would you describe your sound?

You spent some years in India as a young girl. I’m not sure if you know but Bollywood is coming to Hollywood. Do you see yourself adding any Bollywood musical influences into your music?

Yeah, a little bit of course! It would be cool to. Really Indian music in its whole, as like the attitude of Bollywood, is really amazing in contrast to Hollywood. Hollywood is really very serious… the only thing they got in common is the plastic surgery, really. In Hollywood and Sweden and stuff, people are scared of hi-fi, they can’t even laugh about shit. In Bollywood Laughing and joking around, you know, kissing, being cheesy. It’s really really good contrast to the world and I’ve been a big fan of Bollywood. I don’t know. Musically, I don’t know. It’s not something that naturally I’m dying to. Not so much. I’m more so into African culture music and things like that actually.

You have a very unique speaking and singing voice. Did you always love your voice?

No, I don’t think so. I remember when I heard my voice [for] the first time I was doing a documentary in school. I think it sounds terrible. Especially like in radio and stuff, I usually sound really stupid sometimes. If you would just hear me speak for like one half [of a] minute and you didn’t listen to the whole context of it, you could probably think I was just like a loose girl with chewing gum in my mouth. My singing voice is like something that I just recently started to bet and learn how to use. I don’t have voice control whatsoever. 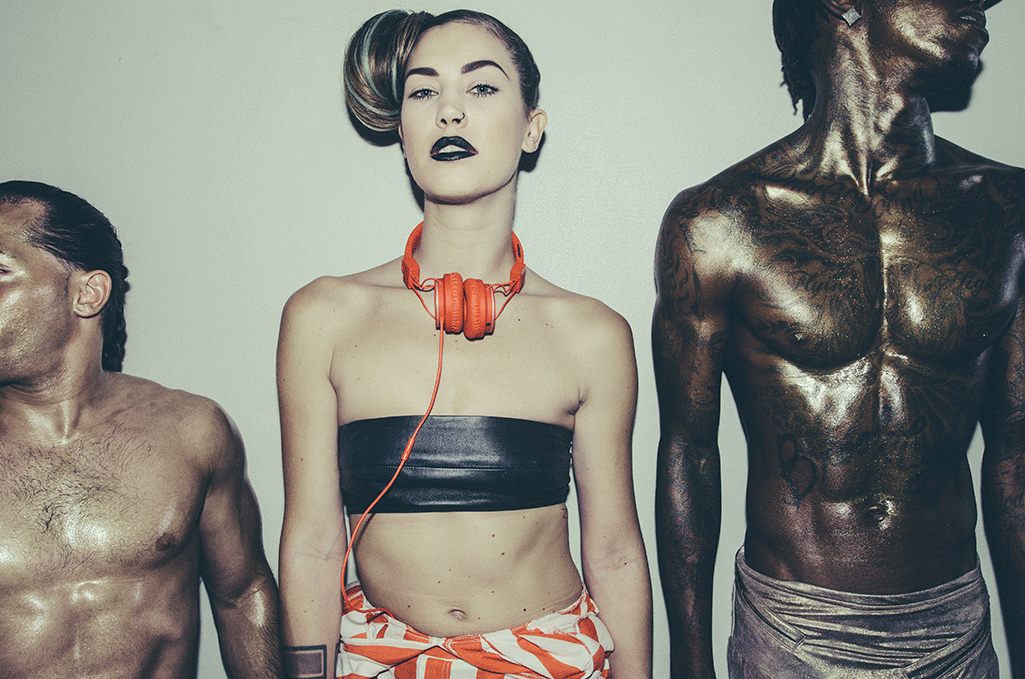 Well, we think your voice is awesome. Just so you know that! I think it’s very definitive and as soon as we hear it, we know it’s you as soon as you start talking.

We also saw you at Glasslands and you performed like an hour set. How do you keep that stamina… to just keep going? It was just you for most of the time. Your voice didn’t crack or anything like that. Can you talk to us about the preparation for something or does it come natural?

She laughed, “You’re so funny. There’s no preparation. I never really did any choir. I never thought I was going to do this. For me, everything is about mood and how I feel. If I get a good response from my my people, it will be like a mirror for my performance. It’s like sex, you know? Sometimes you have sex with someone and you just feel like ‘This was good’, you know? That happens sometimes. You know, often, I’m like struggling but it doesn’t work, you know, but if I get like if everything just works out, you have no idea. When you go onstage, you’re like an hour ‘Are you fucking kidding me?’ You have no idea what happened up there. It’s like you never… It’s just rushing by and then, it’s over. You’re like ‘What the fuck happened?’ You just feel so full and so empty. Really actually very similar to a sexual experience for me and it’s just fucking cool. I just think Whisky is really cool. I always expect some Whisky. I try to talk before… I try not to sit and be quiet. I try to do my makeup and have people around before I go up onstage. The thing is that Glasslands show, I didn’t have a show for a long time before that. It’s been like a month or something for me offstage so I was so excited. I had like three shows in a row and all of them… Like I just couldn’t hold onto myself. On tour, I will probably control myself better to keep energy.

*Elliphant is now back in Sweden and she’ll be back in the States late August. Until then, read her lyrics to my favourite song “Down On Life” on RapGenius.com. I had the pleasure of adding them to the site. Then, watch the behind-the-scenes footage of “Music Is Life”. I think it’s a good perspective on who she is as an artist.