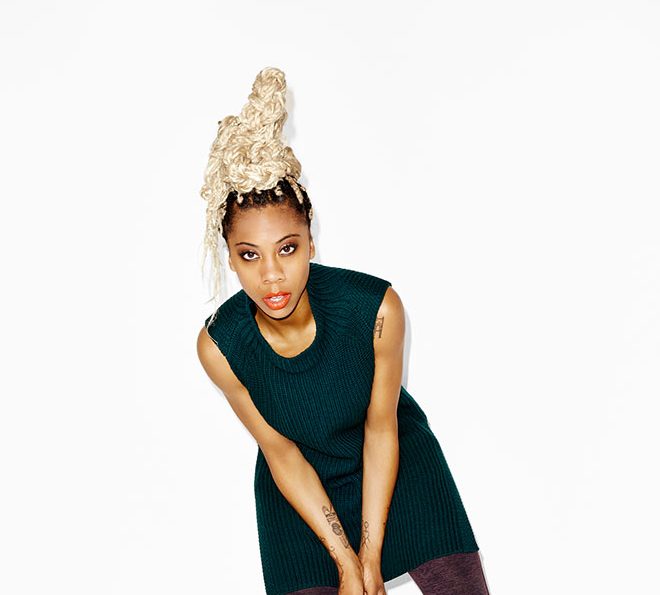 hen on my late night binge surfing was in full swing, I’d come across all types of characters, influencers, musicians, artists in general and just clear-cut interesting people. BOSCO is a name that I’ve been familiar with for a very long time so when I was received an invitation to interview one of Fool’s Gold’s newest artists, I knew it would not only be a good time to reconnect, but it would be an awesome way to start a new beginning. In the lobby of the Omni Hotel, Tania Espat and I talked to the visually and sonically experimental artist about rebranding, her new sound and going on a brief hiatus.

Tell us about your current sound. What have you been up to lately?

What have I been up to? I’ve been creating and finding different sounds and textures that I can resonate with. I’ve been making Dance tracks, some experimental R&B and I’m making art and visuals that can compliment that. It’s a mixture of House, Electro, Dance and sexy kind of stuff.

You’ve been around for a while. Can you tell us about your beginnings, and how your career has been so far?

I started in late ’08 or ’09. I took a break and did little side projects: They were like EPs, Indie Rock EPs. I also did a very chill, Classical-like EP. Other than that, I’ve just been experimenting and trying to find my sound. I really think that these past two years have been more of a redefining moment in my music, my art and my visual art. It’s starting to make more sense and become more fluid. Remember when you first started and you’re enthusiastic about everything. When you’re starting off, you are exposed to a lot of things that you don’t know how to filter. Still, you’re trying to figure out what’s needed, what’s suggested and what’s wanted. I’m at a point now, where I’m going to use what I know, and apply that to now.

People can burn out easily.

Yeah, I had to disappear. I know how that feels. I feel like it’s important for an artist to take somewhat like a sabbatical and really take time to figure out what they want to do, what they want to say, how to execute it and how long it will take. That is what’s needed. I had my run from ’08 to 2012 and then, I just disappeared. I came back about two years ago. I’m just floating around with it.

We were used to seeing your name everywhere. Whether it was in Los Angeles, in the East Coast or with our girl, Suzi Analogue.

Oh yeah! We reconnected. We haven’t seen each other in a while and I’m really loving what she is doing right now. We started around the same time. It’s kind of crazy when people listen to our stuff and they think it sounds new, but it’s been around for a while. It’s coming to your own. When you’re coming in as a new artist, you’re just inexperienced and excited about everything. I feel like, with Suzi Analogue, we both dealt with experience of the blogs, the interviews and the gifting. We know what’s tight, what sells and what people are going to dig the most. Also, staying true to yourself. It’s something that can be said about a seasoned artist, and knowing exactly what they want.

Do you think rebranding yourself was needed in order to do what you’re doing now?

I think the industry wasn’t ready to accept it back then. It was the art and artists like J*DaVeY and Nikki Jean. It was Black Alternative, Experimental music. It was very new and they didn’t know how to market it. Now, 6-7 years later, we have an industry that is open to accepting these type of artists. It’s not that you have to take a “L” but you have to understand that at some situations, you are the tastemaker until the industry can funnel out the talent. We did all of this stuff. It was very DIY, very grassroots and mom-and-pop (small business). The blogs that were f-cking with me back then, were on the forefront, on the turn of the culture. Now, it’s like seven years later. The others liked us later but you’ve been telling them that we’re dope.

Do you think that it’s accepted now in society that you had to change your sound?

That’s a good question. I feel that, the visual and the brand matches with the music. I also feel that as you get older, you become more mature as an artist. So when it comes to whatever that you are presenting on the outside goes hand and hand with the look and the growth of the music at the same time. I did a little bit of adjusting, but more like personal development.

Why the name change? Does that go hand in hand with what you just said?

I felt that the Brittany Bosco thing was needed for that time, but all of my life, I’ve always been called, BOSCO. It’s literally my name. Since then, it just stood out. With me coming into my own and figuring my out my sound, there needed to be a change. Brittany Bosco was this, and now she’s BOSCO. It’s like a visual identity and a personal development change.

It’s almost iconic. When we see the name in all caps, it feels like it means something. The name is recognizable and can affiliate with who were then and who you are now.

I never looked at that way, but it’s cool.

I literally thought, “Is this the same GrungeCake that I was fucking with before?” I just find it amazing on how the world can reconnect you with people. When it came to mind, I was really hoping that you were the same people and hopefully nobody took the name, by ripping you off.