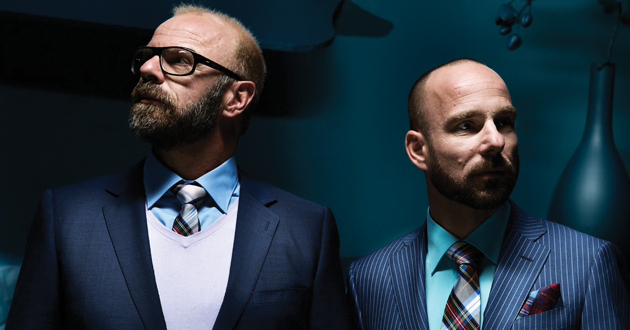 GrungeCake visited Rob Gaasterland (Adani) and Daniël Testas (Wolf) in their studio in Amsterdam and picked their brains about music, books, travel and of course their latest album.

GrungeCake: How did you guys meet?

Rob: We met each other at a football game about 15 years ago. We were both working in music.

Daniël: I was making techno music.

Rob: And I was more into live music with the jazz-dance band “Hit The Boom!“. “Hit The Boom!” was quite successful, but they wanted to keep going down the same road and I wanted to try new things.

Daniël: I was also looking for a new direction, so we decided to cross over to each other’s musical styles; a fusion between live music and techno. We started out with Project 2000 and did jam sessions that combined Drum and Bass with live musicians. From that Adani & Wolf evolved.

GrungeCake: So what’s with the name “Adani & Wolf“?

Rob: We made up the name during a flight. We had to come up with a couple of pseudonyms for a compilation album that contained several tracks written by us. We read the name “Adani” in a newspaper on the plane, it was in an article about a baseball player, something like: Adani hits again.

Daniël: “Wolf” is actually my father’s last name, but in the Second World War, he was adopted by the family “Testas” and he took their last name. The track from the compilation album with the alias Adani & Wolf turned out to be a new start for us.

Rob: Whatever we do, it’s always a challenge and a new adventure. Sometimes we reach a dead end, and we have to retrace our steps and try something different. We do move with the times, but we keep it broad. Our music can withstand the ravages of time, it will never be outdated. But, people do say that what we’re doing now is the best yet.

Rob: This is “Adani & Wolf 2.0”. Not only do we produce our own music, we also have our own label now. This means it’s not just a creative process, but we also need to run a business, which is fun and challenging. This label gives us the opportunity to release music that otherwise wouldn’t be released.

Daniël: Your own label gives you the opportunity to work faster. When we are working on a track that is not suitable for the album we’re composing, we just put it in the waiting room for another project. And these times are perfect for it, since its release on the 27th of September “Electric Dandy” has been available on 105 download sites worldwide, including iTunes, Amazon, Beatport and of course our own site: http://www.adani-wolf.com

GrungeCake: On your website, you mention several elements that are part of the Adani & Wolf lifestyle like fashion, jewelry, interior design, vintage gear and movies, but I’m missing books here, yet I can’t imagine versatile men like you not being readers. What books inspired you?

Daniël: We do read a lot. I love Jack Kerouac’s “On The Road“; I even made that trip myself. I also like Jerzy Kosinski and John Steinbeck. Books create a state of mind we can produce music to. The text of our song “Strange Light” [Electric Dandy] is based on a book about a concentration camp by Primo Levi. It’s very inspiring; even in the worst of times and the toughest situations there are sparks of light, blue skies even.

Rob: Our song “Valentino” [Electric Dandy] is based on the main character in “What is the What” by Dave Eggers, about one of the Lost Boys of Sudan. The tone of voice of the book is very airy, even awful things are told in a matter of fact way. Despite everything, Valentino sees the good in people, like when he has managed to escape the Sudanese war and lives in America and he’s robbed in his own house. Even then, he tries to put things in perspective by thinking the burglars need his things more than he does.

GrungeCake: Travel is also a part of your lifestyle, in what way have you been influenced by the countries you’ve visited?

Daniël: Places have a certain dynamic; you listen to it, open up to it and use it in your music.

Rob: For one and a half year, we’ve had a studio in Andalucía in Spain. Andalucía definitely has a certain influence on us: different music comes out of our hands there.

Daniël: We also love Brazil; the warmth of the people and the spirit of the country. There is music everywhere, and everybody is singing. Brazil is like a warm bath.

Rob: We can really relate to the Brazilian word ‘Saudade‘. It’s hard to describe, it’s a kind of nostalgia and melancholy, like a deep suffering. Saudade is everywhere.

Daniël: Also in our music, such a dose of melancholy is not unusual.

GrungeCake: Is spirituality important for you guys?

Rob: Yes, we wonder how far we can go, and to what extent we are still open to everything. We want to take our music further, we want to go deeper.

Daniël: Only when you have listened to our tracks several times, a new level emerges, we pay attention to that.

GrungeCake: Back to inspiring places.

Daniël: The other day I was in New York, the energy over there is so different: big, fast, high. I really want to do something with that.

Rob: In New York, everything comes together; the hustle and the bustle.

Daniël: London has yet another atmosphere; they work really hard there, they go on until it’s right, whatever it takes.

Rob: In the Netherlands, they tend to watch the clock too much.

Daniel: One day a week, I teach songwriting and producing at the conservatory and I really try to convey that London work ethic.

With another journalist waiting to interview the dynamic lounge producers, the conversation reaches its end. As a farewell present we get to share Day In Day Out, the second track from Electric Dandy, with the GrungeCake readers.

In their studio, Adani & Wolf have an interesting selection of vinyl, including the likes of Bach, Bruford, Mick Jagger, James Brown, Joni Mitchell, John Lennon and Patti Austin. Whenever they feel a track needs something extra, Rob stands next to the record cabinet, closes his eyes and starts swinging his arm. When Daniël says ‘stop!’, Rob picks the record closest to him. He then puts the record on the record player and moves the needle over it. Again, he waits for Daniël to say ‘stop!’ and drops the needle when Daniël does. The sample that is chosen that way is chopped up and mixed in the song.

Last week, on our Editor’s birthday, Adani & Wolf posted this blog on their website and this interview is mentioned. We thank you! For more about the group, kindly visit this link.