Every day of the week, I receive the weirdest and coolest emails available on this planet. There’s no question. My colleagues wouldn’t react the way they do when they hear about ‘em. 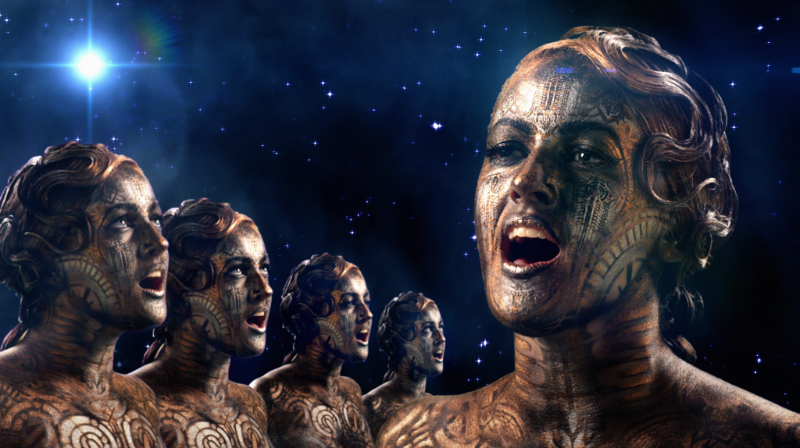 This round, on the cooler end, comes “Starman” by IAMEVE. Apparently in this technologically advanced visual, IAMEVE is a mysterious creator who tells her story from a painting she lives in. Check out the new fantastic video from “The Everything Nothing” extended play.

Finally, the music video was directed by Thor Freudenthal, who also worked on “Percy Jackson” and “Diary of a Wimpy Kid.” IAMEVE’s love interest is played by Keon Alexander from “Tyrant” on the FX channel. The body paint is by body artist Michael Rosner.

At first glance, I thought I received another promo email for QUIÑ’s recent release, another galactic-obsessed Los Angeles-based recording artist. As a result of what has been called a massive accident, IAMEVE’s bionic elbow left her unable to play the piano and guitar.

“Lying there still, it caused me to open up to untested ways of creating because I needed a new set of tools to keep going. Electronic production had always been a passion and something I had experimented with, but this caused me to move fully in that direction. It freed me up and gave me an entirely new soundscape that feels so much more in tune with the world I am creating,” she recalled.

IAMEVE is a spell-binding storyteller who merges electronic music textures and visual dreamscapes. “Starman” was co-produced with David Christophere of the classic electronic music outfit Rabbit In The Moon, and the video was directed by Thor Freudenthal (Percy Jackson, Diary of A Wimpy Kid). The video’s Starman is played by Keon Alexander, beloved on FX’s Tyrant. The surrealistic love story is told in this mesmerizing music video, with IAMEVE painted in sacred geometry by body artist Michael Rosner.

With influences including Rodin, Bowie, Terry Gilliam, Dali, Kate Bush, Geiger, Lewis Carroll, Tim Burton, Tolkien, and Dune, “Starman” and upcoming, The Everything Nothing video series and EP will extend the fantasy of inner and outer space across Los Angeles and beyond.