The title may be off-putting but this project is about something.

As a follow-up to his mixtape released seven years ago, “The Mixtape About Nothing,” Wale gives us The Album About Nothing. On the album, the MMG rapper gets some help from the one and only Jerry SeinfeldThe Album About Nothing. Laced with little tidbits of knowledge from Seinfeld about life experiences, the snippets are precursors to the following track. Collectively, for his fourth studio album Wale has put together his best album to date. The self-proclaimed “Savior of the DMV” may have gotten it right with this release. 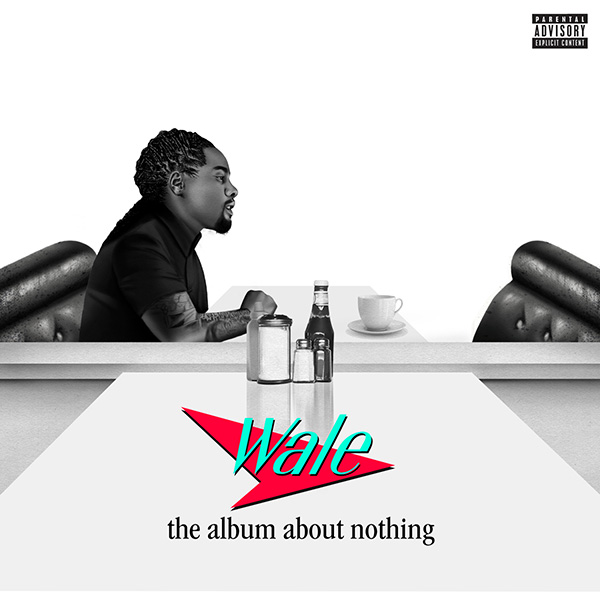 Earlier this year, TAAN was No. 1 on Billboard 200 charts, his album “The Gifted” the only other to place high on the charts. Wale is a different type of rapper, as his portrayal in this and previous works. He is known to receive some criticism for not being more like his MMG label mates, which you can tell fuels a couple of tracks on the album specifically, “The Middle Finger.”

“F-You, leave me alone,” he flatly sings in the on the chorus of the song. Telling you with all honesty, how he feels about comments and why he doesn’t mess with a lot of people in his same arena. Like so many rappers these days, Wale also loves to showcase his vocal skills on many of the tracks singing on choruses and hooks. On “The White Shoes”, he belts out the lyrics:

”Take this good advice / They gonna judge you for life / Say we can’t always be right / We ‘gon be good long as those sneakers white.”

The song is a clear message about how clean shoes are a status symbol around the way. And sharing about his affinity for the shoe culture (Wale is a serious sneakerhead if you didn’t know). On the other hand, some of his tracks on the album give you stories of overcoming confidence issues, lady problems and the struggles of growing pains as artists. In the essence of classic Wale, some of the ladder tracks on are for heavily R&B influenced “The Matrimony” featuring Usher where Seinfeld likens marriage to a rollercoaster. On this song also, you can find Wale speculating on why he’s not found true love, as he spills on his past relationships and regrets.

“The Need To Know” featuring SZA gives you another look at the classic contemplative side of him. The possibility of crossing over from the friend zone to something more, Singer SZA sings the lines from Musiq Soulchild’s hit, “Just Friends” (Sunny). While, “The Body” featuring Jeremih is another song comparing a woman’s physique to an automobile, it’s undeniably a hot slow jam for sure. However, about other tracks is he is looking for love or lust?

Further, into the album, we get “The Girls On Drugs” — A fan favorite, that was on his collaborative mixtape with A-Track, “Festivus,” which released at the end of 2014. A track mixed with claps, a catchy beat and samples Janet Jackson’s, 1997 hit, “Go Deep.” A song dealing with girls who use drugs to deal with emotional pain and issues.

This body of work may be the career defining for the DC-born rapper. Throughout TAAN, you find him trying to explain himself. A lot of people felt Wale had fallen off, musically, trying to be something he wasn’t in his previous works. Although, some of his songs are a bit one-dimensional, what he lacks in he makes up for with good beats, help from a few friends like J. Cole, Usher, and SZA, who put nice added touches on the project.

The title may be off-putting, but this project is about something. Collectively, The Album About Nothing is a creative project, displaying honesty, thoughtful lyrics with pretty good delivery.It’s giving you just enough insight to scratch the surface into who Wale is as an artist.