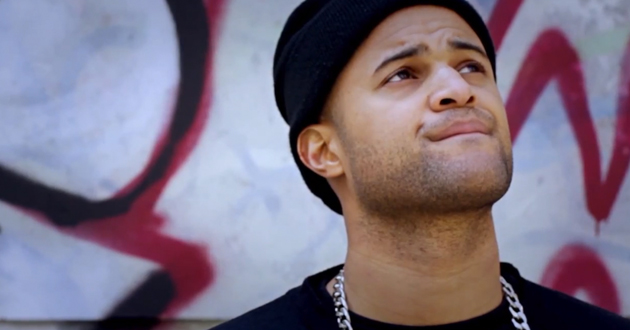 Homeboy Sandman’s eclectic video for “Peace & Love” is indirectly and directly highlighting the disconnect of relationships and culture in today’s society. The video showed the melancholy and angst of 21st century couples with the use of four individuals.

One couple which held hands and when separated, thought of each other, while the other ambiguous couple looked off into the distance. The couple was so distant in fact, that you didn’t know they were a couple until they embraced and kissed for a moment after the first couple left. Then, they separated immediately afterwards with no trace of affection, until the girl finally wanders off and Homeboy Sandman stands alone. The colorful interchanging backgrounds of the video, mixed with the psychedelic sounds, and rainbow silhouettes gives the viewers an innovative visual interpretation of the lyrics.

The message, as Homeboy Sandman delivers:

[quote]It’s no wonder why we in rots /
Seems we bein’ in the rot /
Just for being tough and rather we keep it tough /
Than keep in touch, ah[/quote]

This thinking is what creates unnecessary distance, between people and in our culture instead of the “Peace & Love”.

The song resembles the 60’s Rock music era of The Beatles fused with Homeboy Sandman’s thoughful brand of lyrical Hip-Hop. “Peace & Love” bridges the sociocultural gap in music, and pinpoints the flaw in ourselves, immediately making the song an effortless classic.